An Issue Cannot Become a Risk

Can an issue be a risk?

Everyone knows that a risk is an uncertain event that hasn’t happened yet has some probability of occurring in the future. An issue is an event that has already happened.

Risk empowers us to think proactively and gives the opportunities to develop the mitigation plan to minimize or avoid the risk of turning into an issue. An Issue is essentially a risk that has happened but it cannot become a risk.
The simple fact of this theory is no U-Turn or Undo button. It is a one-way route. The only stop on the route is the “lesson learned” whether the risk becomes an issue or not.

“Lesson learned” is not the dead-end of the route. There was a speculation that the same issue is bound to happen again, so the issue can become a risk again. WRONG. The answer to this speculation is to observe this event and register a new risk instead of re-opening the case. By registering a fresh risk, there can be a very favorable chance to come up with better mitigation plans from the lessons learned from earlier similar risk/issue. Lesson learned should always be applied to the new risks for a better survival rate.

Is there any “Undo Button”?

To be more specific, the two-wheeler accidents without helmets are proven to be dangerous. When the event has happened to you, there is no “undo button” to turn the issue into a risk again because the event has already occurred. When you foresee the risk of two-wheeler accident bound to happen again, you use the lesson learned about the safety of using a helmet that can protect your life from the accident.

What have you learnt?

The “Lessons learned” can be documented information by reflecting both positive and negative experiences of the risk / Issue. Lesson learned information can include the following points to redefine the repair plan such as: 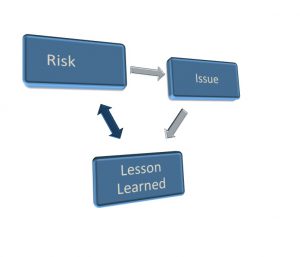 Thoughts on “An Issue Cannot Become a Risk”