The ability to create different versions of hierarchies within Oracle Data Relationship Management (DRM) is one of the tool’s biggest benefits. The definition of a version is simply the grouping of hierarchies. This simple, yet effective, function allows organizations to create versions for several different types of scenarios:

The most common use of versioning is to provide historical views of hierarchies, coinciding with the business reporting cycle – usually monthly.

In the example below, we can see two versions. One for March 2017 and one for February 2017. Both contain the same hierarchies, but March contains the most recent version of the hierarchies with changes applied.

Now you may be wondering how easy is it to create the next month’s version, say April 2017 in our example? Well, with a few clicks the process can be completed within minutes!

The time savings comes from the fact that the April version doesn’t have to be created from scratch. We simply copy the March version and rename it.

This is accomplished by modifying the version status from Working to Finalized. (Finalized status prevents any changes from being applied to the hierarchies and properties within the respective version.)

Next, change the Version Status value to Finalized. Click Save. 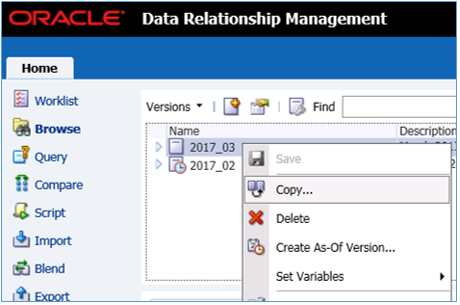 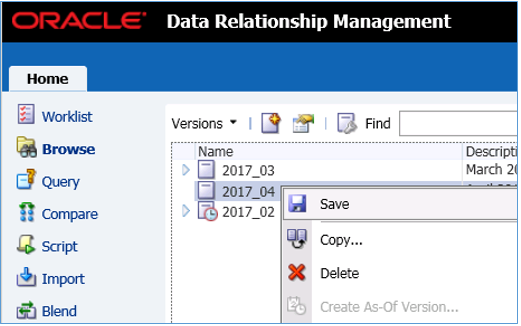 Blue check mark in the Saved column indicates the version has been saved to the database.

Now users can begin applying changes to the April version.

Stay tuned for the next post where we take a look at some of the more in-depth aspects of DRM versioning!

Steve Bogner is Project Manager with 15+ years experience within Perficient’s Corporate Performance Management practice. He is certified in several technologies including Oracle Data Relationship Management and Oracle Enterprise Data Management. He is constantly striving to ensure successful experiences with CPM technologies for his clients.