It’s been a while since the last release of Sling CMS. The latest release, 0.14.0, brings tremendous new capabilities and dramatic improvements to the authoring experience to Sling CMS.

The Sling CMS Reference project already includes a lot of the base components but didn’t have a good solution for building forms. Conceptually, forms are composed of three parts:

Form Value Providers are implemented as a Sling CMS Component coupled with a Java Class implementing the FormValueProvider interface.

Form fields are used to display the actual fields in the form. Examples provided include:

Form Fields are implemented as a Sling CMS Component coupled with a Java Class implementing the FieldHandler interface. The FieldHandler implementation should handle all of the aspects of handing the field including validation.

Form actions handle the results of the form submission. Similar to the other form components, they are composed of a Sling CMS Component and an OSGi component implementing the FormAction interface.

There are three implementations provided with the reference application, including:

Image Transformations are stored underneath sling:File assets as renditions and internally are used by Sling CMS to render the grid view.

I use Sling CMS for my personal site, so the authoring experience has a direct impact on my productivity. The focus of this release was to make tangible improvements.

One of the more annoying features of Sling CMS before this release was that to reorder components, you had to use the move icon and could only move them within their current container.
With the latest release, you can reorder components within a container or into other containers by just grabbing their edit bar.
Some of the authoring experience improvements include:

In previous versions of Sling CMS, the only view of content was a tabular display. This worked pretty well for text content but wasn’t visually appealing for images and assets. The new grid view is the default for Sites and Static content but can be toggled off or set as not default in the user settings. 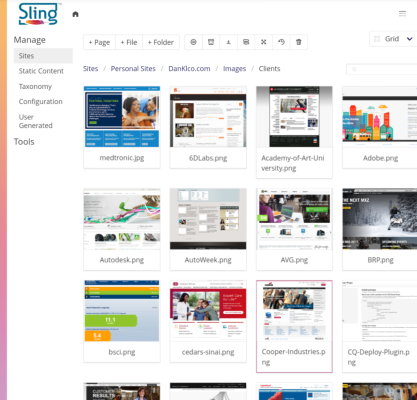 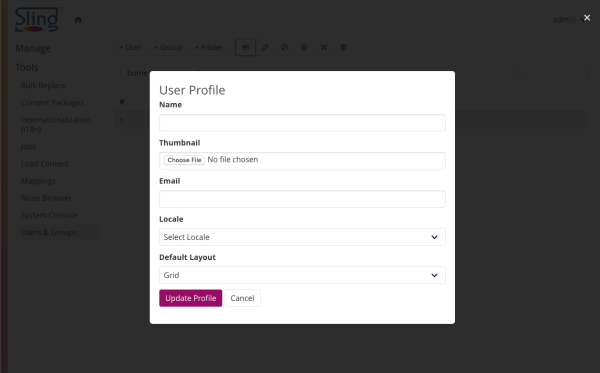 I’ve tweaked the user experience for the editor to make a number of small changes and generally make it cleaner and more modern looking.

Sling CMS is already easy to set up with the Vagrant and Docker images as well as it being a single JAR download. With the release of Sling CMS 0.14.0, developers will be able to create projects for Sling CMS with a single command:

Looking to get started with Sling CMS? Download the latest release from GitHub.