The Apache Sling project recently announced the latest version of our runnable distribution, Apache Sling 10 or Apache Sling X if you are a fruit company fan. And much like the latest fruit product release, this release of Apache Sling is 32% skinnier and costs 200% more, after all, it’s still free!

Apache Sling 10 introduces a number of tweaks, enhancements, and whole new features, some of the highlights include:

What are Service Users?

Service Users are a solution to a flaw in the old security model in Apache Sling. It used to be that whenever you needed to run code which wasn’t specifically tied to a user session (think Sling Jobs) you used slingRepository.loginAdministrative(null) to get a session. The problem here was that the resource resolver returned is logged in as admin and had superuser rights for the entire repository.
Of course, as admin you could impersonate another user, but most developers happily wrote code using an administrative session.
Service Users were introduced to allow OSGi services running in Apache Sling to retrieve restrictive permission service users without needing to touch an administrative session. These Service Users are granted very specific permissions within the Apache Sling repository.

In Apache Sling Starter 10, you can access the Service User WebConsole by navigating to Service Console >> Sling >> Service Users or navigating directly to http://localhost:8080/system/console/serviceusers.
The initial screen shows a form to create new Service Users as well as a list of all of the current service users in the Sling instance: 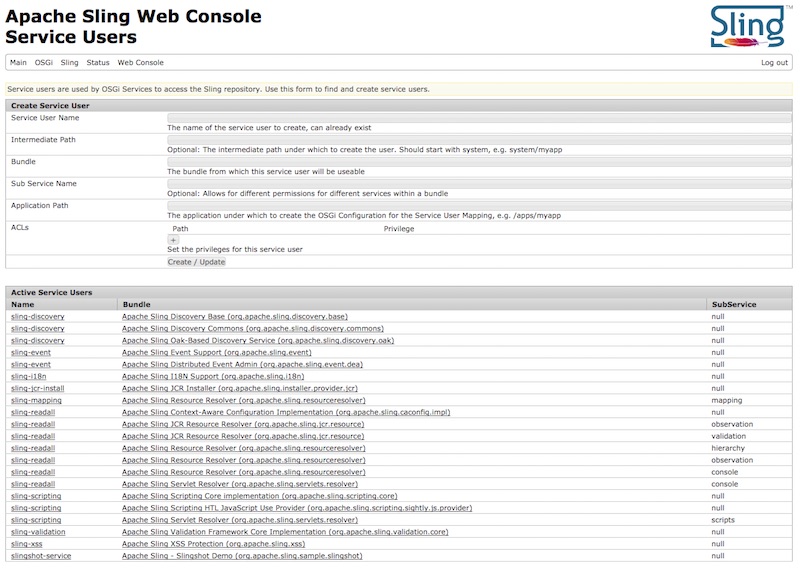 Simply fill out the form to create a new Service User.

Generally, you’ll fill out all of the fields including:

Once you click create, the Service User will be created (or updated) and the ACLs will be applied. This will then direct you to a details page showing the details for the Service User.

This page will show detailed information about the Service User as well as examples of Package filter.xml settings and example(s) of using the Service Users from an OSGi Service.

Apache Sling Starter 10 can be downloaded from the Apache Sling downloads page. From there just run:

To start the application and in a few moments you can browse through the documentation on the refreshed landing screen and use Composum to explore the Apache Sling repository!