#Lync and the Impacts of Windows XP 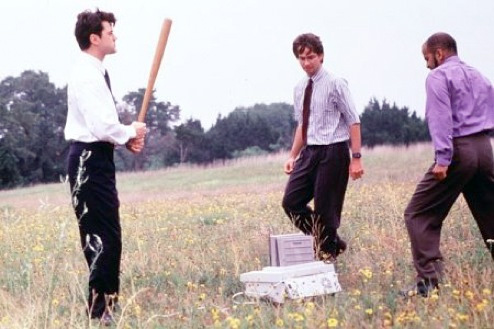 It’s no secret Microsoft is doing the same to XP as the bad boy trio from Office Space did to that poor Printer.
The deprecation of XP will have an impact on organizations for various reasons, some of which I’m not qualified to speak in depth about, but a key topics on the wire as of late is particularly around security. Without a steady stream of updates and patches, you leave your environment largely susceptible to attack. 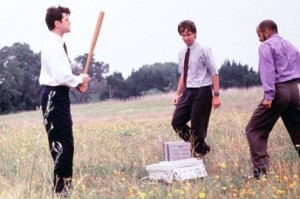 I can speak more intelligently and qualified around XP in the workplace and how it works with Lync…or how it DOESN’T really, kind of a little, maybe…work with Lync. Huh?
Let me explain. The Windows XP OS has been dropped from backward support-ability with Lync Server 2013. Microsoft knew long ago, XP was going to be killed off during the reign of Lync Server 2013, so they are essentially forcing your hand to upgrade. It’s a fair hand to be played in defense of Microsoft, at some point we have to move on and put to rest the aging systems to focus on improving existing and future releases, so don’t look at this as a strong arm play by Microsoft, it’s just simply evolution.
If you are considering the move to Lync Server 2013, understand that any pockets of existing XP machines need to be upgraded to at least Windows 7 for the Lync 2013 client to install. If you do not upgrade, your users will be left with Lync 2010 or OCS 2007 R2 (MOC) client and that’s not cool.
Start reviewing Client Interoperability and Support here.
Keeping Lync 2010 client in your environment because of XP is not ideal. It works and its supported, but its just not perfect. Expect that you will find feature and functionality caveats and shortcomings, plus multiple support streams and image packages. Yuck!
If you are upgrading from OCS 2007 R2 Platform to Lync Server 2013, another knock against replacing the MOC client with Lync 2010 client just to justify the retention the XP OS, is user adoption. If you introduce Lync 2010, then plan to introduce Lync 2013 or maybe even the next rev of the Lync client over an accelerated timeline to get your OS’s upgraded, you essentially press change upon your users more times than needed. Change would essentially happen like this for your users:
1.) Introduce new Lync 2010 Client
2.) Introduce new OS
3.) Introduce new Lync 2013 Client
Simply put, this is not ideal.
If you hit the OS upgrade button now, change would look like this:
1.) Introduce new OS and Lync 2013 Client at the same time during the same roll out of a single package.
This strategy has much less of an impact on your sensitive user base.
The MOC client, however, is much much different.
First and foremost, you can’t join a Lync Conference using MOC. ALL you get with MOC, is IM and Presence, so that is an incredibly big disadvantage of using the MOC client as a stop gap.
Second, the MOC client does not support DNS Load Balancing as the Lync Clients do. This could cause an impact as well if you feel your users need HA. If you keep the MOC client on the desktops and move to a Lync Server 2013 back-end, you will need to configure or purchase an HLB to maintain SIP communication HA, no exceptions. All of this JUST for IM&P?
If you move to the Lync Client immediately, you can take advantage of the DNSLB mechanism built into the Lync client to maintain SIP communication HA. Keep in mind, however, HLB is still required for load balancing the web communications required by Lync, but sizing of the HLB can be dramatically reduced.
So the moral of the story, please look to upgrade as soon as possible. Your organization is only limiting itself by trying to squeeze every last breath from XP. The OS is dead, time to move on and allow the grieving process to run its course.

I currently hold the Microsoft Certified Master on Lync Server 2010 certificatoin and work as a Senior Technical Consultant at Perficient, specializing in Unified Communications design and deployments. My history in IT dates back 15 years with all my experience coming primarily from Microsoft Technologies. I believe the Microsoft Unified Communiations community is a very close and talented group of engineers who genuinely enjoy the technologies and collaborating with one another to help the technologies dominate the marketplace.