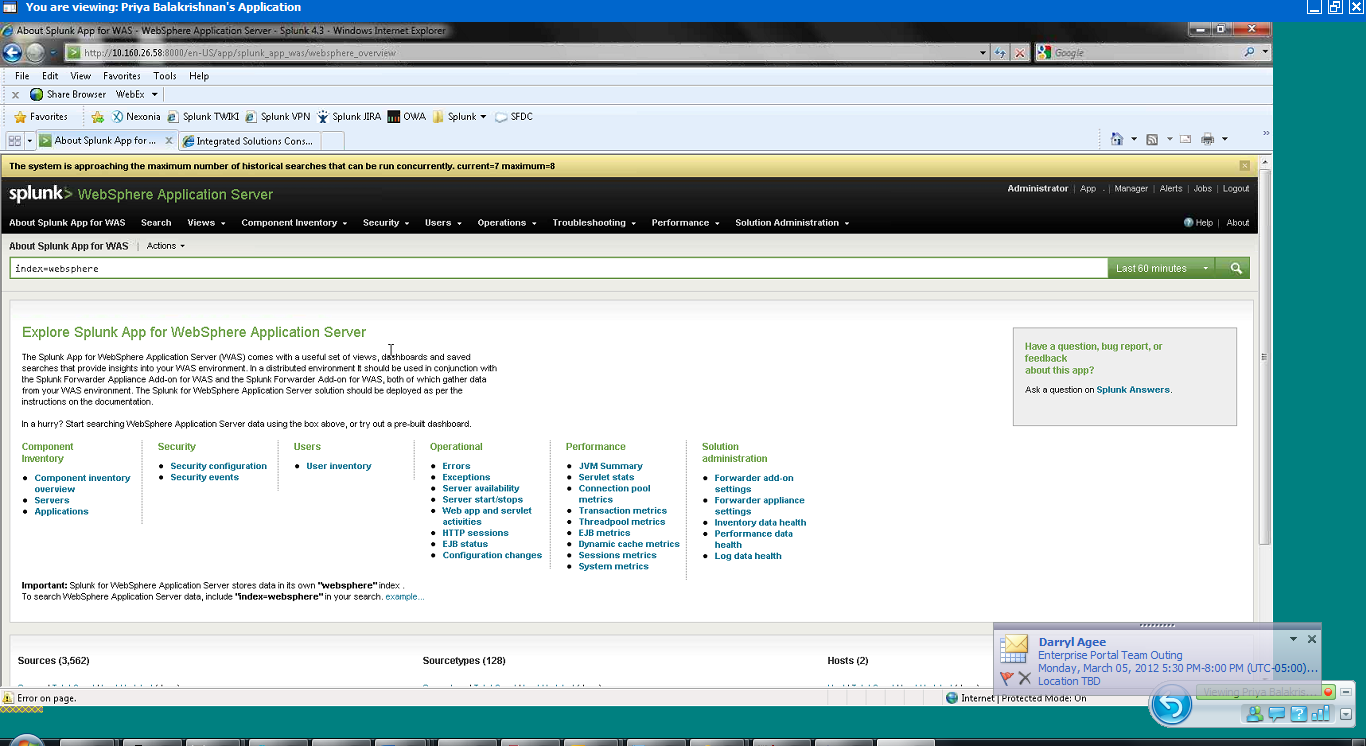 Splunk hosted a webinar earlier today on their Splunk for WebSphere Application Server 2.0 application. This is an application they wrote that extends Splunk’s already powerful capabilities to provide WebSphere-specific searches and reports.

If you’re not familiar with Splunk, you should take a look. In a nutshell:

Your IT infrastructure generates massive amounts of data. Machine data – generated by websites, applications, servers, networks, mobile devices and the like.

By monitoring and analyzing everything from customer clickstreams and transactions to network activity to call records, Splunk turns your machine data into valuable insights.

Troubleshoot problems and investigate security incidents in minutes (not hours, or days). Monitor your end-to-end infrastructure to avoid service degradation or outages. And gain real-time visibility into customer experience, transactions and behavior.

There are many questions that arise in typical WAS-based environments that this app will help answer, and answer very quickly. For example:

WebSphere Application Server collects a great deal of information in logs and in memory (JMX, PMI, etc). This is the raw information that is needed to understand how the environment is operating. However, it’s hard to get to that information and consume it quickly, correlate it with other information, and then resolve problems based upon it. A few of the problems we see frequently are:

Splunk and their app for WAS help solve those problems by easily collecting logs, configurations, and performance metrics for centralized searching and reporting. The main classes of information it collects and reports on are:

If you already have a robust monitoring tool for your WAS environment (e.g. ITCAM, Introscope, New Relic, etc), that’s great – keep using it. Splunk will complement it by filling in gaps around monitoring configuration changes or logs. And if you don’t have a tool to monitor your WAS environment…well, you should, and Splunk is an excellent option to fill a lot of holes at once.

So how do you try this out?

For example, WebSphere Portal logs by default to WAS’s log files (unless you enable tracing, in which case trace.log is also created). WebSphere Portal has its own set of informational, error, and audit events that it logs, and it will be fairly easy to set up additional dashboards in Splunk to report on those values. Similar principals will apply to WebSphere Process Server, WebSphere ESB, WebSphere Commerce, and many more.

Since Splunk has this handy app for WAS, it should make it relatively easy to build a Splunk for WebSphere Portal application. Hopefully that’ll be a future post.