Everything IBM Customers Need to Know about PVU

In 2006, IBM introduced a new license metrics called Processor Value Unit (PVU). PVU is a unit of measure which streamlines IBM licensing policies and contracts. I’ve found that these changes in IBM licensing jargon and calculations can be very confusing to IBM customers, IBM business partners, and IBM software sellers.

Before we deep dive into how PVU  is calculated and affects you as IBM customers, let’s start with some key terminology. 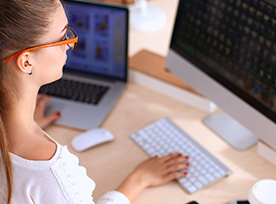 In a nutshell, socket is actually what the CPU chip is connected into via pins and leads. A core is full-blown CPU sitting on the chip. Basically, a single socket chip can have one, two, or four cores on it.

An Activated Processor core is a processor core that is available for use on a physical or virtual server, and regardless of capacity of the processor, can be or limited through virtualization technologies, operating system command, BIOS settings, or similar restrictions.

For Full Capacity licensing, the licensee must obtain PVU entitlements sufficient to all activated processor core in a physical hardware environment made available to or managed by program.

For Sub Capacity licensing, the licensee must obtain entitlements sufficient to cover all activated processor cores made available to or managed by the program, as defined according to the Virtualization Capacity Licensing Rules.

By default, IBM customers are subjected to full capacity licensing, which means they need to license all the activated physical processor cores, regardless of whether the IBM software actually uses all of the cores.

In a virtualized environment, IBM customers only need to procure PVU entitlements for those processor cores that are available to IBM software. 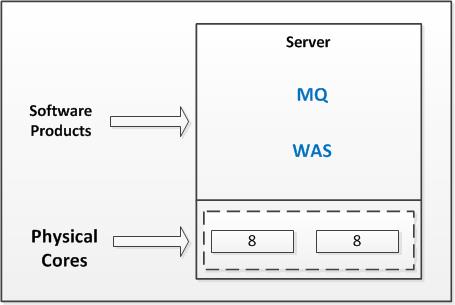 As shown in the above example, the environment is not virtualized. This will result in a Full Capacity license, which is counted as highest number of PVUs on the server where software is installed. As per the PVU table for above processor configuration, 70 PVU per core is assigned. The below table shows how Full Capacity licenses are calculated for MQSeries and WAS. An assumption is made for Price per PVU. 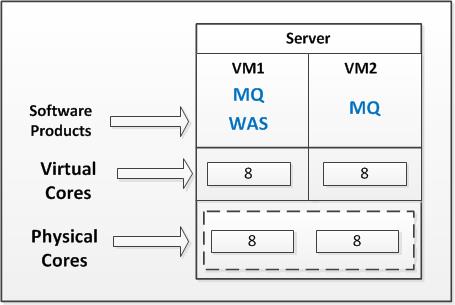 As shown above two virtual machines VM1 and VM2 are deployed on a physical server that has two Intel Xeon 3400 processors, each with eight cores. VM1 has MQ and WAS installed, VM2 just has MQ. Since MQ is installed on the both VMs it has access to 16 cores. The below table shows Sub Capacity license for MQSeries and WAS.

As you can see from above two examples, sub-capacity licensing can significantly reduce licensing costs for IBM customers.

Note : Some of the above definitions are taken from IBM.

Thoughts on “Everything IBM Customers Need to Know about PVU”