If brands and retailers were not regretting jumping on the social conversation bandwagon during the World Cup, they are now.  A month ago, the World Cup sparked the largest social conversation the world has seen.  And now that it has come to an end, it has not only produced the top team in the world but has broken records in the social space.  Sunday’s game smashed Twitter records and became the largest sporting event in history for Facebook. 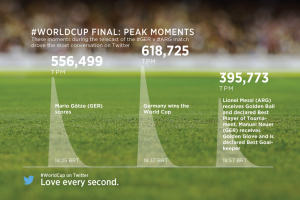 Twitter reports that Germany’s win over Argentina peaked at 618,725 tweets per minute totaling 32.1 million during the entire match.[1]  This beat the previously record setting tweets during a game when Germany beat Brazil earlier in the week.  Facebook also came in with record breaking interactions with 280 million interactions (posts, likes, comments) by 88 million global users during the World Cup final alone.[2]  This beat their previous record of interactions that occurred during the 2013 Super Bowl.
As one can see from my previous posts and the numbers report from the final championship game that consumers interacted with brands, retailers, FIFA and sponsors on a record-breaking level.  These numbers only prove the importance for retailers and brands to spread awareness and promotion by being a part of this social conversation.  Four years is an era in terms of technology, digital and social media timeline so it will be exciting to see how these numbers will increase exponentially come 2018!  Brands and retailers will have an even larger opportunity to reach the global audience during this amazing world event.
See you in 2018!!