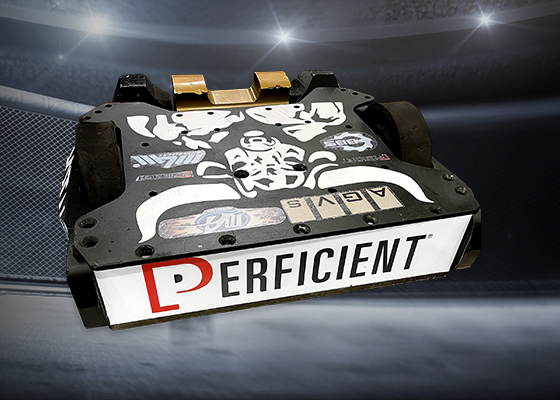 On the heels of the recent announcement that Perficient had partnered WITH A FIGHTING ROBOT, I sat down with Perficient’s Vice President of Marketing Bill Davis to learn more about what it’s all about, how it came to be, why he’s so excited about it, and how it benefits the robot builders and Perficient.

Bill, thanks for the time. This is a pretty interesting partnership. What’s going on here? 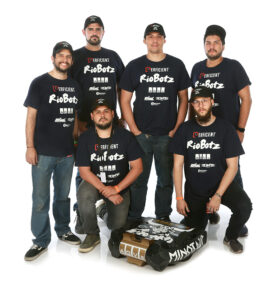 Hey Connor, thanks for the interest. This is certainly something we’re really excited about. We’ve partnered with a robot building team out of Brazil called RioBotz. They build many different bots, but their most powerful bot, “Minotaur,” competes in the world’s most popular robot fighting competition, BattleBots. The sixth season will be broadcast in prime time on Discovery Channel beginning January 2022. This season’s broadcast will air in more than 150 countries around the world, reaching tens of millions of fans across the globe.

Wow, fantastic – what exactly does the partnership look like?

Well, we’ll be very prominent on the bot as it competes – and the team will be sporting Perficient-branded gear like hats, shirts, and facemasks during the broadcasts. There are a few additional elements to it, but the brand awareness this will drive is what’s most exciting.

Fighting Robots is a pretty unique area to invest in. How did it come about?

The initial idea came from our Chairman and CEO Jeff Davis. He’s an engineer by education and was already a fan of the show. One day we were discussing how we might add to our various existing sports marketing partnerships – with the MLB’s St. Louis Cardinals, the NHL’s St. Louis Blues, Dallas Mavericks in the NBA and our partnerships with PGA and LPGA pros – and he just said, “We should sponsor BattleBots,” or something to that effect. I knew pretty much nothing about it, but when the CEO suggests something, you take a look.

So the next morning, I found one of the executive producers and reached out. We connected and the more I learned, the more I realized it was a perfect fit – global visibility, tens of millions of fans, and all centered around science, technology, engineering, and math. The BattleBots league and competitions are intense sights to behold: Teams using STEM skills to build really remarkable robots, each of them so unique and interesting, with the sole purpose of destroying other robots. It’s a perfect fusion of science and sport, culminating in some destructive results.

How did we pick this particular team and bot? 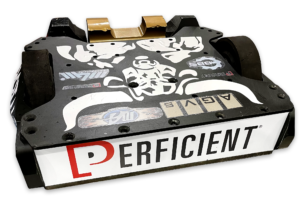 I connected with the producer just a couple months before filming of the sixth season would be getting underway, and he happened to mention that there were a couple of good teams that were still unsure if they’d make it to the filming in Las Vegas due to financial hurdles stemming from the COVID-19 pandemic. He mentioned one of those teams was from Brazil, and given our ongoing expansion in Latin America, I reached out to them.

When I met the Minotaur team from RioBotz, I knew right away that we had to support them and help them get to the competition. The team is incredibly nice, talented, and personable – mostly comprised of college students from a strong engineering university in Brazil. The team is a global fan favorite and has always performed well, landing near the top of the competition each year. We’re really excited to be partnering with them.

It’s expensive to build these robots, and when you pile pandemic constraints on top, it becomes a real challenge. For example, the team had to quarantine in Mexico for two weeks just to get into the U.S. for the annual competition – not to mention the costs of spending nearly three weeks in Vegas while the battles are filmed.

Again, we couldn’t have been more fortunate to partner with such a celebrated and resilient team. We can’t wait for the season to air.

So the fights have already taken place, but they won’t broadcast until January 2022?

Yes, that’s right. A few of us went out to some of the battles to get to know the team better and take it all in. It was incredible fun and really exciting.

So any spoilers on what happened? How Team Minotaur did?

Nope – sworn to secrecy, but I will say that we’re very pleased with how the brand integration has gone, how prominent Perficient is on the bot and the team’s apparel, and beyond that again just what a great group of STEM enthusiasts they are. I believe there were about 60 teams in the competition, and I’m confident we picked one of the very best to align with.

Ok, we’ll all just have to watch when the season kicks off in January. One final question before we close. What do you see as the major benefits of this partnership for Perficient? 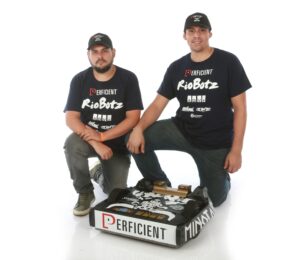 Well, I think there are several. First off, it’s an incredible spot to market our brand, particularly from a recruiting perspective. This competition is all about STEM and so many of the show’s fans are exactly the kind of person we’re looking to hire now or years down the road. There’s a big youth audience here, and they’re very smart, very capable. It’s not easy to build a robot that can fight like these do.

Beyond that, the sheer amount of brand impressions the partnership will drive will be a big benefit. In addition to the primetime show on Discovery Channel are the residual impressions from social and streaming platforms – some of these YouTube videos of the fights rack up tens of millions of views very quickly, and of course given the demographics, it’s all over TikTok, Instagram, and Snapchat as well. So, that fact that we’re so prominent on Minotaur is really fantastic to build brand awareness.

And finally, as I mentioned earlier, it was just the right thing to do. RioBotz is a celebrated team worldwide that deserves to compete in BattleBots. It feels good to know that Perficient was able to play a role in helping this team of talented engineers and robot builders from Brazil make their way to the event this season and do what they love to do – which is to compete with Minotaur. Being able to move so quickly and strike an agreement with them that worked for all sides was really a rewarding journey. I think we’re likely to be Minotaur partners and fans for many years.

That’s great. I can’t wait to see this innovative and exciting partnership come to life. Thanks for the time.