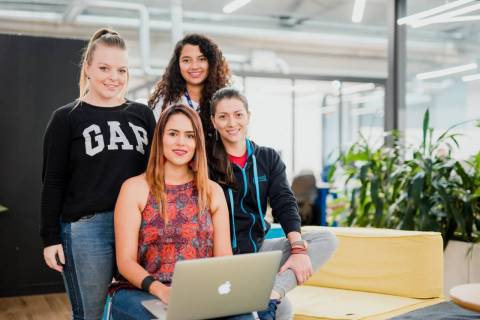 Take a look at how women in technology and science have been changing the landscape of the software development industry, both in Colombia and the rest of Latin America.

This article was originally published on Nov. 14th to celebrate Colombian Women’s Day, which was created to honor the Colombian Policarpa Salavarrieta who was an integral part of the revolution against the Spanish (and is currently featured on the Colombian 10,000 peso note.)

Gender inequality is both a moral and financial issue on a global scale.

The global wage gap between women and men has resulted in an overall wealth loss of US$160 trillion, according to a World Bank report published in 2018. If women earned the same as men worldwide, human capital wealth could increase by 21.7% and total wealth by 14.0%, the report highlights.

Judging by Latin America’s more recent focus on women in tech, many of the region’s advocates for STEM and software development outsourcing understand the positive impact that gender equality can bring to the sector, and are making a lot of great moves to progress down that path.

Snapshot of WIT in LatAm

While the region has lagged behind for some time, many individuals in Latin America are working to broaden their educational efforts, remove gender biases, and increase female participation in the technology industry.

Some of the region’s independent programs include Laboratoria, a successful initiative that has educated over 1,300 female graduates in web development and UX design in multiple LatAm countries. Another example is Mexico’s Women Leaders in STEAM, a mentoring program for young women designed to pave the way into careers in STEM, while also promoting cross-border collaboration with the United States. Regional events include Latinity, or the Latin American Women in Technology Conference, which brings together more than 400 female leaders from across the whole region to discuss gender issues in computing and technology.

In terms of research and development, the gender gap is much smaller in Latin America than the global average. UNESCO’s 2018 Women in Science report found that 45.7% of researchers and investigators in LatAm are female, while the worldwide workforce in this field is just 28.8%.

While these stats and initiatives show definite progress on an individual level, organizations are still struggling to admit responsibility for the role they play in inequality. According to Alison Wynn’s piece for the Harvard Business Review, companies around the world must address how their policies and culture are resulting in gender biases. She suggests that “implementing broader recruiting strategies, specific and measurable performance evaluation criteria, and transparent procedures for assigning compensation will go a long way toward reducing gender inequality in tech”.

While only 17% of ICT roles in Colombia are occupied by women, 61% of the country’s women are interested in being trained in ICT, according to a study by the Colombian ICT Ministry last year.

There are regular events to boost these figures around the country each year, such as ForoMet’s Women, Energy, and Technology conference in Medellin, which invites hundreds of Colombian entrepreneurs, businesswomen, and business managers to speak about the industry.

Here at Perficient Latin America, we participated in the CodeBreakers event in collaboration with international organizations. Along with 20 other locations worldwide, we provided 50 high school girls with the tools and space to build their own websites in Medellin, breaking the world record for the greatest number of girls coding in multiple locations around the world.

In our experience, WIT programs in Colombia see the most benefits when companies partner with organizations and communities that are already doing impactful work, with a special emphasis on the country’s under-served communities, as it allows them to expand their reach or enhance their programs into populations that may not normally get such opportunities.

PSL’s Women in Tech (WIT) program is driven by a community of professionals committed to creating an inclusive environment that fosters gender parity in tech. We want to create a world where women play a larger role in technology, positively impacting the world in profound and tangible ways.

WIT seeks to provide a space where women and other minority groups are supported, respected, and encouraged to excel within STEM careers. This initiative is about bringing everyone together to create innovative solutions to elevate underrepresented groups, regardless of gender or identification.

We hope to remove the biases that prevent qualified women from applying for jobs in technology. To support this approach, we would ideally like to include more women in all internship programs, diversify how we recruit senior-level candidates, and invite existing employees at Perficient Latin America to enhance the recruitment process in ways that will attract a diverse range of candidates. Be sure to check back for more updates on how the program is progressing and what we have learned very soon. As with all of our programs, it´s a work in progress and constantly evolving.

In Latin America, companies will continue to make efforts to empower women in tech to succeed in the world of technology while breaking the mold in ways that will ultimately benefit the entire industry.

Want to learn more about diversity in tech? Ready to get involved? We’d love to hear from you.