Why YouTube and Google Rank Videos Differently – Here’s Why #140

YouTube is owned by Google. But when you do the same search on both, you often get entirely different rankings for videos. It’s almost like one is a Mac and one is a PC!
In this episode of our popular Here’s Why digital marketing video series, Eric Enge reveals the results of a study he did of just how different the search results are between YouTube and Google, and he gives some explanations of why they should be different.

Mark: Eric, is searching for videos on YouTube and Google really all that different? I mean Google owns YouTube, right?
Eric: Yes, they do. But even searching for the exact same query on YouTube and Google often yields very different results.
Mark: Really?
Eric: Yes. We recently did a study where we looked at the results for over 400 queries that show video results in both YouTube and Google. We found that in most cases the rankings of videos were quite different between the two platforms.
Mark: Can you give us an example?
Eric: Sure! We entered “12 Angry Men” the title of a classic movie, into both Google and YouTube, and you see the results below. Google showed a video from this query at positions nine, fourteen and fifteen. Now, since YouTube shows only video results, of course, you might expect that those would be the first three results, i.e. one, two and three on YouTube and in the exact same order, but they weren’t. As you can see, they actually came in at five, three and one, in that order, but on Google, it was nine, fourteen and fifteen so it wasn’t even in the same order. In fact the reverse order. 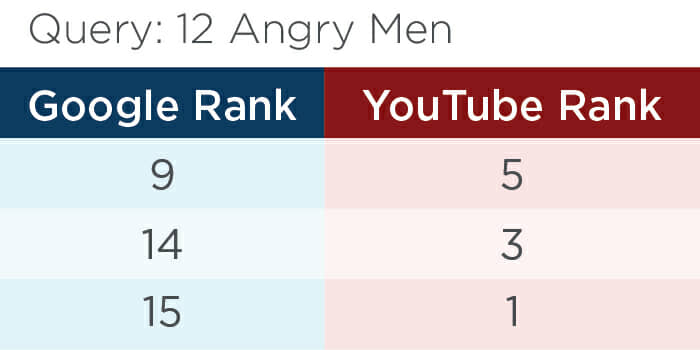 Mark: Exactly, the reverse of the ranking.
Eric: We saw a great many similar results where the rankings of YouTube varied significantly from how the same videos were ranked on Google for the exact same search query.
Mark: Exactly how much do they differ in our study results?
Eric: As you see in this chart below, about 65% of the time the queries for Google showed multiple videos, the number one video was not the same on the two platforms, and that held true for just over 55% of all the queries we looked at whether Google returned multiple videos or not. In fact for about 57% of the queries in our test set the order of ranking was different between Google and YouTube, and the more videos there are in the Google result the more likely it is that the order of ranking differs from YouTube.

Mark: That brings us to the question, why? Why do YouTube and Google rank videos so differently?
Eric: I think it’s primarily caused by two things. Difference in user intent and the monetization strategies for the two sites.
Mark: How does user intent vary between Google and YouTube?
Eric: Google’s goal is to deliver a result that causes you to get what you were looking for on a page-view basis. Everything is transactional and short term in nature.
Mark: By page-view basis I take it you mean that Google is comparing videos it might show in response to a query against every other kind of result it could show on that page of results?
Eric: Exactly, and by transactional I mean that the typical Google searcher is looking for the one best answer for whatever they’re searching for, and they’re done. In contrast, a typical YouTube visitor is going to be there for a while. He or she is there specifically to see videos and this is, they’re very often actually willing to watch more than one.
Mark: Now you also mentioned the monetization strategy of the two platforms.
Eric: And that follows from the difference of user intent.
Mark: How so?
Eric: Both platforms are monetized by the ads that show on them. They both know that the more they satisfy what the user comes there for, the more time the user will spend on them being exposed to more ads and therefore creating chances to make more money.
Mark: So for Google, that means showing ads that are most likely to satisfy the user’s immediate need, whereas on YouTube it’s more about keeping the viewer on the platform, right, moving from video to video, with ads they might try to fit into that flow.
Eric: That’s it in a nutshell.
Mark: Now, Eric goes into a lot more detail about the results we got in our study and the reasons behind the different search algorithms on Google and YouTube in his blog post about our study. You can view the study here.