Lots of fun at the NishTech Event last night then back to the hotel bar for drinks and interesting conversations on Helix, Habitat and Ignition.   At the bar, Mike Reynolds asks what I wanted and @Sitecorey and I said Chocolate Milk. Mike rolled his eyes, this is a bar they don’t server that.  I said okay I will have what you are having. He smiles.  I turn around and there is Rick Bauer (@sitecoredial) with my handcrafted chocolate milk.  Mike returns with the other drink shocked that I got a chocolate milk and that it looks so delicious. 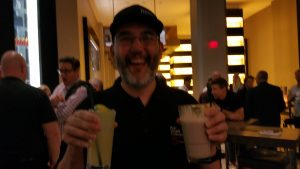 At the end of the evening everyone started to say, “Ignite” before heading to bed.  On twitter @SitecoreBetty and debated with some on Habitat vs Helix insisting that Habitat is NOT for production but Helix is.  The best line went something like this “Why sift through a haystack to remove the junk when you can start with clean bushels”
It is now the second day of Sitecore Symposium. Did my workout of 30 minutes of Elliptical Bike, now on to breakfast then the keynote.  It is going to be an exciting day of sessions.  I will keep you posted as the day progresses.
The morning breakfast was cut short because everyone had to be in the keynote room by 8:00 am. It started with a really funny comedian. 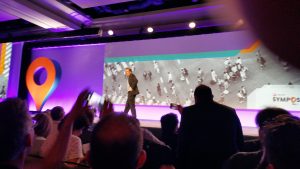 Followed by an amazing experience with a live mardi gras band elevating the energy in the room. 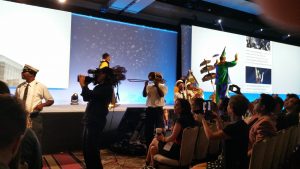 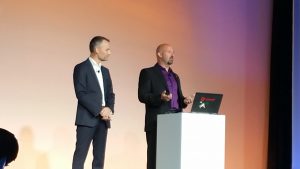 A walk through the Sitecore Experience Accelerator also cleared up how it works at a high level. 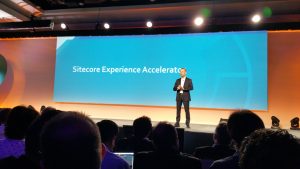 Jason Silva was inspiring.  The next billionaire is someone who can touch a billion people in a positive way. 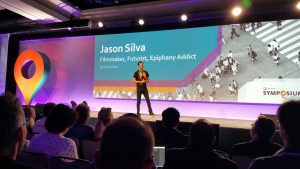 Sesame Street news 🙂 Well not exactly, I found myself in an adhoc interview in front of the Perficient booth. 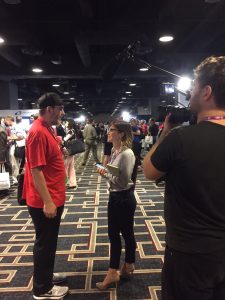 When I saw this I thought of Mike Reynolds at SUGCON this led to a cool video on YouTube. A lot of people asked for it so here is the link to the video. 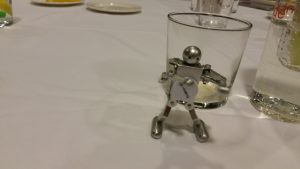 There is that famous picture where Henderson, Orr, Howe, etc are all lined up about to go on the ice. That day in 1971 Canada beat the Russians.
It was cool to see the Perficient powerhouse up on the big screen in this pose ready to take on the world by storm. 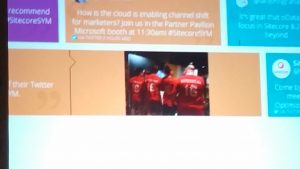 Sitecore Commerce has some amazing things as part of the 8.2 release. There is a lot to come too.  We all wait in awe of it all.  At the same time Sitecore and Azure was presented, be sure to ask Tim about this. 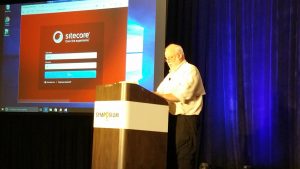 This picture is pretty exciting actually, it shows two potential MVPs in action. Later at the House of Blues we saw how much of a celebrity Corey was.  A couple times in the evening we ran in to a few people and their first words were “You are Sitecorey, someone at my company really wants to meet you” we walk over and it is one of the legends that want to meet him, shake his hand and take pics of him.  My tagline is everyone knows a chris williams well I think it now should be everyone knows a Chris Williams and a Corey Smith.  House of blues was amazing. 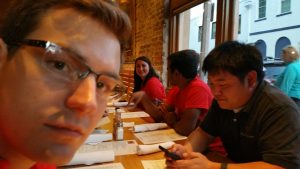 The food at Coucon was amazing 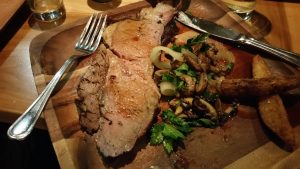 Oh this pic is for Jason Wilkerson, it is titled “Any port in a storm”  This was awesome port.  Many in attendance said “This makes me envision a large maple leaf. I feel like I am in Canada where the people are warm and welcoming.”  At the House of Blues, the Canadians were there in force to welcome everyone, from Coveo staff to Howard Kim (who used to work out of the Toronto Office.  Love Howard) to the Canadian Partners, all the Honorary Canadians on the Australian and New Zealand teams in fact almost everyone at the House of Blues felt Canadian tonight as they played Arcade Fire in the main area. 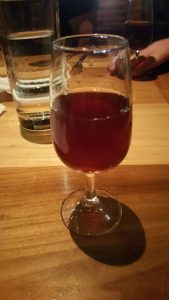 It was late in the evening and some people were going to the after after after after after party on Bourbon Street but a few of us walked back to the Hotel together and met up with the Coveo team for a good chat at the downstairs bar. An amazing day. Looking forward to tomorrow.

1 of 1 Sitecore Commerce MVPs in Canada.