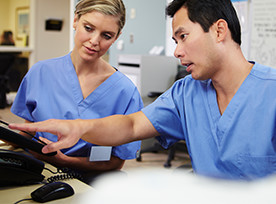 Why do we need HL7 or a Singular Data Format across Multiple Systems?

Different systems over the years have adopted and implemented these interfaces in their preferred programming language and created HL7 engines with easy connectors. Here in this document we are going to discuss how this is done in JBoss Fuse using Apache Camel a routing or mediation engine.

What is Apache Camel?

Multiple systems across healthcare providers and other entities rely on communicating using HL7 data and over the time JCAPS has been a leading vendor in the field.

HL7ForwardMSG Inbound: Inbound Forward Message mode is use with the Outbound Delayed ACK. Its purpose is to get a message from an outbound Forwarder and return and acknowledgement.

HL7Forward Outbound: Outbound Forward Message is use with the Delayed ACK. Its purpose is to get a message from a JMS queue and send it to an external system. No validation is performed.

HL7OutboundDelayedAck: Delayed Acknowledgement is similar to HL7Outbound, but the initial acknowledgement is received from the receiving system. After the Sender receives the first ACK, it waits for a second ACK that indicates that the message was received by the external HL7 system.

As Oracle has announced discontinuation of JCAPS with support being completely stopped by April 2016, companies are looking for alternative options to save their investments.

This article outlines one of these alternatives using JBoss Fuse and Apache Camel’s abilities and in-built libraries, a real-time implementation along with source code.We’ll also cover how the product compares to other similar products on the market and financial aspects like cost of development and cost of ownership.

The message is consumed from the inbound queue and mapped to person demographics and sent out again as HL7 message completing the routes.

The core project serves as the parent to the inbound, Xlate, and outbound modules. Configuring parent POM dependencies is as below:

Make sure parent POM i.e. core-pom.xml packaging is set to POM as shown below:

Configure the properties section to get default versions of JBoss Fuse BOM and other core dependencies as below: 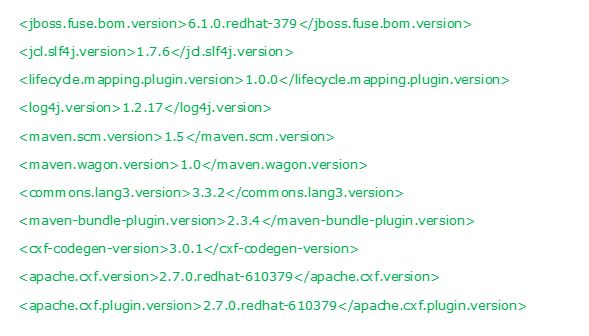 Configuring POM for the child projects:

The child projects should be configured to generate a bundle as a packaging format using the Maven bundle plugin. See below for the configuration: 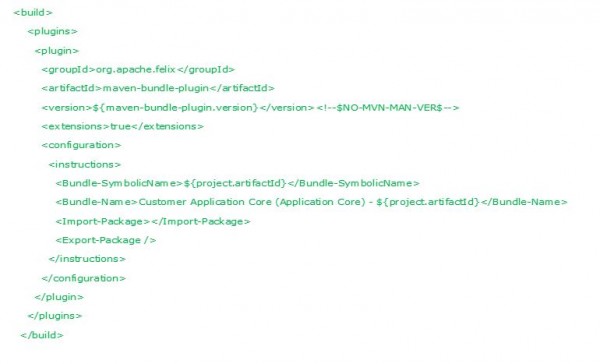 Deep dive into the code

On the inbound side HL7FormatterRouterBuilder is the primary route builder class registered in the Camel context using the blueprint.xml. A sample HL7 string is sent as a message using a timer endpoint.

The HL7 string message is added as body to this route using a new processor.

The timer sends the message every 5 seconds. This message is sent to the hl7input endpoint. To parse a HL7 message, the HAPI provides a validator to validate the HL7 message using various criteria. The validated message can be parsed using various parsers that come inbuilt with HAPI engine. Here in this example we are going to use a generic parser and an XML parser. The first one to convert data to HL7 Object and the later prints out an XML form of the HL7 message.

Extend the HAPI’s ValidationRuleBuilder to create a custom rules builder for validating HL7 depending on the requirement.

The HL7FormatterRouteBuilder.java class converts the incoming string and unmarshalls it to HL7 object which is sent to the outbound queue activemq:queue:HL7InboundQueue for further mapping the HL7 to Person Object.

To do so, create a new HAPI Context that can configured with rule builder and parser to parse the HL7 String data as below:

Once the parser configuration is registered the data can be parsed in the camel route as follows:

The HL7ParserProcessor implements Apache Camel Processor interface. This processor is configured to read the HL7 object and print out XML as a String to the log console.

The outbound has one route builder XlateRouteBuilder that reads the HL7 String input and parses it back to HL7 Object. The data in the HL7 Object is mapped to Person Demographics using a type converter. The type converter generates person object from the HL7 object.

Once the type conversion is completed the data is marshaled into HL7 data object and sent out to an outbound queue for consumption by other services.

Running the use case

The use case can be run as local Camel context as shown below or can be run in a fuse environment by installing the modules as bundle using the Maven URL handler command. If you’re running it as a local Camel context for testing or other purposes, make sure an instance of ActiveMQ is up and running on your local system. 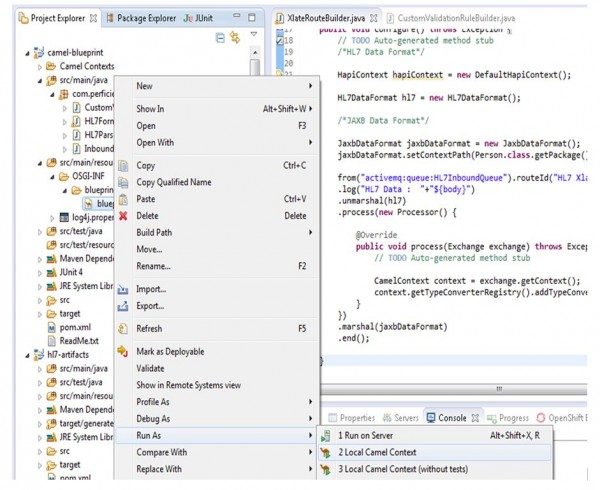 Sample XML converted HL7 message is as below:

Apache Camel is a mature routing engine to handle HL7 data with a vibrant community to support the product. It offers high levels of flexibility in transferring data between different data formats and proves itself as worthy replacement for JCAPS, a leader in dealing with HL7 data. Apache Camel and JBoss Fuse are also worthy competitors in terms of cost.

How does Apache Camel and JBoss Fuse fit in the big picture of an enterprise?

Also check out John Hart’s post on Solving and Transformation of Routing with EDI Claims for more ways to leverage Fuse and Camel.