The consolidation process in FCCS includes elimination of intercompany balances, which will occur when intercompany entities meet at the first common parent within the Entity hierarchy.

As a result, UK31 is automatically created as a member of the Intercompany Dimension as follows:

If there is an imbalance during the elimination process, both intercompany balances will be eliminated and the difference will be in the Plug Account. For example, Entity E1 sold 2 shipments to Entity E2. E1 has recorded both intercompany receivables but since E2 has not received the second shipment, it has not recorded the corresponding intercompany payable.

The Attribute Values for Intercompany Accounts must include IC_Acc_Yes. In addition, the appropriate Plug Account must be assigned as shown below:

Consider the sample Entity Hierarchy below. 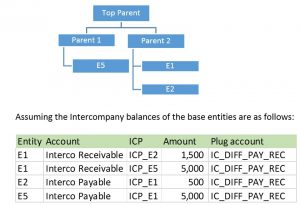 Elimination is achieved by systematically populating the intersection of FCCS_Intercompany Eliminations member of the Data Source Dimension and FCCS_Elimination member of the Consolidation Dimension with the reversed sign of the amount to be eliminated. 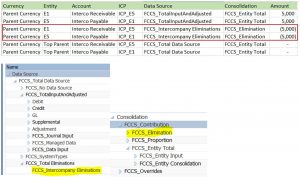 I have a bachelor's degree in Accounting, MBA, and CPA. I have 6 years experience in HFM/FDMEE involving manufacturing, service, and marketing industries.