Can Pages Rank on Google Without Links? – Eric Enge with Gary Illyes at Pubcon 2017

At Pubcon 2017 in Las Vegas, Perficient Digital’s Eric Enge sat down with Google Webmaster Trends Analyst Gary Illyes for an in-depth keynote conversation about recent developments in search and SEO.
In this, the second of four video excerpts from that conversation we’ll be publishing, Eric asks Gary about the importance of links for ranking, but also why some pages are able to rank well with few or no links. A transcript and links to the other videos in this series are below the video.

Other videos in this series:

Eric: A few times lately you’ve talked about search results where links really aren’t involved in the ranking. One example of that would be a long tail query. One reason why links might not be involved in ranking there is long tail queries may be bringing up pages where everyone competing for that spot probably isn’t going to have much in the way of links, right? So, are there other scenarios where links aren’t very involved?
Gary: So, there was this guy from Norway who found quite a few head terms as well where the results didn’t have links at all, not even internal links somehow, and they were ranking well.
I think one query, on Norwegian Google, was “Porsche 911,” and either the first or the second result was a Porsche page, and it had, according to Majestic at that point, no links whatsoever. That just proves my point that, in certain cases, links can be ignored pretty much.
If you are targeting long tail, and it looks like more and more people are targeting long tail queries, then links definitely are not or should not be a high priority for you. If you have links then perhaps you secure your future a little bit more. But otherwise, we can just try and find pages without links.
[Tweet “If you are targeting long tail KWs it’s possible to rank without links. Find out more at”]

When Links DO Matter for Ranking

Eric: Sure. But there are scenarios where links do matter.
Gary: Of course. I mean, if you search for Apple, for example, links will matter. Most of the head queries I would imagine have links. But even there, if there are search features that are above the number one position, you could figure out how to get the spot in one of those features. And then, suddenly, you are in position zero versus…
Eric: I’m fond of telling people that if you’re in position five currently, it’s easier to get to position zero than position one.

See Featured Snippets: How to Earn Position Zero in Search 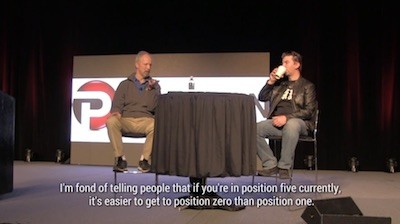 Eric: Because it’s a very different sort of system.
Gary: And I say “probably” because I haven’t tried.
Eric: Well, you could try some SEO hacks on your own site that you have.
Gary: I would love to get some stupid penalty.
Eric: Well, I’m sure you would have a lot of volunteers here to help you.
Gary: I’ve been manual action free for the past nine years.
Eric: Excellent.
Gary: So, I like to keep it that way.
Eric: So, links still matter in some scenarios, but there’s plenty of others where the bidding system is all about the quality of the content and other kinds of signals.
That was a summary statement, and you were supposed to say, “Well, no, that’s not what I meant,” or, “Yes.”
Gary: I’m thinking about what you said. It’s just early morning, it’s really early, and I’m still thinking. I was thinking for so long that I just lost it.
Eric: There are queries where the bidding system is just relying on other types of signals other than links to rank.
Gary: I think for most features, you do actually have to rank reasonably well to get into them. So, for example, if you take featured snippets, I think we will take the featured snippet only from the first page and possibly the second. I don’t know if that’s still true, but it definitely was true at one point.
Eric: That’s what we’ve seen.
Gary: And for stuff like Top Stories, other signals matter more, but you still have to rank somewhere in the first, I would say dozen, couple dozen, maybe.
Eric: Right. So, with Top Stories, for example, it seems like there’s a strong emphasis on recency.
Gary: Recency and popularity on the internet. So, for example, if we see that a story is getting traction on Reddit, basically more and more people start linking to it suddenly, then we will consider that as a very good signal that that’s something important, and of course, we have protection against hijacks. But, in that case, we don’t actually take the link’s value, we would take the count [of links], for example, or normalize the count in some way.
[Tweet “A hot story that is popular on the web can cause Google to rank it with no links involved. More at”]

Thoughts on “Can Pages Rank on Google Without Links? – Eric Enge with Gary Illyes at Pubcon 2017”