Introduction :  This blog describes the steps to set Value Prompts in Cognos Report Studio with default value selections that are dynamically rendered.  A sample Problem statement taken up in this blog illustrates the idea which can then be extrapolated to other such similar scenarios.

Problem Statement  :  The prompt page of a report should  contain a Value prompt for ‘Year’ ; the Default selections for which should be the current Year . For example : If the report is executed on  5-Feb-2017  , the year prompt should display all possible years in the DB with default value being 2017.

Solution : One possible solution to the above problem statement ( the steps for which are detailed in this blog ) is to have a Prompt Query for the Year prompt with 2 data items – one that displays the year as it is and the other that sets a static value for the current year alone ( and rest values as it is) . This Query can be used by a value prompt .The display value for the prompt can be set to the former data item and Use value to the latter data item. Following this , the Default Selection property can be set to the aforementioned static value. Now the prompt page would display the year prompt with the respective current value.

In the backend query for the report , Detail filters have to be applied such that the result set is filtered for the corresponding ‘ Use value ‘ selections ( Keeping in mind the Static value assigned to current year ) in order to get the desired result.

Value prompt with properties as shown below 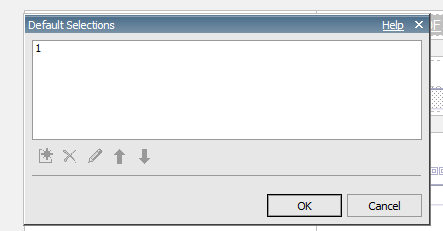 Detail filter expression for Query of the expected list

The Detail filter should be implemented as shown in the image. 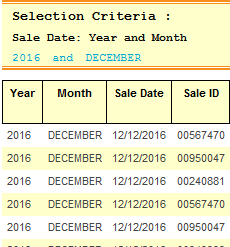 Limitation : The above solution has a limitation that it doesn’t apply for Multi – select scenarios . This is because a case statement cannot be applied in the detail filter for a situation when the user selects 2 years say the current year 2017 ( static value 1) and another year  say 2016.