API testing is a black box test, which is used to determine whether APIs return the correct response in the expected format for a broad range of feasible requests, as well as react properly to edge cases such as failures and unexpected/extreme inputs.

The quality of the test is often evaluated by code coverage. In terms of API testing, we are concerned not only about the success or failure of one test case, but also about describing the degree to which the source code is executed and the success or failure of all test suites on a global perspective. It needs to combine the code with the requirement, so that we can use the coverage in digital indicators to measure the quality of the tests.

It is a JavaScript-based project, and the main technology used in the project consists of MongoDB, Express, Angular2JS and Node.js. The test framework uses the Behavior-Driven development(BDD) model.

Disconnection between requirements and development can be solved. It starts from the needs of users, and ensures that the implementation of the program is consistent with the user’s needs.

Jasmine is a popular and easy-to-use BDD framework for testing JavaScript code, and it is recommended by the Angular2 official document. The Node.js module makes this framework available in node.js. These features make it very suitable for our project.

As we mentioned above, code coverage of the API test is an important indicator for test quality. One of the most suitable tools to get JavaScript-based code coverage of API testing is Istanbul. With Istanbul, we have a holistic view of specs’ coverage.

As a matter of fact, we originally intended to use the frisby.js framework for API testing, but this framework is developed by the individual, and has not been maintained for several years, so we changed the plan quickly.

At last, we choose Jasmine, Istanbul, and Super-test to work together for API testing.

3.API Testing Framework in Our Project

The project is deployed on the Docker and continuous integration is implemented with Gitlab CI. The API testing framework we developed is as below. 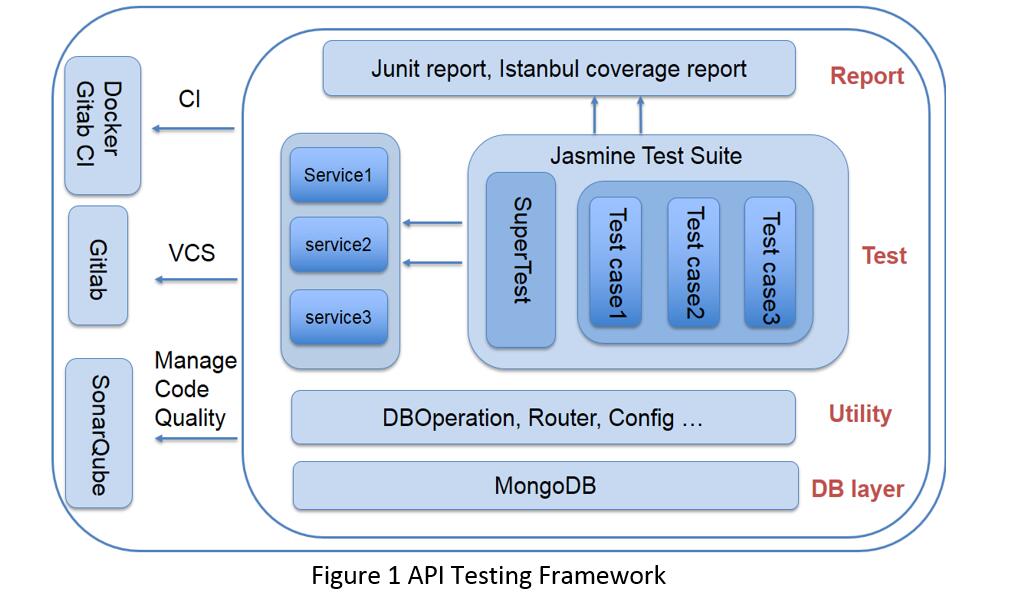 The utility is the core of implementing requirements, which can be divided into two parts: client and server. The server part contains a main file, a configuration file, API router files, prepared data, API functions and MongoDB functions and so on.

There is a file called package.json in the root directory of the project. It defines the dependencies that need to be installed. Input ‘npm install’ command in the terminal, then you can install all modules involved in package.json under the node_modules folder in this directory, rather than install the package manually one by one.

After executing test cases, it generates a Junit report under the test results path, which is displayed in an xml format. The Junit report can be parsed to an HTML report easily with popular CI tools, like Jenkins, Hudson and so on. As the picture shows, it clearly records every test case in every test suite running result

After executing test cases, we want to see a general report as the result to indicate how to improve testing quality. In the root directory of the project, a folder called ‘coverage’ will be automatically created, which is used to store the Istanbul code coverage report.