Update: Our 2018 update to this study has been published! Find out how mobile voice usage habits and attitudes have changed since last year.

As seen on Mashable

Do you talk to your mobile device in public? Would you do it on the street, but not in a restroom? Why? We wanted to know, so we surveyed 914 users to learn how they interact with devices today, with many questions focusing on how they use voice commands with their smartphones. Without further ado, let’s dig in!

Impact of Social Situations on Willingness to Use Voice Commands

We included in the survey a block of 10 questions focused on understanding how perceived social pressure impacts people’s willingness to use voice commands with their smartphones. Here is a summary of the data across all respondents:

As seen on ZDNet

[Tweet “Men are more comfortable than women using voice commands on a phone in public. More facts at”]
Here is a second way to look at the data as the ratio of male likelihood (summing up very likely and likely responses) over female likely/very likely responses: 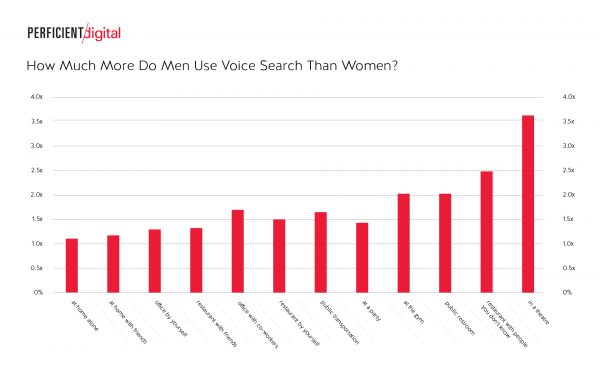 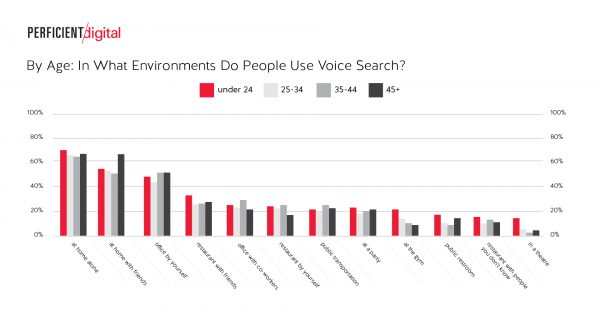 In most venues, there doesn’t appear to be much difference, but when you get to more public areas, such as at a restaurant with friends, at the gym, in a public restroom, or in a theater, there is a definite tendency for those under 24 to use voice commands quite a bit more than the other age groups (51.6% vs. 38.6% for all respondents).
[Tweet “People under 24 are 33% more likely to use smartphone voice commands in public than older people.”]
In sharp contrast to that is the income data: 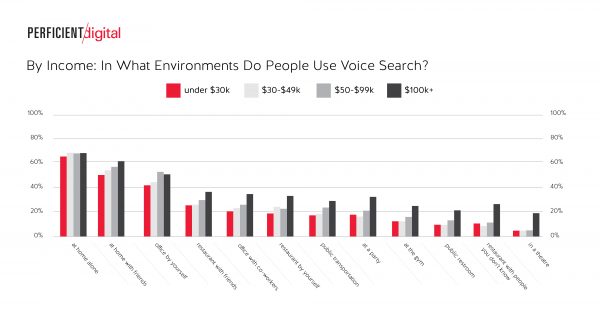 The willingness of those with an income over $100K to use voice commands with their devices in public places, as compared to other income categories is startling!
[Tweet “High-income smartphone users are more than 2x as likely to use voice commands in public. More at”]
We also looked at the impact of relationship status, or the operating system of the phone, but there was no particularly noticeable impact in either of those areas.

Ways People Use Their Smartphones

We asked users the top three ways they use their smartphone to look up information. I found it a bit surprising that 85.6% of them still start with their browser, and 74.2% go to a search app. As for voice search, that came in third at 57.8%. And only 24.3% use SMS text or a messaging app to get the information they need. 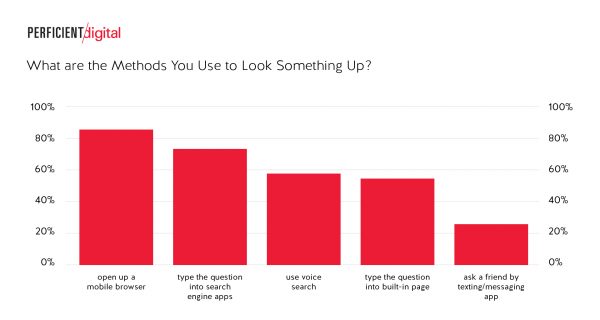 [Tweet “More than 80% of smartphone users still open a browser to find information. More at”]
However, women are far more likely to use texts to get their answers than men, by a 28% to 19% margin. This skews even more when you look at people under 24, where 40.3% of women use texts to get answers to questions, and only 19% of men that age will. Not surprisingly, we also see that people under 24 are more likely to use voice commands to play music than other groups as well. Single males also skew high for using voice commands to play music at 54% vs. 38.6% for all participants.
41.8% of people are annoyed by voice use by others in public (they marked agree or strongly agree) vs. 27.9% who disagree or strongly disagree. 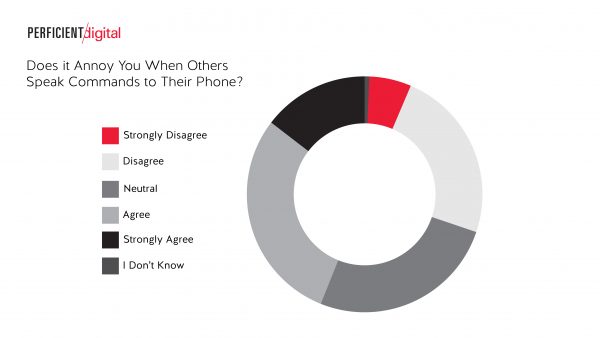 [Tweet “Over 40% reported being annoyed by others using smartphone voice commands in public. More at”]
Those with high income are more likely to get annoyed by people using voice commands with their phone in public (50.8% vs. 41.8% for all responses), but in stark contrast, they’re also far more likely to do it (42.5% vs. 26.9% for all responses).
The following chart shows the most common applications used by people when speaking to their phone: 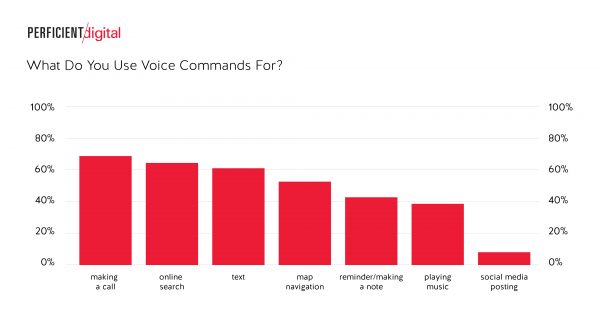 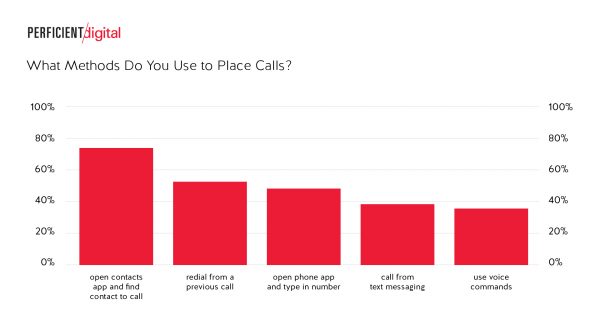 [Tweet “Using a voice command is still the least-used method of placing a smartphone call. More at”]
We asked the participants about their preferences for how they talk on the phone (survey takers picked their top three methods), and we were surprised to see that placing the phone against their ear still scored 85.8%, with married men doing so 93% of the time. It was also interesting to see that men were far more likely to use wired headphones (45.7%) than women (29.3%). Men under 30 are the least likely to use a speakerphone, at 37%, in contrast to those 45 and older (both genders) that do so (57%). 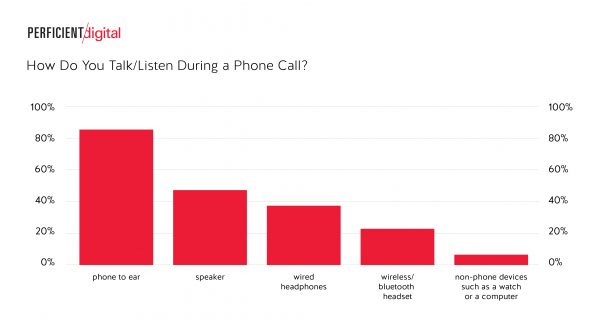 70.6% of people said the reason they like to use voice with their personal assistant (Siri, Google Assistant, Cortana) is because “it’s fast.” 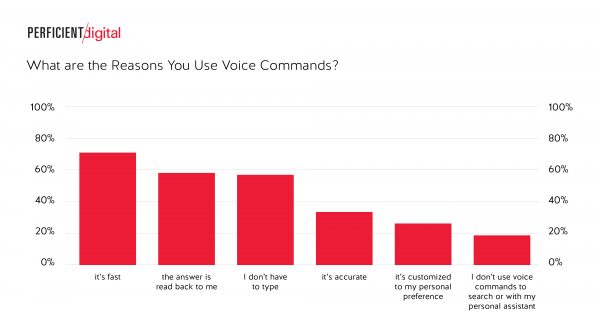 However, 70% of those 45 and older said it was because “I don’t have to type”, vs. 56.8% of all participants.
[Tweet “Speed is the #1 reason people use voice commands on their smartphones. Find out more at”]
Most people (61.3%) want their personal assistant to answer their questions more directly, as opposed to bringing up search results (you can read more about how Google is investing heavily in Featured Snippets here). Men were noticeably more interested in being able to customize the voice that responds to them from their phone by a margin of 48.7% to 35.6%. 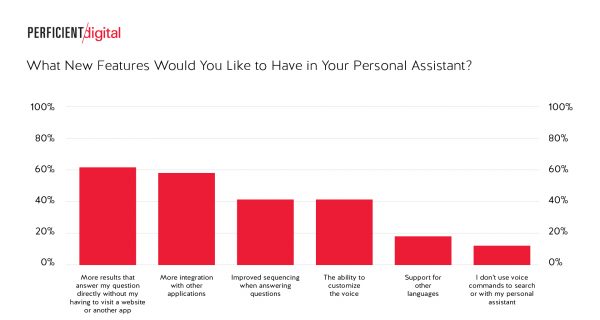 [Tweet “Smartphone users want voice command to give more direct answers and integrate more with apps. More at”]
In addition, iPhone users were much more likely to want their device to provide more direct answers to their questions (65.6% or responses) vs. Android phone users (50.6%). This makes sense, since Google does a more comprehensive job of returning such answers.
51% of participants believe that their personal assistant understands them well or very well. Only 14% thought they did so poorly or very poorly. 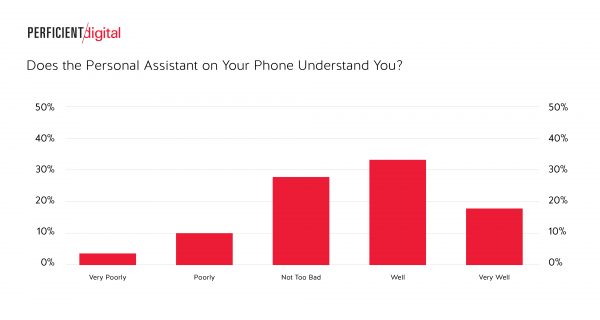 [Tweet “Almost half of smartphone users say their phone understands voice commands ‘well’ or ‘very well'”]
80.1% of people still prefer to type their texts in by hand, and only 14.9% prefer to use voice. 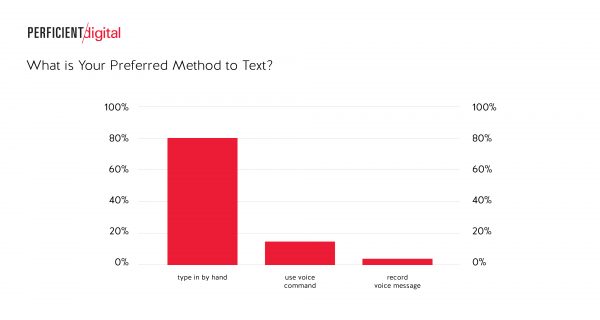 [Tweet “80% of smartphone users still prefer to type a text over dictating it by voice. More at”]
Two-thirds of people use voice with devices other than their phone, laptop, or tablet only rarely or very rarely. Not surprisingly, men lead here by a large margin at 20% as compared to women at 6.9%, probably because of gaming devices. 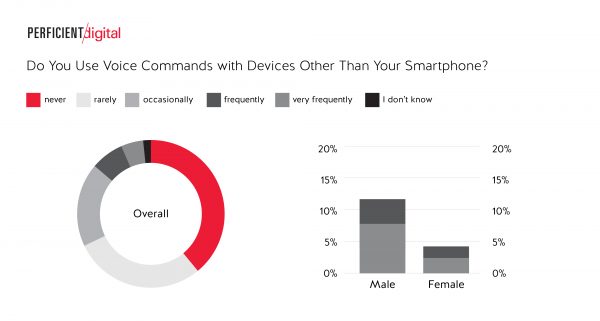 When asked if there is a hands-free driving law in their state, 35.4% of our respondents said they don’t know. 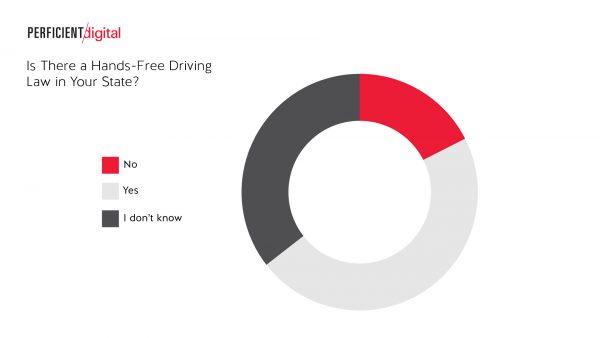 [Tweet “35% don’t know if their state has a hands-free-only texting law. More at”]
Nearly two-thirds of people would be more likely to access their phone using voice commands while driving. This trait skews female with 72.6% of women doing so, and only 55% of men. Note that this question compares the probability of using voice when compared to other situations, and does not necessarily relate to how often they use it (see the next question). 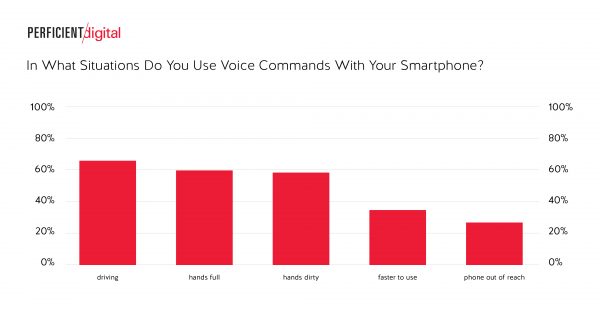 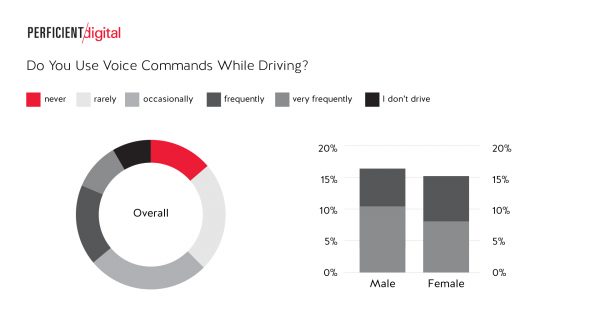 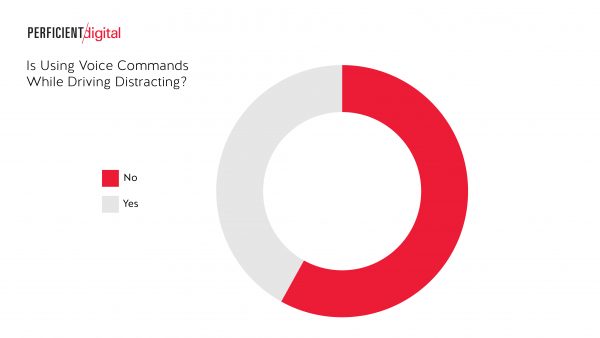 Most people (52.1%) would like to use voice to unlock their phone. 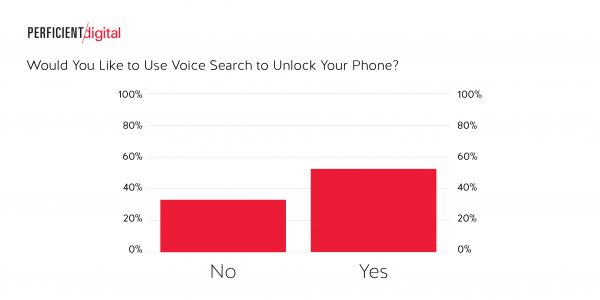 Approximately two-thirds of people are comfortable using the home button on their phone to access Siri or Google Assistant. 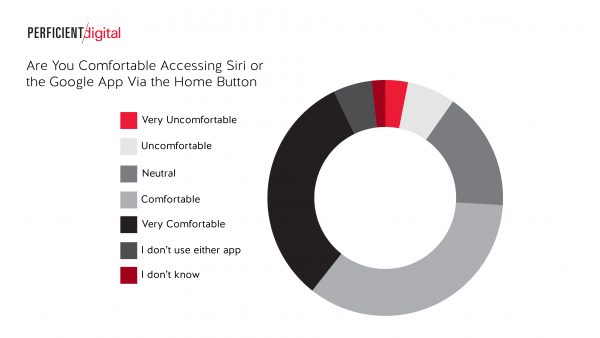 However, this skews in favor of iPhone users by a 70.5% to 54.9% margin over Android users.
Nearly the same percentage of people (63.7%) are comfortable using “Hey Siri” or “OK Google” as well. 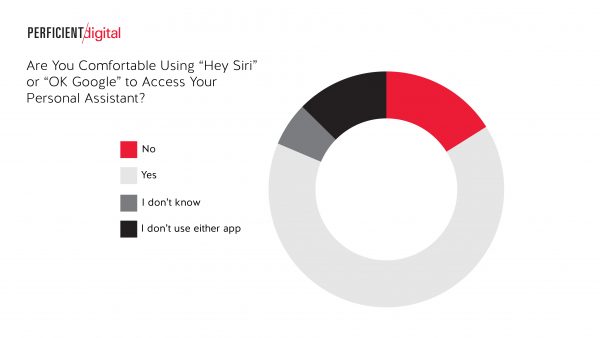 Of the 16.5% that said they weren’t comfortable using “Hey Siri” or “OK Google,” 51% said it was because they found it “annoying”. 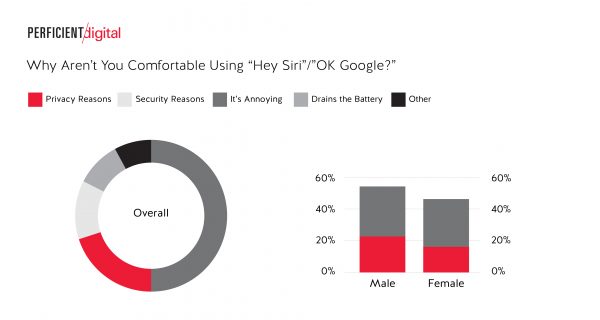 [Tweet “50% of smartphone users won’t use ‘OK Google’ or ‘Hey Siri’ because they think it’s annoying.”]
Most people agree or strongly agree that voice commands make their smartphone easier to use, with men coming in at 63.8% and women at 56%. 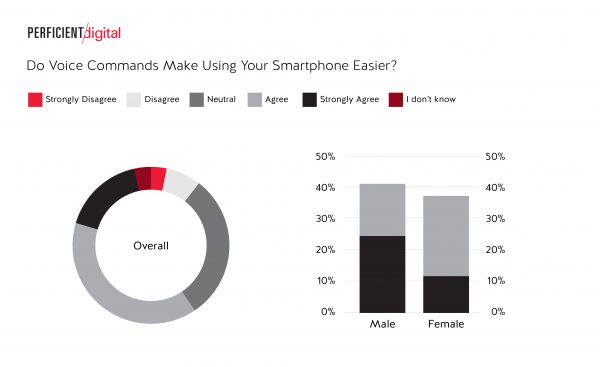 The use of voice command is growing. As you saw in several categories, willingness to use them skews more toward those who are younger, and I expect that people will get more comfortable over time with it, particularly as capabilities and convenience continue to grow. We’re planning to update this study from time to time to see how things progress.
Some additional resources related to Voice usage can be found here: