Virtual Reality (VR) is an immersive media experience replicating either a real or imagined environment and allowing users to interact with the environment. Unlike the conventional user interface of displaying content on a screen, VR immerses a person to interact in a digital 3D environment.

Virtual Reality is getting its share across every industry. Below are few key areas where VR is being used:

And it does not stop here, the use cases expand to various other industries such as Defense & Military Services, Gaming & Entertainment, Education, Recruitment and much more. 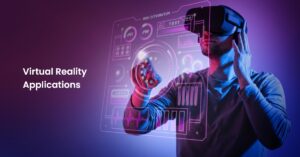 It is very important to define the scope of testing at the start and so the team is well prepared for what is to be expected. Quality engineers should organize brainstorming sessions to sit down and review the requirements in scope of testing and their complexities.

Consider the various functional and non-functional characteristics of the application to be developed and define a test strategy. This strategy should act as a general guideline for the QA engineers.

Business Analysts and Quality Engineers should work closely to evaluate the requirements. Non-functional requirements related to software performance, accessibility, and the user experience should also be documented to avoid ambiguities during the implementation phase.

Shift left testing approach does not stop just in conventional testing, it is highly important for Quality Engineers to review UI/UX and provide early feedback of the application to prevent design flaws. If the test application can run on a desktop or laptop in 2D mode, schedule your testing early with the 2D mode. This will help reduce fatigue for testers who must operate the equipment in 3D mode.

One of the critical points for testing a VR application is that you must have a physical environment to test in. Invest in testing equipment that can help validate functional and non-functional behavior. Devices that will possibly be used by end users should be considered while shortlisting the devices. Careful selection of test devices helps to ensure the application is tested at its intended way.

3) Collaborate with the Developers

Work closely with the developers to ensure adequate coverage in unit testing. Application development platforms, provide capabilities for automating unit tests and even measuring the coverage. It is important to have high unit test coverage that will help identify issues at the initial development phase and save the cost of getting a bug introduced in subsequent systems.

Functional Testing – Plan for Functional Testing based on business requirements. All the functionality of your VR software’s core functions should be tested to ensure consistent performance of all aspects of the application’s features. Think of all actions which a user would perform in a real device and ensure all possible edge case scenarios are covered in testing.

Localization Testing – Localization Testing should be done to ensure the content and specific functionalities developed for different countries are working fine in the VR application. Cultural elements like colors, symbols, etc. should provide a local user experience.

Usability Testing – Usability Testing is performed to check the level of ease in using the VR application.  This ensures the use cases are aligned with the preferences and needs of the target audience and the UI/UX exhibit user friendly behavior. Feedback on usability issues should be documented for further improvements. This helps to assess the level of user satisfaction on their interactions with the application.

Immersive Testing – An Immersive Test gauges how much a user is immersed in a virtual environment. The test findings often demonstrate how fully immersed participants are in the application and how strong these sensations are.

Accessibility Testing – With people across the globe trying to access the VR application, for performing different tasks, it is important that the large segment of our society containing more than a billion people with certain disabilities (visual & hearing impairment, cognitive disability, motor impairments, etc.) can access the application the same way as any other person would. People with any disabilities such as hearing, or vision issues should be able to experience VR games with a very minimal discomfort.

Security Testing – The need to identify vulnerabilities, threats, and risks in the VR application and protecting it from malicious intruder attacks is necessary to avoid loss of data, revenue and, most importantly, reputation. All potential loopholes and weaknesses in the application should be unearthed during the testing.

Though there are no test automation tools/frameworks specifically designed to test all VR features, there are a few tools like AirtestIDE and Poco which can be leveraged to automate the VR tests and reduce some manual testing efforts.

Below are some of the tools that can be handy during testing:

To conclude, testing a VR application requires a comprehensive approach considering a wide range of factors. This approach ensures the QA Engineers deliver a high-quality and immersive user experience for VR applications.

Binesh John is a project manager at Perficient in Chennai, India. Binesh has over 10+ years of experience in software testing across different domains and platforms.