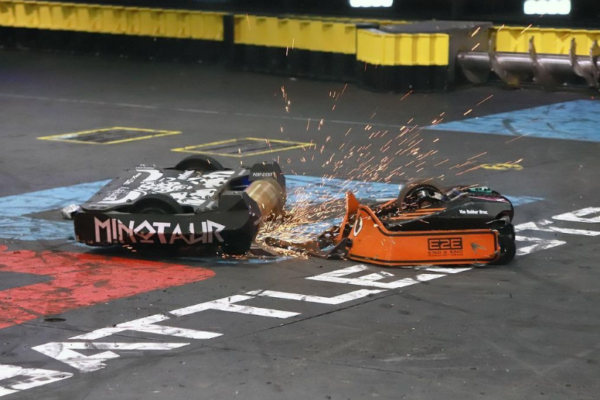 Minotaur is on a mission for redemption and revenge this season of BattleBots, which premiered on January 5. After an incredibly strong performance last season, the team fell short in their pursuit of The Giant Nut Trophy. Despite ending last season in defeat, the bull was raging when battling the reigning BattleBots champ, Tantrum, during the season premiere main event.

Perficient colleagues cheered on Team RioBotz and Minotaur in the lead up to the premiere. Colleagues at our global headquarters in St. Louis came together for a pre-show happy hour where members of the RioBotz engineering team, including founder Marco Meggioliaro, made special appearances to get attendees hyped for the new season. Colleagues matched the team’s hype with high energy and thunder sticks, setting the tone for the night to follow.

Minotaur’s grand return to the ring did not disappoint. Minotaur was relentless with its drum spinner and going shot-for-shot with the world champ. Minotaur had Tantrum spinning and on its head after back-to-back massive power blows. Only one minute 20 seconds into the fight, Minotaur won by KO!

This was a massive win for Minotaur and an incredible way to start the season. Minotaur broke their four-season streak of losing in the season opener. Knocking Tantrum off their undefeated throne gives Minotaur strong momentum for the rest of the season. 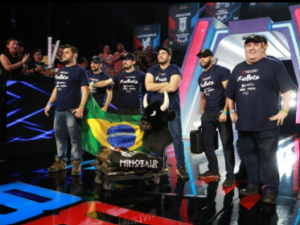 Our Perficient colleagues rushed to our Minotaur Fans Teams channel to celebrate the win together:

“Woot! Minotaur rules. Time to get that Minotaur neck tattoo. Everyone in for one? A Group buy!!!” – Art Quinn, general manager

“The RioBotz team did great! They clearly listened to all of the advice that I was shouting at the TV.” – Randy Roosekrans, senior project manager

Perficient’s global colleagues are united behind Minotaur and excited to witness the fierce competition unfold throughout the rest of the seventh season of BattleBots. Perficient is proud to be the primary sponsor of Minotaur.

Discovery shared part of Minotaur’s exciting match against Tantrum via a Twitter video:

Get ready for Minotaur’s next battle on Thursday, February 2, where they will take on Free Shipping. BattleBots airs on Discovery Channel and the Discovery+ streaming platform worldwide. We’ll be watching and cheering for RioBotz and Minotaur to continue their dominating streak!