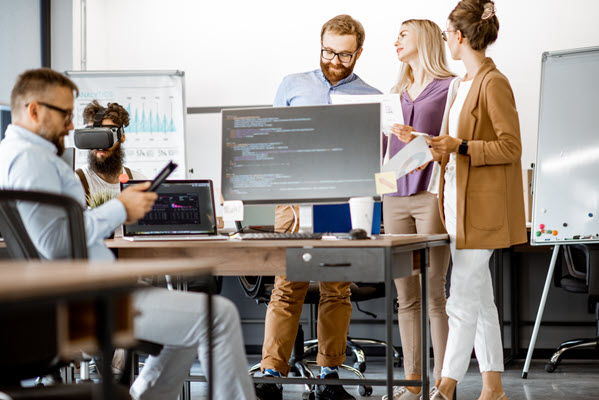 This blog describes how to use and interpret the information provided by the Power BI Performance Analyzer, finding the bottlenecks in slow reports.

What is the Power BI Performance Analyzer?

The Power BI Performance Analyzer is a feature included in the May 2019 release of Power BI Desktop that simplifies how you can collect the DAX queries generated by Power BI. You can use DAX Studio to capture them, but the Performance Analyzer integrated into Power BI is simpler and provides a few insights about the time consumed in other activities, such as the rendering time of any visuals.

You can find more details about the user interface in the Performance Analyzer documentation by Microsoft. This blog aims to focus on the metrics provided by this feature and help you interpret the data correctly.

For example, let’s begin with capturing the visuals’ timing.

Switch to a different  page in the report,

The Performance Analyzer pane captures the Duration time in milliseconds for each visual on the page. The Matrix visual is the slowest – though the timing may vary on different hardware – but every visual might show around 2 seconds of duration. 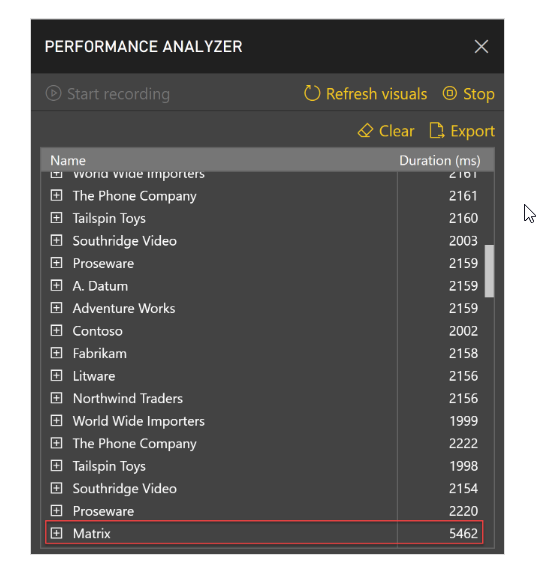 Click on the Refresh visuals button in the Performance Analyzer pane and scroll down to see the Duration of the visuals for the second execution. The Matrix is still the slower visual, but the execution time of every visual has been reduced since the first execution. 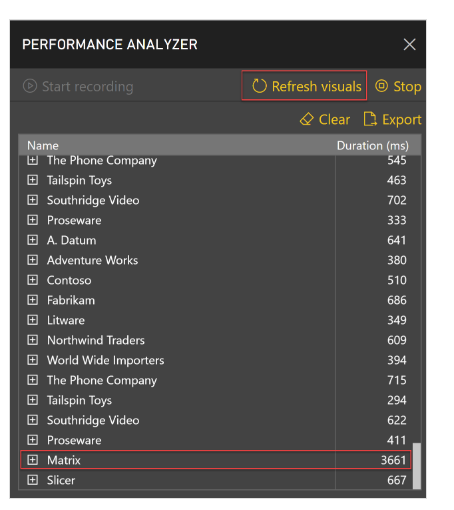 At this point, you have two executions of the same visuals in the Performance Analyzer pane. The first group is related to a Changed page event, and the duration is at least two seconds for almost any visual. By selecting one of these visuals, you see that most of the time is spent in the “Other” section.

The Duration of each visual is the time spent in three categories:

Suppose you compare the duration of the first execution of the Sales page with the second execution. In that case, you can see that the latter has a shorter duration because it reduces the Other duration of each visual. The reason is that the first execution of visuals and queries to the data model requires an allocation of new structures in memory; it cannot be reduced unless you reduce the number of visuals and the size of the data model tables. For this reason, you should focus mainly on the Duration timing generated when you click on Refresh visuals. This way, you ignore the initial loading time of both the report and data model.

Suppose the duration of the Visual display is large. In that case, you should consider whether you can improve it by reducing the amount of data included in the visual (e.g., reducing the number of data points in a map or a chart) or by replacing the visual with another. It is normal to see a longer duration for custom visuals compared to native visuals in Power BI. However, every visual has a memory and CPU cost. The presence of many visuals in a single Power BI page can affect the performance because the rendering of each visual is a sequential operation executed in a single thread. As you see in the following screenshot, even a simple Text box requires almost 100 milliseconds, so waiting several seconds just because a single page has tens of visuals is not uncommon.

A slow DAX Query has a large duration time and is worth further investigation. The reason can be a slow measure, a slow data model, or a slow data source – especially when using DirectQuery. For example, the following screenshot shows that the sample report’s slowest visual (Matrix) has a very slow DAX Query.

This is the code generated to populate the Matrix visual: 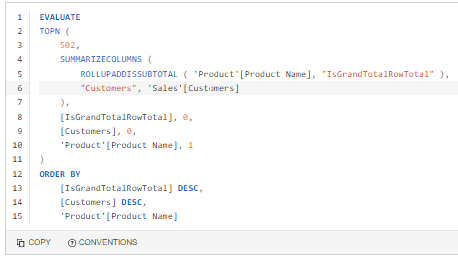 The query invokes the Customers measure, which is defined as follows:

The goal of this blog is not to explain in detail why this specific Customer measure is slow. We can simply mention that using a table filter combined with a DISTINCTCOUNT aggregation creates an inefficient query plan. Modifying the code using a semantically equivalent column filter produces an optimal query plan:

By refreshing the visual, it is possible to see the significant improvement made to the DAX Query, now running in under 10 milliseconds

However, the duration of Other has now increased because of the presence of multiple visuals, and Matrix is no longer the slower query on the report page.

Because of its nature, the Duration reported in Other should be ignored. Most of the Other time is not added between visuals. Because the total Duration of visual reports the sum of the three categories, this makes it harder to isolate the slowest running query. It would be a good idea to be able to isolate the Other duration, summing only the DAX Query and Visual display durations for each visual, thus making it faster to identify the main bottleneck in a report.

Happy Reading. Thank you all for your comments. This is my 11th Blog in 3 months. When writing my first blog, I never thought I would write 10+ blogs in a quarter. Hope this motivates people to come up with more blogs in the future. Thank you!

Arpit Malviya has worked at Perficient as a technical consultant. He has been working in the Power BI & Data Analysis field since 2019.