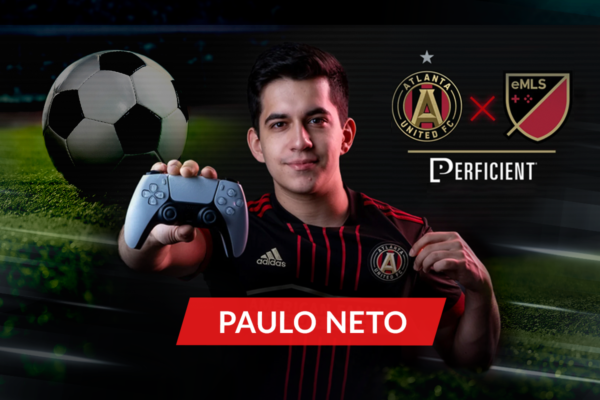 Congratulations are in order for Paulo Neto, Atlanta United’s eMLS player who finished in the top eight of the 2022 FIFAe World Cup, securing his spot as one of the best players in the world.

We are proud to be the club’s first eSports partner, serving as the presenting sponsor for the Atlanta United eMLS player, 19-year-old Brazilian-based Paulo Neto.

Paulo signed with Atlanta United in 2018. He reached the eMLS finals three times before winning the title of eMLS Cup Champion in March this year. His winning streak continued with a series of qualifying matches for the 2022 FIFAe World Cup.

This was Atlanta United and Paulo’s first time competing on the worldwide stage of the FIFAe World Cup. The team previously qualified to compete last year before the tournament was canceled due to COVID-19 restrictions.

This year the FIFAe World Cup was hosted in Copenhagen, Denmark from July 14-17. Paulo came out of the gate hungry to win, scoring the most goals of any player in the group stage and round of 16. With tremendous momentum, he entered the quarterfinals as the favorite to advance on to the semifinals.

Paulo played a competitive two-legged game in the quarterfinals. Although the first leg resulted in a 2-0 loss, Paulo made a quick come back at the start of the second leg and tied the aggregate score, 2-2. His competitor scored three more goals throughout the rest of the game, making the aggregate score 5-2. With the clock running down, Paulo made one last charge in the 65th minute of the match to score another goal. While his determination was impressive, it wasn’t enough to catch his opponent. The match ended in a 5-3 loss for Paulo and Atlanta United.

Paulo’s skilled performance in the FIFAe World Cup positions him among the eight best FIFA players in the world. With the competition broadcasted on platforms like YouTube and Twitch, Paulo demonstrated excellence and proved himself to be one of the greatest gamers to a worldwide audience.

Congratulations to Paulo and Atlanta United. We’re so proud of Paulo’s incredible performance, and we can’t wait to see him continue dominating the competition next season.