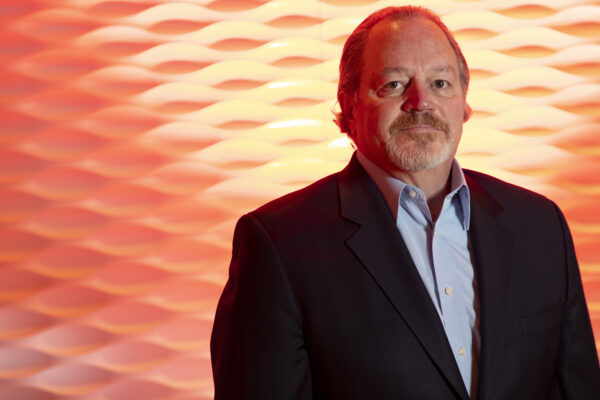 Jeff Davis, a 1995 Professional Master of Business Administration (PMBA) graduate and Perficient Chairman and CEO, was one of four esteemed alumni honored with the Washington University Olin Business School 2022 Distinguished Alumni Award. The annual awards ceremony held Friday, April 22, honored alumni who have attained distinction in their careers and become leaders in their communities. The recipients are exceptional individuals who are fulfilling Olin’s mission to produce world-class business leaders who have a strong value system and think on a global scale.

“It’s my honor to be recognized as a 2022 Distinguished Alumni Awards recipient,” said Jeff. “My time at Washington University and Olin helped influence me as a person and a leader in a number of ways, but I think the most important was the confidence it gave me to move out of my comfort zone and take on something completely different. I’m humbled to be recognized alongside this year’s honorees and to join a growing list of respected previous recipients.”

As Chairman and CEO, Jeff leads the development and execution of Perficient’s global growth strategy and initiatives and has played a central role in the company’s dramatic growth, managing organic expansion and leading Perficient’s M&A program, including the integration and assimilation of acquired businesses. Perficient consistently delivers operating metrics among the industry’s best and has grown into a leading consulting firm across many industries. During Jeff’s tenure, Perficient has grown to a more than $900 million annual revenue company with more than 6,500 global colleagues across four continents and 10 countries.

Outside of Perficient, Jeff is an active member of the board of directors of the Cystic Fibrosis Foundation of St. Louis, is a member of the University of Missouri Trulaske College of Business advisory board, and sits on the board for St. Luke’s Hospital.

Jeff was honored as a 2022 award recipient alongside these other distinguished alumni:

Pam Kendall-Rijos, managing director at Goldman Sachs, was also recognized as the 2022 Dean’s Medal Honoree during the ceremony. The 2022 recipients join an esteemed list of Olin Business School graduates who have also been recognized as Distinguished Alumni, including:

Those who are honored with the Olin Distinguished Alumni Award share the qualities not only of leadership, but of progressive thinking, high standards, uncompromising integrity, commitment, courage, and confidence. Honorees have achieved success as executives who have driven innovation and delivered superior value to their organizations. They are shaping the future of their industries and the world. Because of this, they serve as a model for all Washington University students and alumni.

Congratulations to Jeff and to the other 2022 recipients!