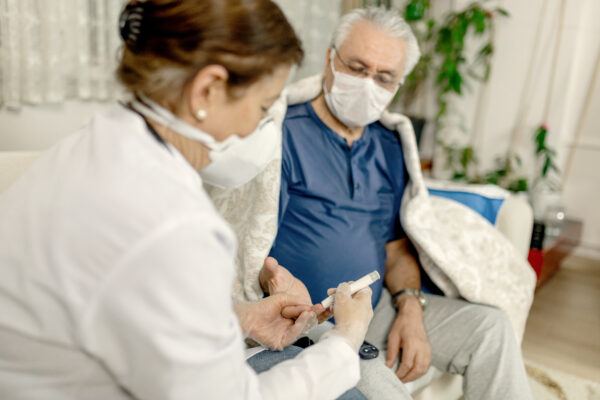 A Brief History of Diabetes Care

For more than 100 years, diabetics have been taking insulin shots to control their blood sugar. As a Type I (my body does not produce any insulin on its own) diabetic, I have been giving myself insulin shots since 1974. When I was initially diagnosed, just after President Ford had taken office, a diabetic could only measure their sugar levels through urine. 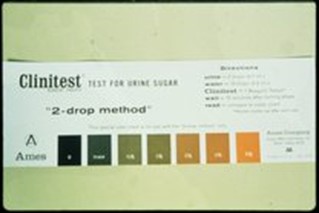 The process would start by urinating into a cup, putting a Clinitest® tablet into a test tube, and then adding drops of urine into the test tube. A chemical reaction would occur. Next, you’d decipher sugar levels using a color chart. If the solution turned blue, that meant “negative,” or lowest sugar. If it turned orange, that meant high sugar, as shown to the right. When the result indicated high sugar, the diabetic would have had to inject themselves with a combination of pork and beef insulin and wait thirty minutes for their blood sugar levels to begin to drop to a normal level.

In the 1980’s, technology advanced to the point that diabetics could measure their blood sugar at home instantly with digital readouts, eliminating the 3-4 hour lag that came with urine testing. In the 1990’s, human-hormone and fast acting insulin were developed, replacing beef and pork insulin in practical use. Insulin started working in 5 minutes rather than 30 minutes. From the mid ‘80’s to the early 2010’s, various insulin pumps were developed that would allow insulin to flow into the diabetic’s body from an externally stored container as directed by the user, avoiding insulin syringes.

Exercise, delayed eating, sickness, and certain drug interactions can all cause the blood sugar of diabetics to rise too high or drop too low. Blood sugar that is too low, hypoglycemia, can cause a person to appear drunk, slur their words, cause accidents while driving, fall, or faint. If left untreated; hypoglycemia can result in death. Blood sugar that is consistently too high, hyperglycemia, can cause long-term blood cell damage, kidney damage, blindness, the loss of limbs due to poor circulation, and heart attacks.

It is a constant balancing act for diabetics to maintain safe sugar levels. What has been the diabetic’s dream for the last 100 years is an insulin that could be injected and be “smart” enough to do this balancing for you.

It would have to know not to lower blood sugar too much if a diabetic exercises or misses a meal, but also to prevent blood sugar from rising too high if the diabetic eats in excess. In other words, a smart insulin would automatically activate or deactivate in response to changing glucose levels in the blood, thus giving tighter blood sugar management, as if the beta cells (the cells in the pancreas that should produce insulin but don’t in a diabetic’s body) were working normally. This would entirely eliminate the need to measure blood sugar and keep both hypo and hyperglycemic consequences at bay.

One firm that is working on smart insulin is Thermalin, Inc. a small biotech company started in 2008 by Dr. Michael A Weiss. Thermalin is looking to leverage a “protective hinge,” that is built into vertebrate insulins. The protective hinge is a natural structural feature that evolved more than half a billion years ago to keep the hormone stable in its closed state but foldable and functional in its open state.

As Dr. C. Ronald Kahn, Chief Academic Officer at the Joslin Diabetes Center at Harvard Medical School, stated, “In the recent study from the Weiss laboratory appearing in PNAS, we see an example of the next exciting phase of insulin development, namely development of an insulin analogue which through chemical modification can sense the level of sugar present in the blood. While the current analogue is designed to sense fructose, it seems likely that this same approach can be used to develop analogues to sense glucose.”

While the Thermalin study used fructose as a model, instead of a monosaccharide like glucose, it proves the synthetic hinge concept works. The company is now working on glucose-responsive insulin candidates that open and close at the desired high and low glucose thresholds, which are respectively 70 to 180 milligrams per deciliter.

Additional smart insulin research is being conducted by a preclinical startup also developing next-generation insulin that senses blood glucose levels and adjusts its activity accordingly. Founded in 2015, Pasadena-based Protomer was developing “smart therapeutics,” injectable drugs that can sense molecular activators in the body and automatically activate as needed. For diabetes, this includes smart insulin. Protomer describes its platform technology as chemical-biology based. The firm develops therapeutic peptides and proteins whose activity is tunable and controlled by small molecules.

In a prepared statement, Ruth Gimeno, vice president, diabetes research and clinical investigation at Eli Lilly, said “Glucose-sensing insulin is the next frontier and has the potential to revolutionize the treatment and quality of life of people with diabetes by dramatically improving both therapeutic efficacy and safety of insulin therapy.”

While Protomer’s pipeline is pre-clinical, with Eli Lilly providing the resources and knowledge to run clinical trials and make presentations to the FDA, the future of diabetes care has never looked as bright as it does now.

Clinitest® is a registered trademark of Siemens Healthcare Diagnostics Inc.