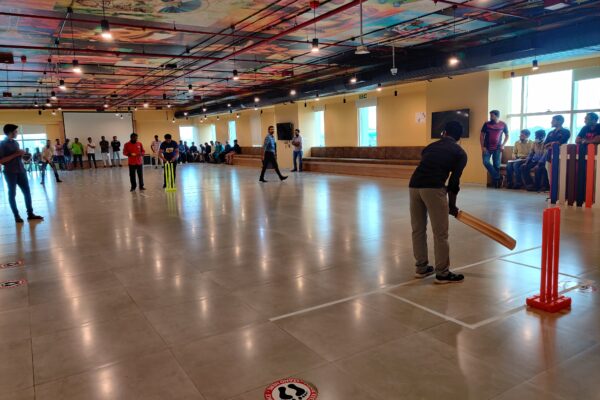 On a sunny Tuesday, while I was guiding a new intern through their bootcamp program I got a message on teams. Not unusual, you might think. Then I got another. Okay, two in two seconds? Coincidence. Then a veritable flood of messages over the next few minutes, even as I tried to keep a straight face through the call before winding it up.
Every message was the same: Enter my name for the cricket tournament, Vishnu!
I headed over to my Director’s Cabin, and Gayathri Hariharan grins at the look of mild confusion on my face. “We’re organizing a cricket tournament, Vishnu. Take a peek at Telegram and go ahead and set it up. Oh, and get some Pizza as well.”
“When’s the tournament Gayathri?” even as I protested that I didn’t know anything about cricket (Quite a serious offence in India, for our worldwide colleagues).
“Thanksgiving- Thursday.”
That cut off all the protests quickly- No time to waste!

Drawing up the boundaries

I decide to take a look at the battleground first, and reflexively duck as a bright yellow smiley ball flies over my head, missing me narrowly.
“Sorry Vishnu, just getting some practice in” greets me, as the offending batsman lifts the office cricket bat in apology. The bowler winks at me, and throws another fast ball, to be met with a resounding crack, causing me to duck again. 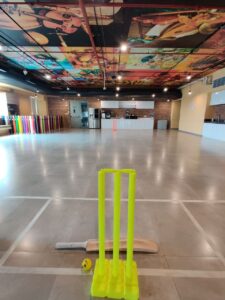 Word gets around fast.

With the help of the trusty office assistant, Rajesh, I quickly drew up the boundary lines, drawing inspiration from gully cricket- the affectionate term for street cricket in India.
We put down the lines with masking tape to make the inevitable arguments easier to resolve (If you haven’t sat through a game of gully cricket, I highly recommend it. Arguing over how many runs were scored is more entertaining than any world cup).

While outside the clouds stormed, players and spectators streaming into the cricket pitch were greeted by a blaze of warmth, ice chests with Cold Gatorade and Cola propped up, and the typical dry commendatory crackling over a mic (a must for any proper game of cricket).
6 teams were formed, split into two groups, and paired off each other in round robin style. 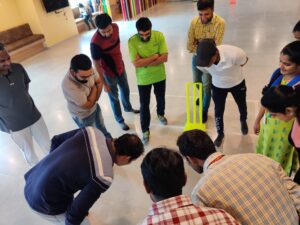 First Coin Toss of the Day

Sixes were scored, Wickets were taken, and “Howzat!” shouted every few minutes as the matches started in earnest. I’ll admit, I was rooting for the infra team myself, as part of the HCM team.
The Infra team scored an easy match against the MI team, winning by a huge margin of 15 runs. The MI team further lost their chance to enter the finals by losing to the MASS team.
The two teams met on the pitch to decide who would be playing for the finals. The Infra team came in with high expectations, and with some great bowling restricted the MASS team for 13 runs, out of 5 overs.
The plucky MASS team didn’t let their spirits down, and with a quick fall of wickets and excellent bowling ensured that the Infra team was bundled out for 8 runs, qualifying the MASS team for the finals. My hopes were dashed, but don’t worry boys- we’ll get ‘em next time. 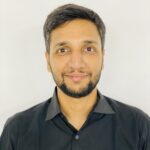 “We were admittedly nervous going against the Infra team.” says Saibalaji of the MASS team. “They had an excellent batting line-up, and we knew we were in for a tough match.”

The next set of matches began, with the KP team quickly losing to both the People and Enterprise teams. The Deciding match for who would advance to the finals dragged on as the People team were bundled out for 7 runs in 5 overs but gave a tough fight to the Enterprise batters. The Enterprise team won narrowly, scoring 8 runs with just 2 balls left.

Lunch was almost an afterthought, quite vexing considering I argued with a local pizzeria for a good hour to deliver us the pizza. Definitely worth it though, as I could personally attest to when I managed to sneak in a slice of cheesy goodness in-between matches. 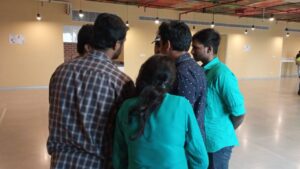 The interns discuss how to position themselves.

Everyone gathered for the final match – Directors vs Interns (As a fellow intern, never have I been so glad that I didn’t know to play cricket before)
A tough match was played, as the game quickly descended into a battle. The Interns batted first, managing a respectable 15 runs under the tough bowling by the opponent’s team. It was time for the Directors to enter the field.

The Bowler rubbed the ball against his tracks for luck and let fly. The Batsman swung and….duck out!

The next Batsman walked over to the crease – another duck out! The captain was up.

He stepped up and the first bowl was tossed. The ball flew straight towards the bowler, who reached out to catch it- was it going to be a duck?
The bowler fumbled the ball, and you could hear an audible sigh of relief. As if to make up for his fumble, the next ball was thrown in a blaze. 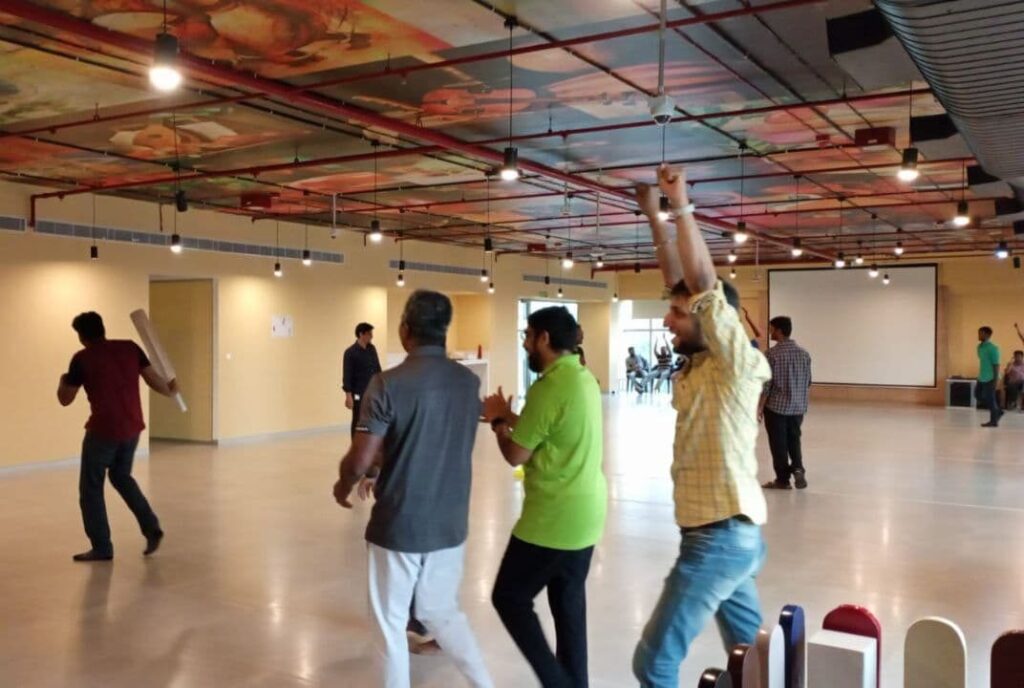 The team cheers as the match is won!

What followed was a quick succession of shots, quickly pulling the team ahead, as the team recovered from their slump.
“Five balls, five runs to go.” The umpire announced.
The captain stepped back, took a swing- a six! The MASS team had won the tournament with a splash. 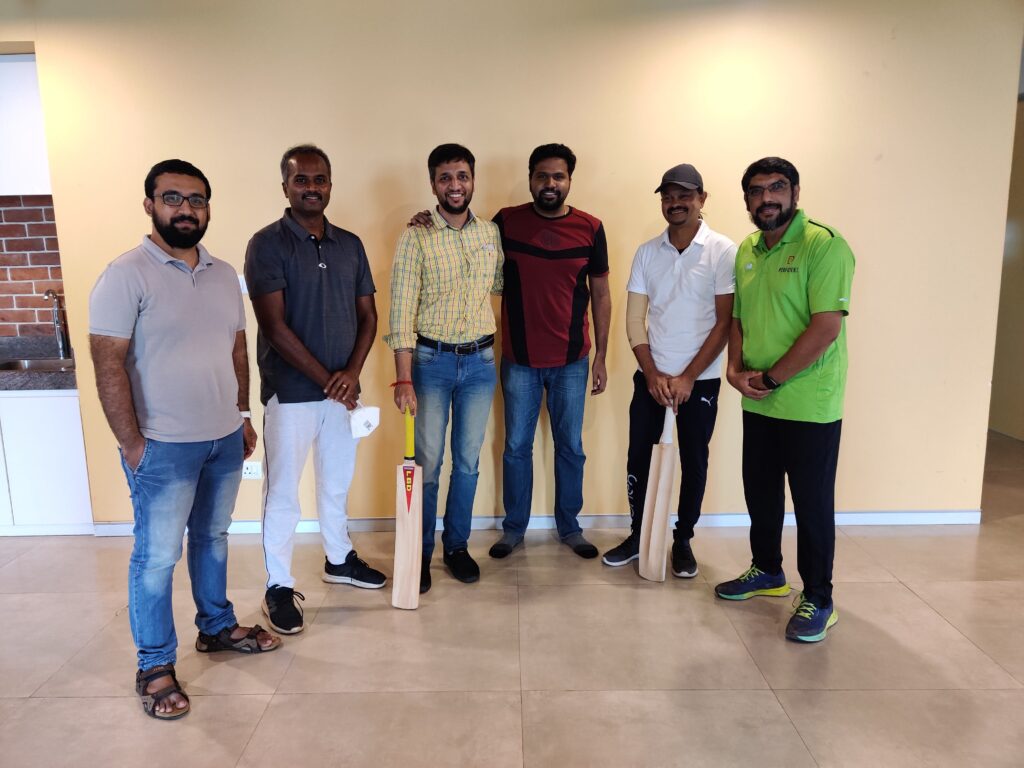 As the team ran to celebrate, I heard a voice behind me.
“Great work organizing the tournament Vishnu- Let’s have a movie night tomorrow to wind down from the match. Look into getting some Goli soda’s, won’t you?”
Help.

Vishnu Aditya is a bright-eyed and bushy-tailed graduate fresh out of business school with a dual specialization in Human Resources & Marketing. Passionate about engaging with people and making a difference, he started his career in Human resources and looks forward to his growth at Perficient. He is affiliated with over five different NGOs in Disaster Management, Animal welfare, Environmentalism, Children’s Welfare, and LGBTQIA rights. He believes in giving back to the community in whichever way possible.