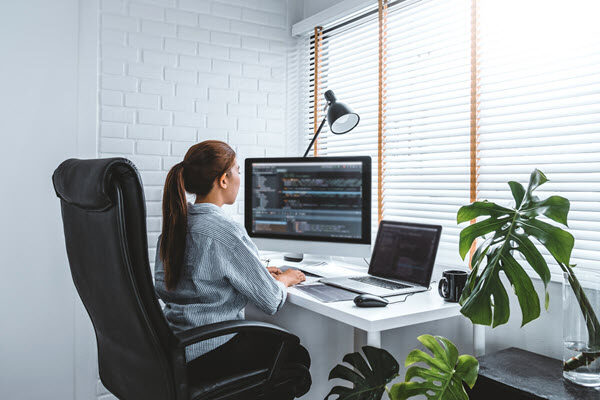 Expand the example to four, six, or eight people (cores) with and without hyperthreading.  You can see that adding more people greatly increases the speed at which you can empty the bowl. Being able to use both hands increases the speed as well, but each mouth can only chew one piece of candy at a time, so the increase is less than adding another person.

I have a computer with one socket, 6 physical cores, and 12 logical processors.  When I create a new virtual machine, I am offered the ability to assign 12 processors to the VM.  If I assign all 12 logical processors to the VM, the CPU scheduler will think it has 12 physical cores.  This will cause each of the hyperthreads to run at 50% utilization and the cores to run at 100% utilization and lead to degraded performance for both the VM and the host.  It is best to not assign more than the number of physical cores to a single VM.

I like to leave at least one core fully available to the host.  If you run multiple VMs on the same host, the total number of cores assigned to VMs can exceed the number of physical cores.  This is called overcommitment.  With multiple VMs running under normal load, the performance should not degrade as each VM gets a chance to utilize the host CPU.  You can experience decreased performance if one or more of the VMs has high load continuously.  You can easily change the number of CPUs assigned to a VM by stopping the VM and changing the settings.  The guest will instantly recognize the assigned CPUs.  Deciding the number of cores to assign to a VM is an art.  You do not want to assign too few or too many resources.  The final values depend on the workload being performed by the VM.

Whether you run your containers on your host or in a VM, your application will take a hit to performance.   Luckily, we can tune the performance of our containers by adjusting CPUs and memory.  You can adjust the number of CPUs available to the container by using the –cpus flag on the docker create/run command or in a docker-compose file.  If no value is provided docker will use a default value.  On windows, a container defaults to using two CPUs.  If hyperthreading is available this is one core and two logical processors.  If hyperthreading is not available this is two cores and two logical processors.  On linux, a container defaults to using all available CPUs of the host.  Just like virtual machines, finding the right amount of resources is an art.  The final values depend on the work load being performed by the container.  Unlike virtual machines, you cannot change the configuration of an existing container, you must destroy the container, change the settings and create a new container.

There is no magic formula for determining the “right” size for a VM or a container.  It depends on the amount of available resources on the host, the ability to scale the host, the requirements of the application, the average load of the application, the peak load of the application, and other applications running on the host.  Docker creates a process called “Vmmem” on windows that represents the CPU and memory usage of the container.  If the CPU for this process is constantly running at 30% or above, you could consider increasing the number of CPUs for the container.  If the memory is constantly running at 100% of the allocated amount, you could consider increasing the amount of ram for the container.  Memory is a bit harder to judge than CPU as memory is meant to be utilized at a higher rate to keep application data quickly accessible. Having too little memory causes heavy load on the CPU as it swaps data between memory and disk.  Assigning too much memory can cause performance issues for the host.

I’ve created several containers on both my host and inside a VM using both linux and windows containers.  The tables below list the configurations and the number of CPUs for each scenario.

I’ve created a windows container that runs iis and hosts a content managed website.  I’ve adjusted the memory limit to find the best settings.  As mentioned before, with no mem_limit set, windows containers default to 1GB of physical ram.  It makes sense that this container was performing slowly as it only had 36MB of free ram.  Testing different values of 2GB, 3GB, and 4GB I noticed that the amount of free ram also increased.  For my container, it seems that I do not gain any benefit setting a mem_limit higher than 2GB.

To have your containers perform well, you should not trust the default docker settings.  Use the cpus and cpuset-cpus flags when possible.  Watch your task manager for high usage and adjust your container settings as needed.  Connect to the console of your container to see what resources your container can see and how they are being used.  You can improve the performance of your containers by adjusting cpu and memory settings, but your application will likely never run as fast it could outside of a container.