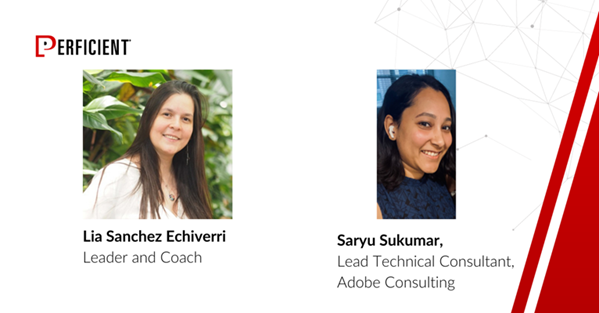 This is the second blog in a series covering our Women in Tech ERG’s ongoing career growth panels. Read the first blog in the series here.

Our Women in Tech ERG holds a strong commitment to promoting and enabling career growth and progression for all Perficient colleagues. To support this goal, the WiT ERG has been hosting panels every other month, each installment highlighting two or three extraordinary employees.

The second panel in the series featured two colleagues from our global offices. Lia Sanchez Echeverri is a coach and leader based in Colombia. She started at Perficient Latin America, formerly PSL, as a part-time administrative employee while studying philosophy at university. Lia did not have a technology background and credits colleagues for giving her opportunities to learn more about software development and encourage her professional growth.

Saryu Sukumar is a lead technical consultant aligned to our Adobe practice. Saryu began her journey with Perficient at our Chennai, India, office, and her career growth sparked a move to the U.S. She said support and encouragement from leadership made her move and the growth and advancement she gained from the move possible. 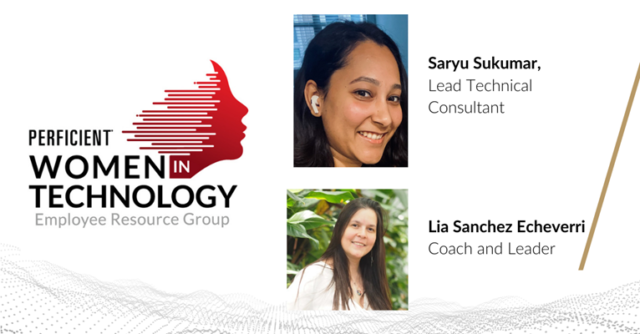 The facilitator for the panel was Liz Stuart, an alliance director at Perficient. Liz’s expertise and dedication to emerging solutions have led to her recognition as one of CRN’s Women of the Channel.

Lia and Saryu shared valuable lessons on career growth during the panel. They explained some of their experiences that made it possible for them to excel in their careers and always keep moving and growing.

The Importance of Mentorship

Both Saryu and Lia are extremely open to the need for mentorships and sponsorships to pave the way for advancement, whether professional or personal.

Lia’s career at Perficient grew from a part-time internship to a full-time leadership position through colleagues nurturing her curiosity about technology and presenting her with learning opportunities. She said as she grew, she paid it forward by mentoring other colleagues the way others had done for her. Out of that, her passion for helping others grew, and she took on more leadership roles to act on this passion.

Saryu found sponsorship not only in professional mentoring but by others lending her support on a life-altering occasion. Saryu moved from Chennai to the United States several years ago and relied on colleagues and the leadership team helping to sponsor her to move across the world. Once she moved from the off-shore environment to on-shore consulting, she also received support from teammates helping her transition to her new position.

Saryu began to consider moving to the U.S. back in 2018. She was already an experienced AEM developer and wanted to grow and see the entirety of the software development lifecycle. Saryu said it was daunting to ask for something so big, but she received tremendous support from her supervisor. She remembered that the process to move began just a few hours later and her supervisor helped connect her to the right team to help her accomplish her goal.

Giving and Receiving the Gift of Feedback

Feedback is just as crucial to growth, as Saryu and Lia realized.

Saryu said she used to struggle with receiving feedback and took it extremely personally. She came from a former office culture where feedback was only critical, and part of her growth with Perficient was learning how to re-frame her point of view on feedback. With guidance from a colleague, Saryu came to understand how essential constructive criticism is.

Lia said receiving feedback was a central pillar of her career progression. She relies on it to lead her decisions and assist her career, especially since she doesn’t have a background in technology. Lia shared a story about how she received feedback to “always be the last to speak” to allow quieter colleagues a chance to share opinions in meetings. She finds it absolutely invigorating when someone gives feedback and sees it as a gift to receive feedback even when it might be uncomfortable.

The Always-Changing Path to Success

Saryu and Lia are both extremely accomplished and talented women, and Liz asked how they both define “success.”

Saryu says success will always be a moving target because she is always going through personal and professional changes. Once she achieves one milestone in success, the target changes to encourage her to continue growing and improving.

She said the most important thing to her regarding success is always contributing as much as she can to an organization and leaving her mark. With Perficient, she currently mentors newer employees and serves as a WiT Committee to help bridge connections between global and domestic teams.

Lia has a different perspective on success and what it means to her. Lia says she doesn’t look for traditional success in her career, and she strives for fulfillment and purpose in her work. She says if she is fulfilled and enjoying her career, she considers that to be a success. Lia said her career will always be evolving and changing, and as long as she feels she is living up to her purpose of helping others and leaving a positive impact, that is all she needs. She remarked, “I don’t know what success looks like for me, but I am pretty satisfied.”

Saryu and Lia both received lots of support and opportunities from others to get to where they are in their careers now, and they strive to pay it back to those who helped them by paying it forward and lifting others up in their careers.

Lia says the biggest gift her mentors and sponsors gave her was helping her find her unique talents and expand on those. So, she tries to help others find their “superpowers” and carve out their unique path to career growth. Lia says you can never be the best if you just follow the same path that others have already walked. It is all about finding your unique way to improvement. She also said being self-aware and knowing your talents are the best weapon against biases people might hold based on gender or race. If you know your worth, others cannot tell you who you are and what you can or cannot achieve.

Saryu’s biggest way of paying it forward is helping find opportunities to build stronger professional and social interactions globally. She has a unique perspective on Perficient’s global culture since she has worked both off- and on-shore. Saryu’s work in WiT helps her achieve this as WiT provides a unified platform for all women and allies at Perficient, no matter where they might be based.

Aimee is a Marketing Coordinator on the Digital Marketing team based out of St. Louis, Missouri. When she is not strategizing about SEO best practices, she enjoys theatre, reading, and hiking. Aimee is an avid hockey fan and loves (loudly) cheering on the St. Louis Blues!