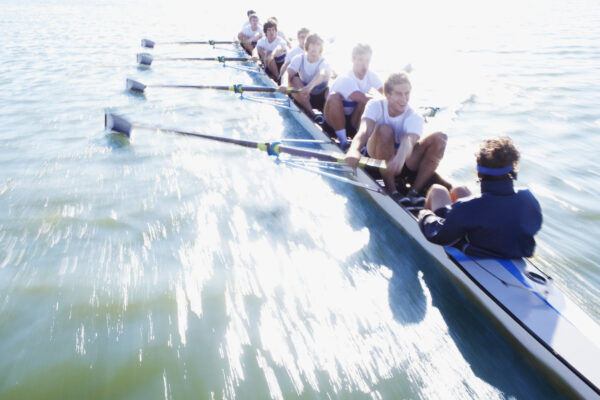 During the past year, leaders have faced numerous challenges while leading their organizations through changes as a result of the pandemic, unrest, and uncertainty. A key challenge for organizations has been learning to effectively and efficiently collaborate in a virtual workplace where all members work together in unison. Rowing, also known as Crew, is a competitive sport that requires a higher degree of individuals working together as a team than in any other sport.

Consider the following example of nine students from the University of Washington to learn how you can improve the levels of teamwork and collaboration to lead change in your organization. During the depths of the Great Depression in 1936, an obscure rowing team from the University of Washington traveled to Germany to participate in the Olympic Games. The nine “boys” came from small mining and lumber towns who donated bits of money so the team could travel to Berlin.

Upon their arrival in Germany, every aspect of the competition seemed stacked against them. Yet, something happened in the race, a term used by those in the sport of rowing as “swing”.

Read the description below based on the book The Boys in the Boat by Daniel James Brown:

There is a thing that sometimes happens that is hard to achieve and hard to define. It’s called “swing.” It happens only when all are rowing in such perfect unison that not a single action is out of sync.

Rowers must rein in their fierce independence and at the same time hold true to their individual capabilities. Races are not won by clones. Good crews are good blends – someone to lead the charge, someone to hold something in reserve, someone to fight the fight, someone to make peace. No rower is more valuable than another, all are assets to the boat, but if they are to row well together, each must adjust to the needs and capabilities of the others – the shorter-armed person reaching a little farther, the longer-armed person pulling in just a bit.

Differences can be turned to advantage instead of disadvantage. Only then will it feel as if the boat is moving on its own. Only then does pain entirely give way to exultation. Good “swing” feels like poetry.

Recently, I worked on two project teams where we achieved a degree of swing. Like the rowing team, we had a good blend of knowledge and experience. Everyone was valued and understood how their role fit into the team successfully achieving our goal. During the final week of the project, it was as if we were all rowing together in perfect unison with each stroke of our oars as we sprinted to the finish.

Many years after this young rowing team won gold at the 1936 Olympics, Joe Rantz, a member of the team and now in his mid-seventies, was interviewed by Brown. In the interview, Rantz recalled that the “boat” made a vital difference in the team’s ability to achieve “swing”. Initially, Brown assumed Rantz was only referring to the literal boat in which he and his teammates competed. However, Brown quickly realized that to Rantz, the “boat” also symbolized the “shared experience” of rowing with friends “bound together forever by pride and respect and love”. Thus, one of the most important factors to experience swing is to reach high levels of teamwork through trust and personal connections with others.

While the past year has prevented us from physically sitting next to teammates in our “boats”, we have learned to collaborate, communicate, and connect through electronic and virtual methods. These changes can add to our “shared experience” and further bind us together as a team as we adapt and adopt to new ways of working together.

The account of how the nine members of the 1936 Olympic rowing team formed a strong team, achieved swing, and won the gold is a remarkable and inspiring story. How has your team achieved swing this year by achieving unity, trust, and personal connections while working through the hardships and uncertainty?

Mike is a Director for Perficient's Organizational Change Management practice and part of the Management Consulting group. He has over 20 years of experience and resides in Phoenix, Arizona.