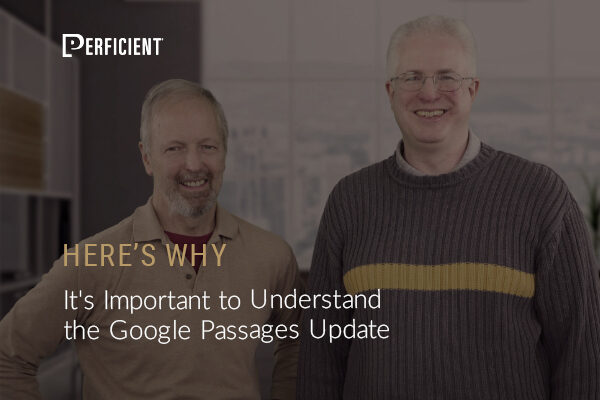 On Thursday October 14th, Google announced a new aspect of Google search, which the company refers to as passages. This update caused some confusion around whether it is a ranking or an indexing change.

In this episode of the award-winning Here’s Why digital marketing video series, Eric Enge and Mats Tolander explain the announcements and what digital marketers can expect from the update.

Eric: Hey, everybody. Welcome to another episode of “Here’s Why.” Eric Enge here. I’m the Principal with the Digital Marketing Solutions Business unit at Perficient. And today, please welcome Mats Tolander. He’s our SEO Tools Director here at Perficient. And guess what, you might guess in that role that he helps us with a lot of technical SEO stuff with clients. Say hey, Mats.

So Mats, on Thursday October 14th, a little over a week ago, Google announced a new aspect of Google search that the company refers to as passages. By passages, they mean a portion of the main content of a webpage. What they said is that as of sometime this year, they can start ranking pages for a query based on a specific passage within the page. This will allow Google to better serve what the company calls specific queries. Now, Mats, what does this mean?

Mats: So I guess until what we can call the passages update, Google would rank a page for a query based on essentially the entirety of the page or certainly the main content of the page, which really could result in pages that contain passages or snippets that are very highly relevant to the query. Those pages might not make it into the top 10 because the overall content of the page would sort of dilute the relevance of the relevant passage.

So with the passages update, Google can rank a page on the passage that is relevant to the query, which Google has said will improve results for about 7% of searches. Now you can probably get to that 7% in different ways, but let’s say it’s a net 7%, but that sounds like a remarkable improvement.

Eric: I agree. And I think one way to think about the difference between pre and post passages update is basically it looks at how featured snippets are selected. Before passages, the algorithms would rank 10 pages that best match the query, taking into consideration quality signals and perhaps other factors. And from those 10 pages, the featured snippet algo might choose a snippet that as directly as possible responds to that query. And I like to think of featured snippets as query relevance liberated from all other considerations, which is possible because it’s selected from 10 pages that have already really passed the basic quality hurdles.

Mats: Yes. And with the ability to rank pages based on the passages rather than the entire page, Google can get a better set of pages from which to choose the featured snippet.

Eric: Got it. And even regular snippets will probably benefit from the update too, right? Since the algorithm will be able to select pages that have passages that match a query better than the case is today. So instead of using a page meta description for the snippet, the algo will likely extract the snippet from the passage.

That in itself isn’t likely to be much different from before the update, but the pages on the first page of the SERP will contain passages that better match the query, hence likely containing better snippets. So really the announcement of this passages update, which by the way is not Google’s official name for the update, caused quite a bit of confusion though.

Mats: Yes, it certainly did because in the On Search 2020 video, the narrator Cathy Edwards, who is the Vice President of Engineering at Google, she pretty emphatically referred to the passages change as a change in indexing. And in a companion blog post that Google published the same day, they refer to it as a change in both indexing and ranking. But then that has been clarified multiple times as this being a ranking change not an indexing change. So that was quite a bit of confusion.

Eric: I agree. And I saw some confusion too. I read a Search Engine Land post, which generally speaking provides awesome coverage, where within the same post, it emphatically said that it wasn’t an indexing change yet Google had quotes in there talking about it like an indexing change. And it was like, okay, I don’t even know where to go with that.

But one can speculate that passages isn’t about indexing per se, but perhaps touches the index maybe in terms of annotations. And to completely run wild with the speculation for a moment, maybe the annotations are vectors that Google uses to match vectorized queries to maintain fast scoring and retrieval.

Mats: Yes. It could maybe be something like that that sort of drives this what seems to be some internal confusion at Google about whether it was indexing or ranking. Now, of course, it may seem trivial altogether whether the passages update is in fact changing the indexing or ranking, but I don’t think it is.

Now for one thing, let’s think back to the August 10th meltdown in the search results that you may recall. And certainly, I thought of that as a ranking problem that for some reason I had popped up, but Google said strongly that it was in fact an indexing problem that caused the whole situation.

Now more practically as it relates to passages, I think if it had been an indexing change, that would have raised a number of questions that would have been rather interesting. So, for example, how many passages could there be for a page, could passages be overlapping, could a passage be fully enveloping of another passage, etc. I think that was a lot of questions that popped up if this had been in fact an indexing change.

Eric: Right. Some questions remain though. And the most interesting one is perhaps how far topically a page can deviate from a query and still contain a passage that results in a page one ranking. You have that very specific passage that really addresses the query, but the rest of the page arguably might even be irrelevant to it. And I expect that there’ll be some experiments along those lines as well as observations based on unexpected rankings for non-experimental pages.

Mats: Right. Just kind of what people see out in the wild, I guess. And now the other thing to keep in mind here though, is that obviously when something new comes out, we like to focus in on or zero in on the change itself but it’s also important to keep in mind what is not changing.

This use of passages is specifically for what Google calls specific queries. More general broader queries, they will, as I understand it, continue to rely on algorithmic evaluation of the entire page content. So, you certainly don’t want to go out and create these potpourri of pages or topics in the hope for ranking for all sorts of specific queries.

Eric: That makes sense. And I guess the question then is as a practical matter, is it possible to optimize for passages?

Mats: Yes. So, who knows? My initial hypothesis really is that clear, succinct writing where you have sentences that address clearly not necessarily specific queries but certainly specific topics, I believe that is really the way to optimize for something like the passages update. In a way, it’s not dissimilar from the basic optimization that one might undertake in order to get featured snippets in many cases.

Eric: Right. I think that’s a good prediction. And for me, this whole update is a reminder of the vastness of the diversity of user needs in virtually every business marketing in the marketing space.

And I think as marketers, we continually underestimate this, but the long-tail theory teaches us that the quantity of things that users need or want to know about that falls into what one might call a long-tail query is significantly greater than the quantity of queries that come in from a head term perspective. And Google literally implemented an algorithm to go chase these specific snippets of content for where they couldn’t find pages that address the topics.

The complexity of search remains as vast as ever and the passages update is a step forward for Google.