According to Microsoft’s roadmap, sometime this month you will have the ability to keep organizational data confidential on Teams iOS and Android apps lock screens by blocking data from appearing in notification previews. As the admin, you will have the ability to block organizational data from reappearing in the Teams mobile notifications (i.e. message preview, channel, or sender name) on both iOS and Android devices end-user lock screens. This will require the configuration of an Intune App Protection Policy (APP) setting Org data notifications with a value of Block org data. Below is an example of what this will look like before (allow org data) and after (block org data).

Another update slated for October, that I’m sure many are anxiously awaiting involves the ability to restrict unmuting during the meeting. As a meeting organizer, you will now be able to prevent attendees from unmuting themselves during a meeting. Once you receive this update, the organizer will see a new setting on the meeting options page entitled “Allow attendees to unmute”. This setting can be toggled on/off before the meeting starts depending on whether or not you want attendees to have the ability to unmute themselves during the meeting. By default, “Allow attendees to unmute” will be set to ON. During the meeting, the organizer will be able to change whether or not attendees can unmute themselves by going to the ellipses ( … ) menu at the top of the participant list. When enabled, if an attendee raises their hand, an option to “Allow to unmute” will be present after right-clicking the attendee’s name in either the participant list or the main meeting stage. Also, coming later in Q4 2020 you will have the added ability to:

Although this roadmap item indicates it will be rolled out in September, Microsoft has just begun rolling out some updates to the meeting participant reports. Now the reports will have the added ability to: 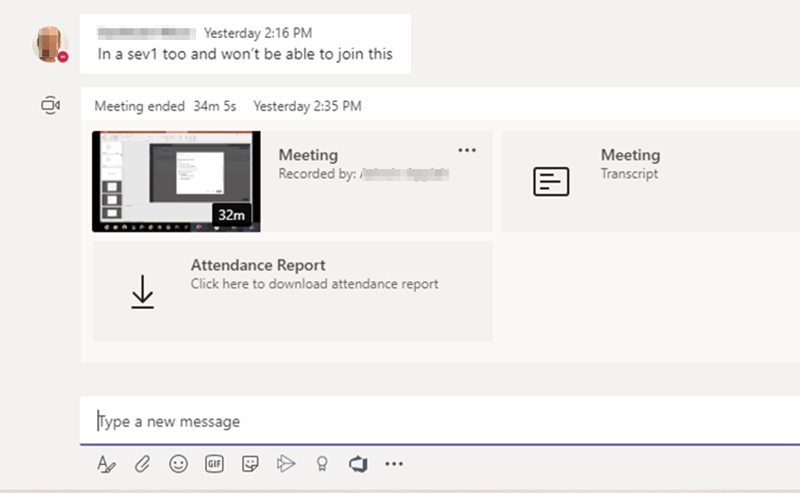 To turn this feature on a Teams admin will just need to issue the following command in PowerShell: Set-CsTeamsMeetingPolicy -Identity Global – AllowEngagementReport “Enabled”

Yes, you read that right, 20,000! If your tenant has the “Advanced Communications add-on” you will soon have the ability to support 20,000 meeting attendees as view-only participants. According to the roadmap item, this feature will begin rolling out at the end of October and is expected to be complete by the end of November. Currently, Teams meetings are limited to 300 users, and if user 301 tries to join, they will be unable to do so. Now, with the purchase of the Advanced Communications add-on, users who are assigned the Advanced Communications license will be able to host a meeting with up to 20,000 people as view-only attendees after the meeting has reached its capacity (300). For the users that joined the meeting before it reached capacity, they won’t experience anything different. However, once the maximum is reached all other participants will have the view-only capability. If the Advanced Communication limit is reached, no additional view-only attendees will be able to join. Some things to note:

With this latest update, Microsoft Teams users can now more easily communicate using multiple languages. For any user that writes different messages in different languages, you will soon see spellchecking relevant to the language you’re using. This feature is currently only supported in the Teams desktop app and has actually already started to roll-out to some tenants. Microsoft expects this to be completely rolled out by the end of October and this feature can be toggled on/off by users in the Teams App Settings > General.

Don’t like being bothered? No worries, Microsoft is giving you the ability to set your presence as “Offline”. This feature is rolling out in mid-October and is expected to be completed by the end of October. 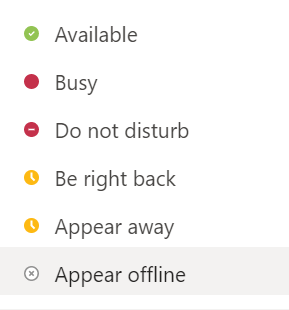 To ensure a better join experience for meeting participants Microsoft is making some minor formatting updates with clearer language to the meeting invitation email. Instead of the meeting invite showing “Join Microsoft Teams Meeting” it will instead be replaced with “Click here to join the meeting“.

In addition, those that are calling into the meeting via a phone number (PSTN) will get helpful guidance for when to call in:

Microsoft will be rolling out these updates in mid-October, so keep an eye out!

Microsoft was initially planning on rolling this feature out in September, but due to the large number of changes flowing into the Teams service, Microsoft has opted to wait until the end of October to deploy this feature update. According to the Microsoft roadmap, Microsoft will be adding in a notification that alerts Teams meeting participants when five minutes are remaining in a scheduled meeting.

Note: This will just be an informational notification and will not automatically terminate the meeting.

This notification will only appear on the screen for 10 seconds and will disappear without any user intervention.

I have actually already touched on this update in one of my other blogs, but if you haven’t had a chance to check it out, Microsoft is changing the storage location for new Teams meeting recordings to be stored on and served from, OneDrive and SharePoint instead of Microsoft Stream. At this time you can either opt-in, opt-out or take no action. The following timings will be applicable depending on your decision to opt-in/opt-out/do nothing:

I recommend checking out my blog referenced above for more details!

According to Microsoft’s roadmap, soon you’ll be able to set a duration for your presence status in Teams! Microsoft plans on rolling this out at the end of October and this should be completely rolled out to all tenants by mid-November. Soon end users will be able to define how long they want a presence state to remain active. This Teams setting will override any other events (i.e. calendar meetings or calls). 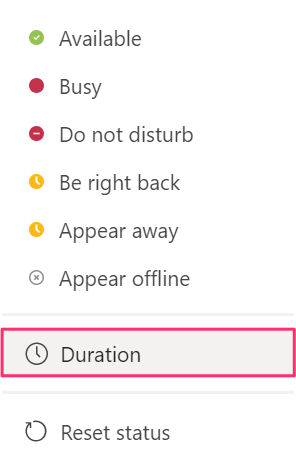 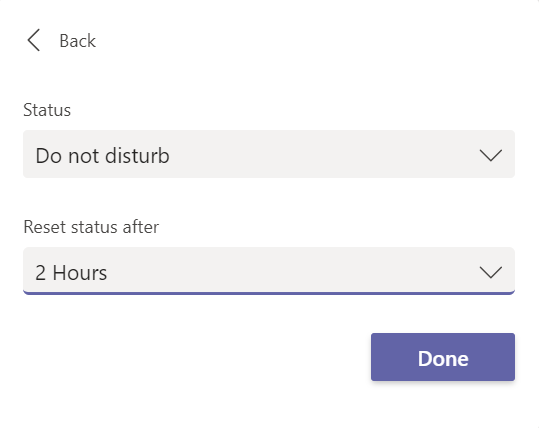 Manage meeting options as the organizer

This latest feature will be rolling out in mid-October, and will now give meeting organizers the ability to view and update meeting options within the meeting, making it that much easier/faster to manage meeting options. During a meeting, the organizer will be able to go to the ellipses ( … ) in the Teams meeting window and select “Meeting options”. From there they will see the configured meeting options for that particular meeting and can modify directly in the meeting if need be. 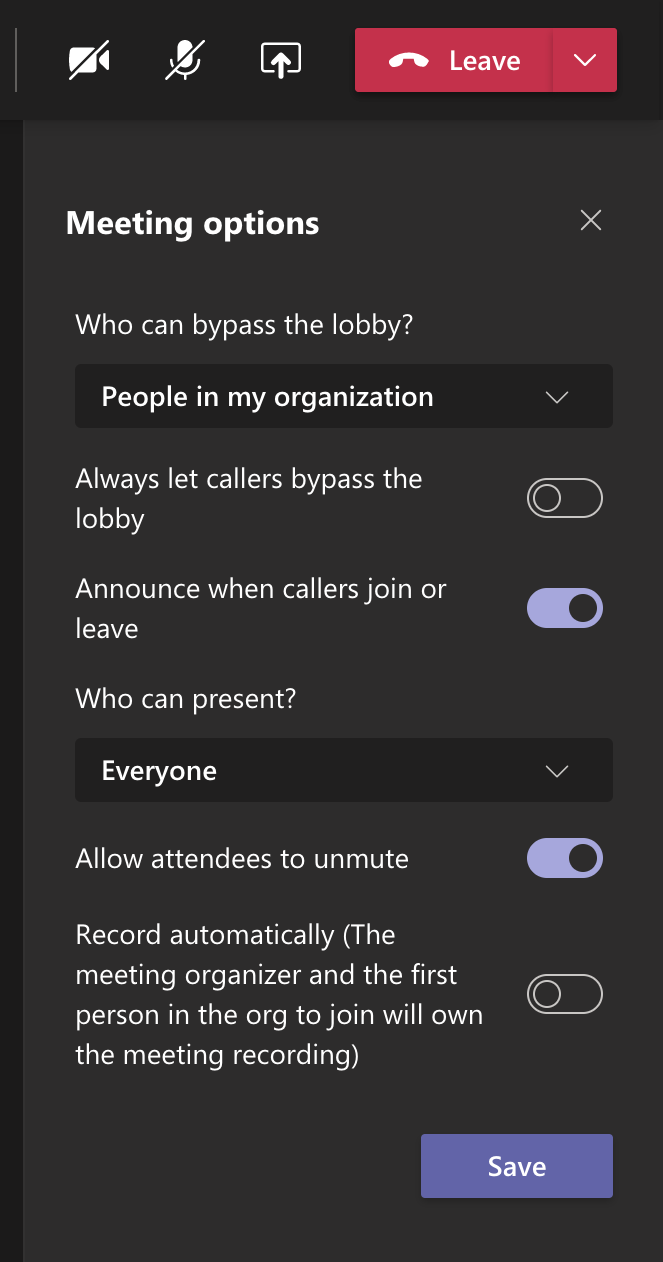 You may remember, over the summer Microsoft added a level of privacy for meeting participants who call into the Teams meeting via audio conferencing (PSTN) by automatically masking any PSTN participant’s phone number to users from outside of your organization who might be on the call. All of this was automatic in the past, but now Microsoft is giving admins the added ability to control this feature. Starting in mid-October, admins will have the following controls for number masking:

Note: These changes will need to be made by your admin within PowerShell.

According to Microsoft’s roadmap, starting at the end of October into the end of November, the new pre-join meeting experience will retain the video toggle underneath the preview window and even include a quick way to access your background filters. You’ll now be able to easily see all of the available audio options on the right-hand side of the preview window with the options to configure your microphone status (mute/unmute), speaker volume, devices, and the ability to add a Teams meeting room. 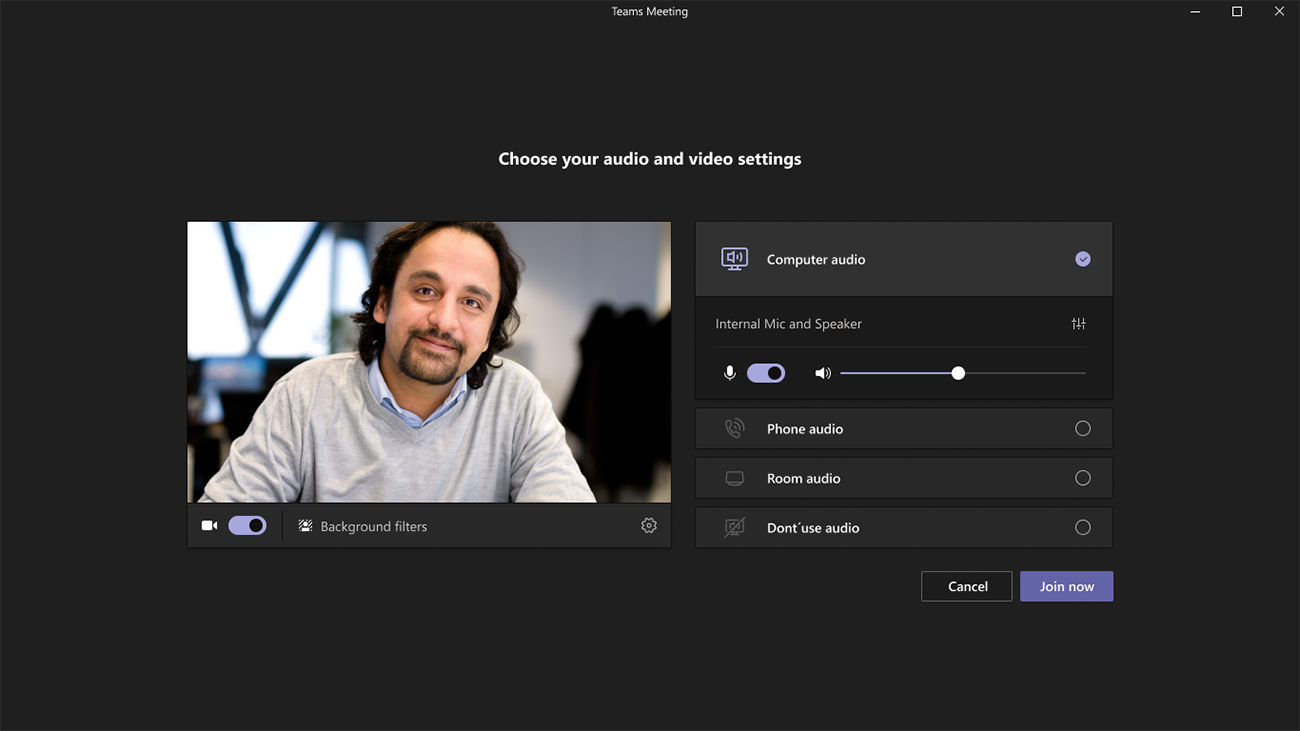 In the past, there was a limit of 20 participants for meeting notes, anything over that, and the Meeting Notes feature would not be an option. However, with this upcoming change, meeting notes will support 100 users by default, and participants who have access to the notes will no longer run into issues where they would lose access to the notes section. In addition, once the 101st participant (and beyond) joins the meeting, they will be able to request access to notes with a single click from the creator of the meeting’s notes. For the Teams admins out there that want to use this feature, make sure you have the “AllowSharedNotes” policy setting enabled!

Transfer Teams meetings between devices or add another device

You may already have this feature, as Microsoft has indicated that they are in the process of rolling this out in production and expect this to be complete by October 16th. If you are one of the rare tenants that haven’t received this update yet it is likely because you have a GCC tenant which in this case means you’ll need to wait until the end of October before you can expect to see this added feature. With this latest update, meeting participants will be able to transfer between a mobile device and computer when logged in with the same Azure AD account. Additionally, meeting participants can add another device as a companion to their meeting. If you’re wondering how to do this, it’s actually pretty straight forward: 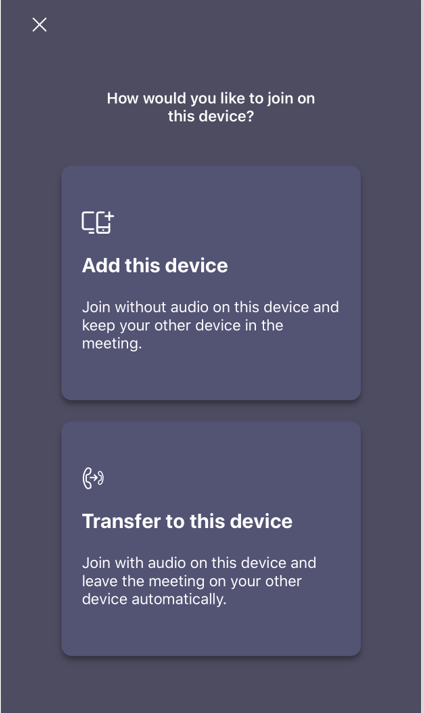 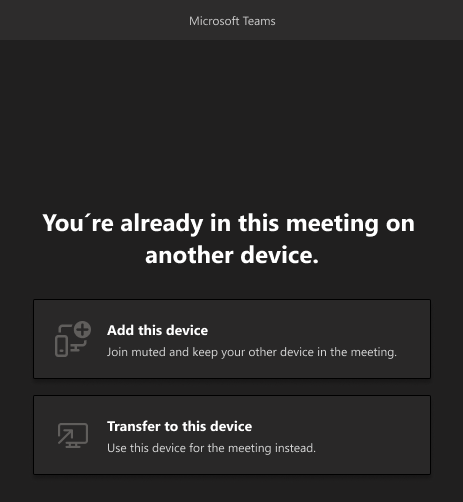 Long-awaited, and highly requested, Microsoft will be releasing the ability to host a Virtual Breakout Room in mid-November! If you’re unfamiliar with what a breakout room is, basically they allow meeting organizers to split main meetings into smaller sessions for focused discussions. As the meeting host, you’ll be able to assign participants to a room and call them back to the larger group when the breakout is complete. I will have a separate blog dedicated just to virtual breakout rooms in the near future, so stay tuned! 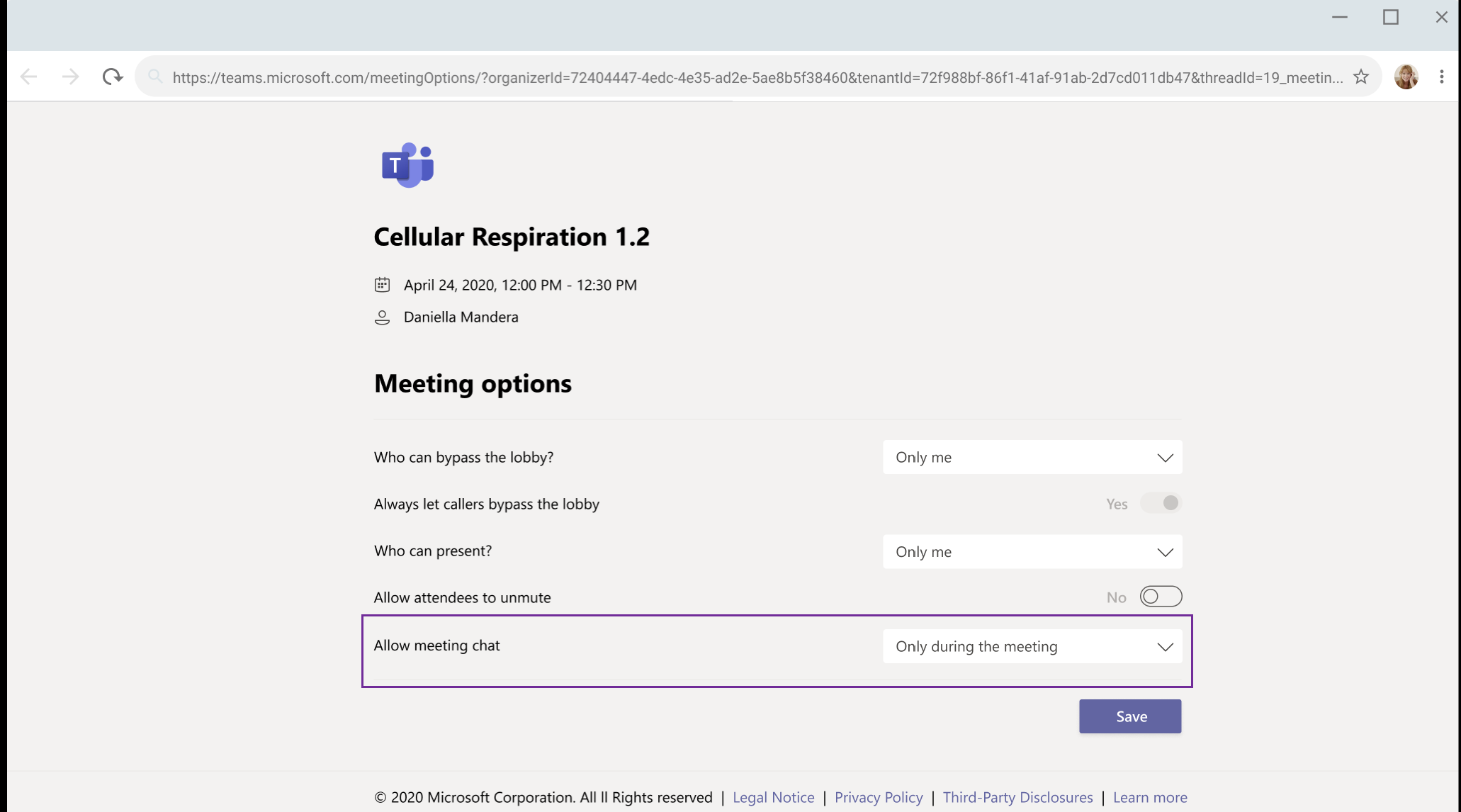 According to Microsoft’s roadmap, starting mid-November your users will be able to choose their preferred means of Teams notification delivery, whether that be via the Teams built-in notifications or via the native OS notification system. If you wish to change this to the Windows OS notifications system you can do that within the Teams Notification Settings:

For all of you macOS users out there, don’t worry Microsoft hasn’t forgotten about you! Microsoft has a separate roadmap item, for native notifications in Teams. You can expect this to become available mid-November!

As announced during Ignite, Microsoft will soon be releasing three new surfaces for your Teams meetings:

This will begin rolling out in late October, and you can learn more about this here and here.

If recording (Allow Cloud Recording) and transcription (Allow transcription) have been enabled there will be two additional options in the meeting control bar:

That wraps up all of the Teams updates for the months of October and November! As you can see a lot is coming to Teams over the next couple of months, so I encourage you to check back regularly as I plan on going over some of these features in more detail upon their release!