Microsoft just wrapped up its first-ever digital Ignite, and there were a plethora of announcements around Microsoft Teams! With over 40 sessions and 48 hours of continuous learning for Microsoft Teams, there was definitely a lot of content to consume in a short amount of time! That’s where I come in! In today’s blog, we’ll highlight some of the most significant Teams announcements from Ignite, so you can stay up to date on the latest and greatest features and functionality coming to Teams!

Back in July, Microsoft announced Together Mode, which is a virtual conference room that reimagines the meeting experience and helps colleagues feel closer to one another even if they’re working remotely. With this latest announcement, you can now use Together mode scenes, which allows you to customize the background into things like an auditorium, a conference room, or maybe just a coffee shop. You can expect Together Scenes to drop sometime this calendar year!

Show content the way you want! With custom layout enhancements in Teams, you can customize how content shows up for the participants of a meeting. This allows the presenter’s video to be transposed onto the foreground of the slide they’re presenting, giving you a more dynamic content viewing experience. Custom layouts are coming later this calendar year!

One significant feature that Microsoft lacked compared to other conferencing platforms (like Zoom) was using a breakout room. If you’re unfamiliar with breakout rooms, they basically allow you to split up meeting participants into smaller subsets/groups so they can brainstorm in a separate working session. Although there were workarounds that you could perform to get a similar experience, Microsoft never had an out-of-box breakout room experience, until now. With the new breakout rooms, presenters will hop between the different breakout rooms, make announcements to the places, and close the rooms to bring everyone back into the main meeting space. This was definitely a massive ask from the community, so its good to see Microsoft is actually listening to our feedback! You can expect to see breakout rooms in October! 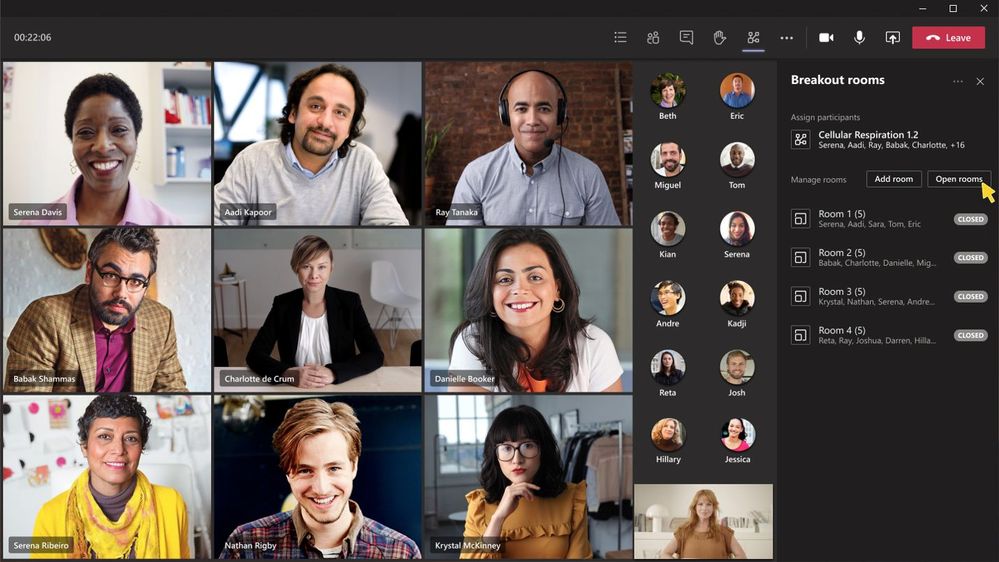 With so many scheduled meetings, sometimes things start to blend and mix together, making it difficult to remember what you covered in each particular session. Luckily for you, Microsoft is releasing a meeting recap feature, which helps you stay on track by bringing meeting recordings, transcripts, chats, shared files, and more into the meeting Chat tab following a meeting. So whether you weren’t able to attend the meeting, or maybe you’re just having trouble remembering what was covered during the session, now you’ll have a one-stop-shop for the meeting content that you can easily reference! Best of all, the meeting recap will also be available in the meeting, even in your Outlook calendar! You can start utilizing a meeting recap later this calendar year! 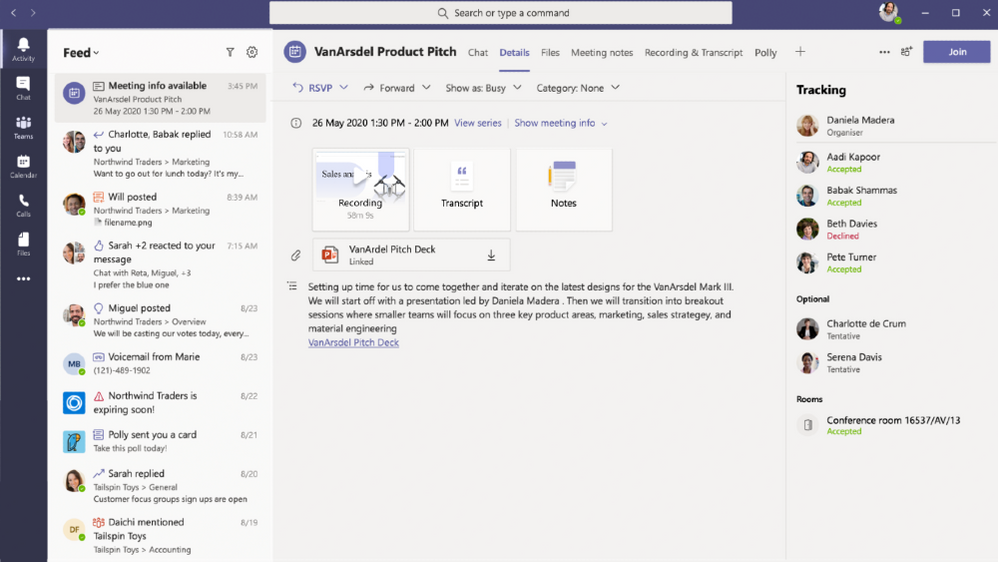 Coming early next year, you’ll have a new category of devices gracing Microsoft Teams! These new panels from Crestron and Yealink can be mounted outside of any meeting space to give colleagues the ability to view spaces, view meeting details, reserve spaces, and view upcoming reservations. Also, they’ll be able to view the building floor plan and book other rooms using the “Nearby Rooms” feature.

Coming later this calendar year, you can expect to see some changes to your calling experience within Microsoft Teams. Microsoft will be simplifying things by showing a more streamlined view of your contacts, voicemails, and calling history all at once. This will give you the ability to quickly initiate or return calls with just a single click! 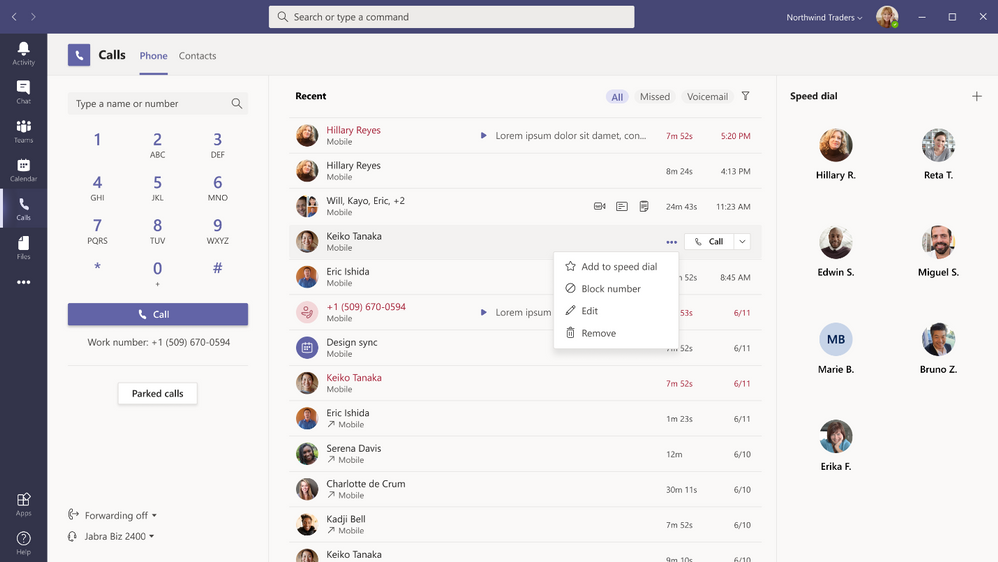 With this latest calling enhancement, you will now be able to connect a call queue to a channel in Teams! This allows you to collaborate and share info within the track while taking calls in the queue. Teams admins can also connect the call queues to specific channels so team owners can manage the settings. 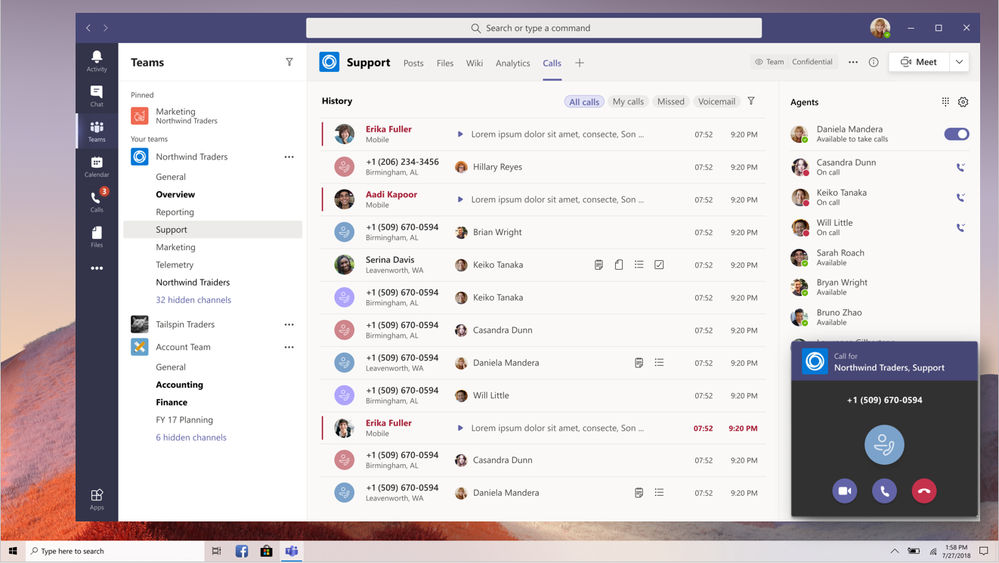 Starting October 1st, Microsoft is expanding its list of Microsoft Calling Plan countries. The following countries are being added to its overall list: Austria, Denmark, Italy, Portugal, Sweden, and Switzerland. You can learn more about the country and regional availability for both Audio Conferencing and Calling Plans here.

Another highly anticipated feature revolves around templatizing your Teams! With the latest general availability release of Teams templates, you can choose from common business scenarios to build out your Team. Each template will come with a pre-defined set of channels, apps, and guidance. In addition, the administrator will have the ability to create custom templates for your organization. This was quickly my biggest gripe with Teams templates in the past, so I can’t express how happy I am to see this latest addition to Teams templates! Customizing the Teams templates will allow you to standardize on your team structures, surface relevant apps, and scale to your organization’s best practices. You can find out more about Teams templates here.

You may have noticed some slight changes to your Teams client lately. Microsoft recently pushed out an update, which includes a channel info pane that summarizes active members, important pinned posts, and other relevant info in each channel. You may have also noticed what some people refer to as the “Boomer Button,” aka the “New Conversation” button at the bottom of each channel. Many people (myself included) thought starting a new conversation was relatively easy to find. Microsoft is making it even easier to find the option to create a recent channel conversation by making it a big purple button at the bottom of your channel! Is it a little overboard, maybe, but at least you’ll always know where to go to start a new channel conversation! 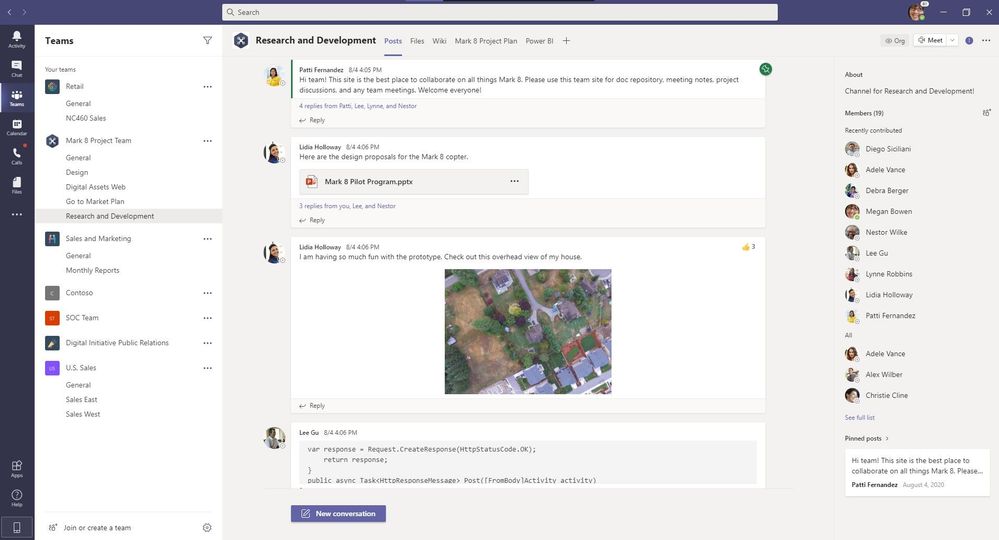 Microsoft will be overhauling its Search experience by leveraging Microsoft Search to help you find messages, people, answers, and files faster than ever! This redesigned search will provide a more intuitive experience while only giving you relevant results based on the people and content you engage with most in Teams and other Microsoft 365 services. 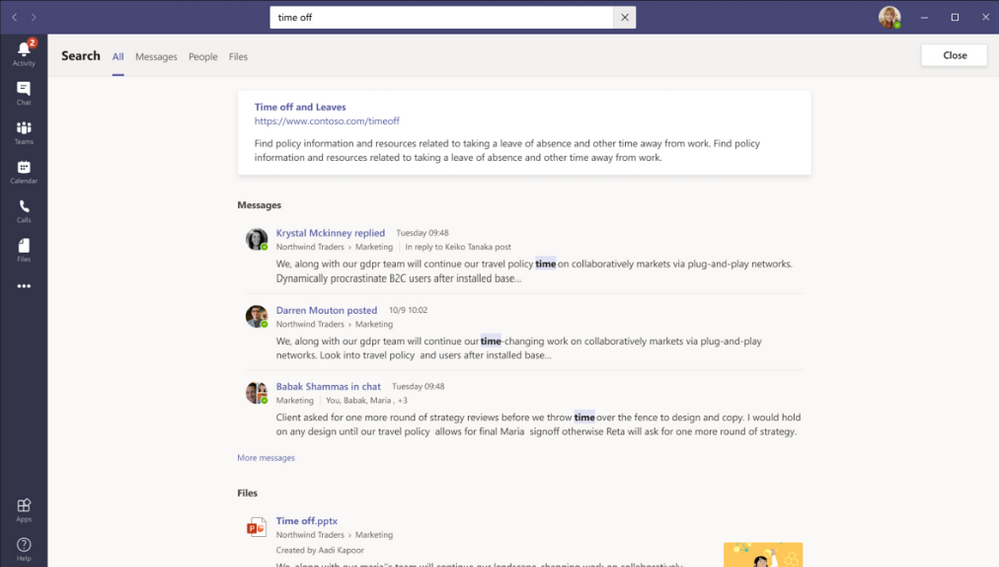 Earlier this month, Microsoft released the Microsoft Lists app in Teams. Lists help you track info and organize your work all within a simple to use the app. The latest enhancement to Lists just brings this whole experience into Teams as a channel tab.

Bring your Intranet directly into Teams with the new home site app in Teams! With the integration of the SharePoint home site in Teams, your colleagues can easily access your Intranet without even leaving Teams! With customizable naming, branding, and multi-level navigation to teams, communities, and other resources, what’s not to love!? You can start pinning this app to your app bar in Teams later this year! 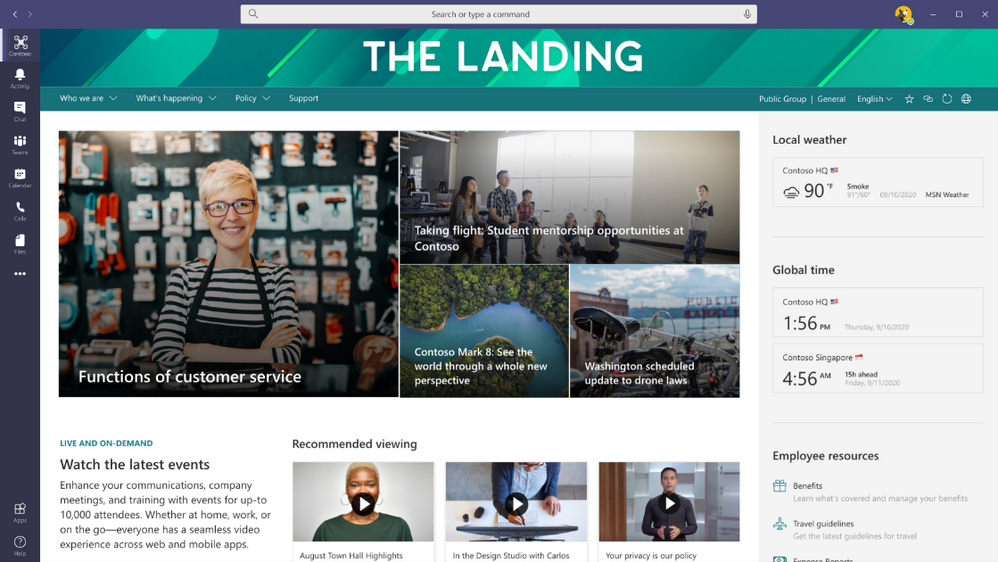 For those of you in the healthcare field, you’ll be happy to hear that Microsoft has released a new EHR connector as a telehealth offering. This new connector allows clinicians and patients to launch a virtual patient visit/consult another provider in Teams directly from the EHR system. One of the largest EHR systems, Epic, will be the first to integrate with Teams, and Teams will be available in the Epic App Orchard later this year.  You can expect other EHR system integration soon!

Customer Key support is coming to Microsoft Teams! Now you’ll be able to keep data safe by adding a layer of encryption using your own keys for Teams. This is very similar to the offerings in Exchange Online, SharePoint Online, and OneDrive, and you can expect to see this in public preview before the end of the year!

Available for public preview now, the Teams Export API allows you to export Teams messages (both 1:1 and group chat) along with attachments (file links and stickers), emojis, GIFs, and user @Mentions. For many, the Enterprise Information Archiving (EIA) for Temas is critical for organizations. It meets retention, indexing, eDiscovery, classification, and regulatory requirements, and this API will only help make things more easily digestible. You can learn more about the API here.

We’ve only just scratched the surface on all of the updates announced at Ignite. However, these were the updates I found most important for consumers! I will have a separate blog coming out shortly on the latest Teams management enhancements announced at Ignite, so I encourage you to check back soon if you’re an M365/Teams administrator! I hope you have found this blog helpful, and I hope everyone is staying happy, healthy, and safe out there!