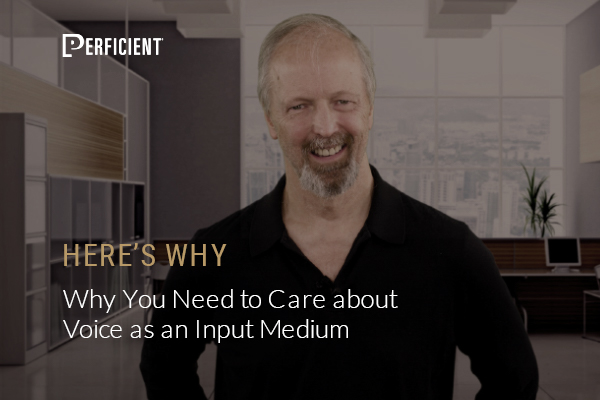 Search industry has been talking about the hype of voice search for years. But what actually is the reality of voice usage today?

In this episode of the award-winning  Here’s Why digital marketing video series, Eric Enge reveals some insights from our fourth annual survey of voice usage and predicts when the voice revolution will actually happen.

Hi, everybody. Eric Enge, Principal with the Digital Marketing Solutions Business unit at Perficient here. I’m here to talk to you about voice usage.

For years we listened to all the hype about voice. It was easy to buy into because the hype was so compelling, but what actually is the reality of voice usage today and what will it take to make it truly pervasive? To back that up, we’ve just completed our fourth annual survey of voice usage. This has given us new data on actual levels of usage by users. So, let’s dig in.

First, let’s look at how users look up information on their smartphone. You can look at the screen and see that now. 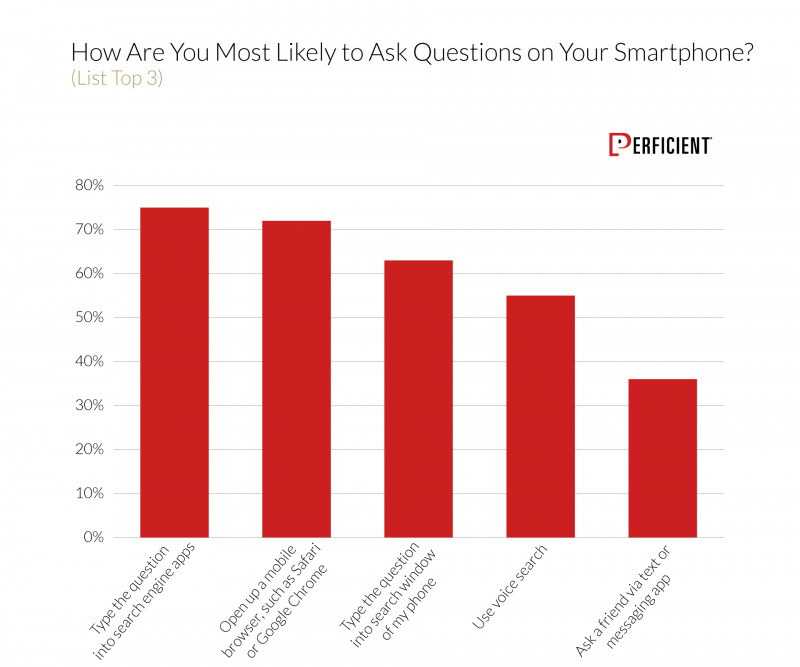 We asked users to pick their top three choices for how they typically do that. As you can see on the screen, voice came in fourth behind search engine applications, opening a browser, or typing the question into the search window on your phone. Still, 55% of users listed voice as one of their top 3 choices.

This suggests that they’re using it at least some of the time, but how often?

To get to that, we asked them how often they searched for information using a smart speaker. 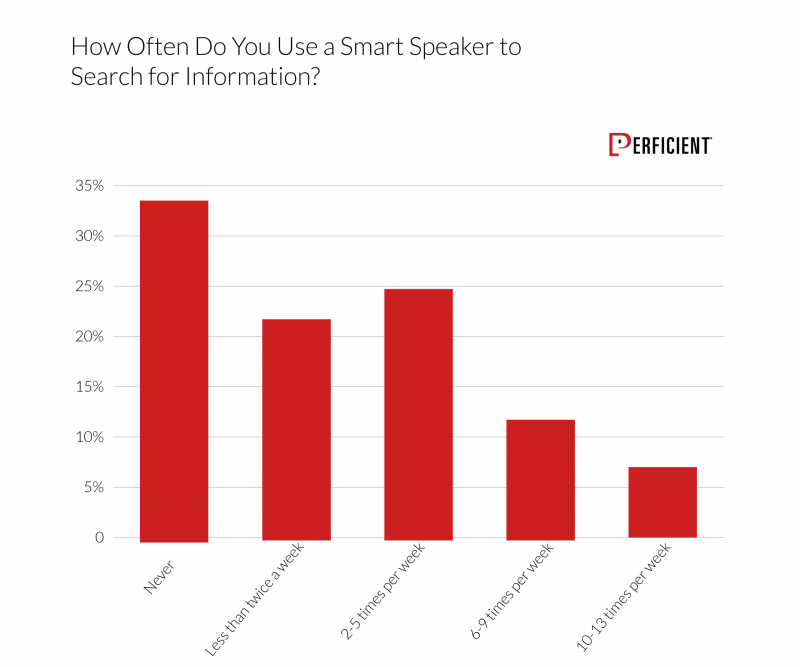 34% said never, 22% said less than twice per week, and only 19% said that they do so 6 or more times per week. So, if you think about those numbers, that’s not a ton of searching for information on those devices.

In fact, not too long ago, I wrote an article for Search Engine Land which shows that most of what people use smart speakers for are command and control applications such as “set a timer” or “turn on the living room lights,” and those aren’t examples of search.

It’s also clear that people feel frustrated when a personal system doesn’t recognize what they said. 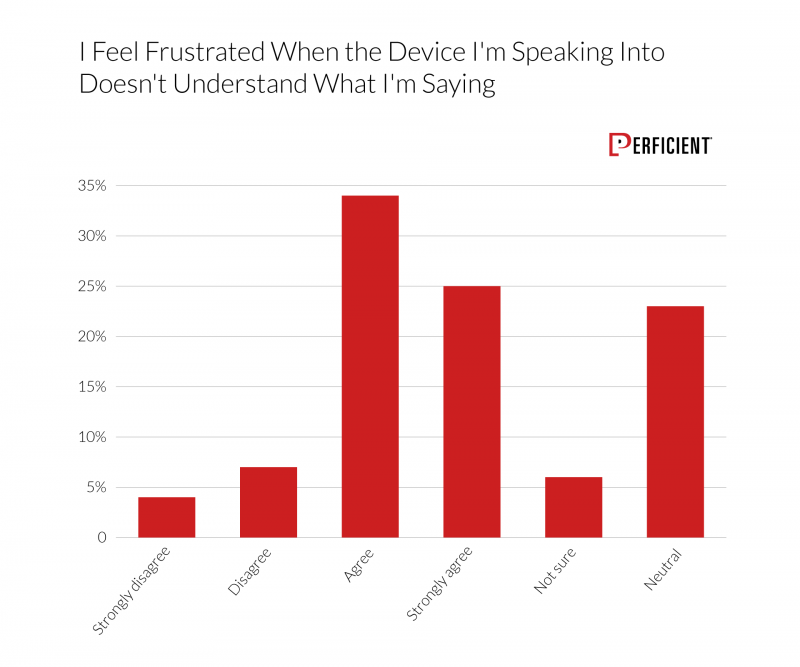 59% of our participants said that they agreed or strongly agreed with that sentiment. And more than a third said that this lowers their usage of voice with their device.

Wrong answers, by the way, are even worse. When the device gives you a wrong answer, 41% of people said that lowers their usage. 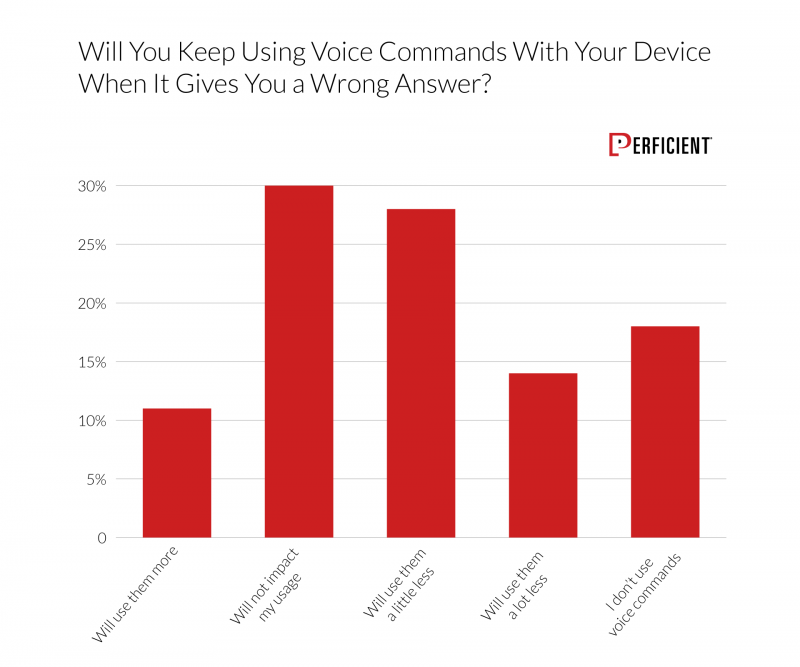 So, we need to see improvements in natural language processing — that’s kind of the upshot of all this. Once machines can process complex speed patterns the way humans can, that’s when the real voice revolution will unfold. And then we can imagine speech interactions like this one:

“Hey, Google, I want a pair of basketball sneakers in size 10.5, wide foot, high top, and let’s make the color black. Yes, I forgot to say, please get those via my smile.amazon.com account. Hang on a second.

Honey, can you get the person at the door, there’s someone there.

Ah, Google, sorry about that. So, let’s see, where was I? Oh, yes. Make them Air Jordans actually, and bill them to my usual credit card and ship them to my home address. And can you confirm the price for me?”

“Oh, that sounds great. Thanks, Google!”

So, you see what’s going on there is rather than navigating a website where you go step by step, I was allowed to be stream of consciousness, Google was able in my sample here to unpack the entire conversation and handle it. That’s the kind of thing that needs to happen before the voice revolution will really hit its full stride.

In the meantime, there are lots of ways that you can use voice and potentially leverage voice — you just have to be a little bit more selective about what you’re doing.