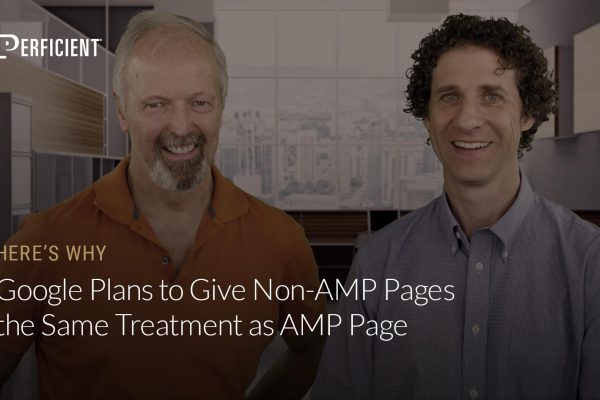 Implementing Google AMP can be a challenging task for many web developers. Great news! Google is working on a project that allows non-AMP pages to be treated like AMP Pages.

In this episode of the award-winning Here’s Why digital marketing video series, Ben Morss joins Eric Enge to give some insights on the work Google has been doing to help non-AMP pages get the same treatment as AMP Pages in Google SERP.

Eric: Hey, everybody. Eric Enge here. Pleased to be here today with Google’s Ben Morss. He’s a developer advocate who works on AMP and PWAs and other things to make the web wonderfully fast and powerful. Thanks for joining us today, Ben.

Ben: Thanks for having me.
Eric: Absolutely. So, Ben, we’ve seen some posts out there suggesting that Google is working on ways to bring the benefits of AMP to web pages that aren’t coded in AMP. What’s up with that?
Ben: That’s weird, isn’t it? Yes, because AMP wants to preserve AMP being special. Actually, that really isn’t true. The folks that make AMP and that invented AMP don’t really think you have to use AMP to make things fast, it’s just easier to use AMP. So, they’ve thought all along that it’s actually better if any pages that follow AMP’s guidelines for speed, reliability, layout stability, and so on should get the same treatment in Google Search as AMP pages do. Plus, there are those who complain that AMP is a different version of the web, and AMP is maybe a thing they don’t want to use in some cases. It makes total sense. So, this has been worked on for quite a while. As you mentioned, there have been a couple of public posts about this. The first one was in March of 2018. So, as we’re filming this now, a year and nine months later, this has been ongoing for a little while. And the post was by Malte Ubl, the person who created AMP in the first place, the coder who really made it what it was. He said a couple of things. One is that they’re working on web standards, so ways to do things on the web that would allow things that were not AMP, the kinds of fast-loading experiences that AMP allows. And number two, hoping that this work would allow Google Search to apply special features like the AMP Carousel, the AMP Top Stories Carousel, to non-AMP pages as well, maybe more than that. That was all that it said. It was mysterious.

Eric: So, what’s interesting about that, and I know you probably can’t comment, but it suggests to me that one of the big payoffs is that those pages would be able to get into Google cache.

Ben: I can just say that people here do think that there are various ways to make it a fast page. I found in my work with various companies that it’s hard to do it, it’s hard to make a fast page because people lack the discipline to do it. Someone will add more JavaScript to the page, add more large images. AMP makes it easier to not fall into these traps, but AMP can also be restrictive too. So, if you don’t have to use AMP at all and it’s an option, it seems a lot nicer than having to use AMP to get these special Google Search features.

Ben: There was a follow-up on this because work has been ongoing. And there’s feverish work here. People are skirting around like busy bees working on all these things. And a lot of progress has been made. Nothing has changed in Google Search yet, but I would expect that at some point, sometime in the future, not too long, you may see some things happening in Google Search. But Search is very secretive so we can’t say what’s going to happen – plus they’re still working on it. But what the post said was that they’re working on speed metrics. So, ways to measure accurately, and in some way that’s identifiable with everybody, how fast the page loads for a user. And they’re considering different metrics with names like First Contentful Paint, Largest Contentful Paint, and First Input Delay. They’re also discussing a new thing called Layout Stability, which I think is public and available that will measure the kinds of things like when your page is loading up, things shift around on the page as they load. AMP tries to make sure that things don’t move around as the image or an ad loads in – that things don’t shift around to make room for it.

If things shift around the page, it frustrates users. They’re going to measure that kind of thing as well. They’re working on various metrics like that. They’re working on various ways to do what they call instant loading, which means to make things load very fast from search – and also, interestingly enough, on new ways to navigate from web pages to web pages. So, since web began, it’s been a thing where you get the web page, click on a hyperlink, load a new page, and everything vanishes for a little bit and reappears. What if there are smoother ways to do that? Interesting. So, various things like this are being worked on. And much of the work – actually web standards are public, and some things are just kind of search things.

Ben is a Developer Advocate at Google, where he’s working to help the Web be faster and more beautiful. Prior to Google, he worked at the New York Times and AOL, and before that he was a full-time musician. He earned a BA in Computer Science at Harvard and a PhD in Music at the University of California. Rumor is that he still runs a band called Ancient Babies.