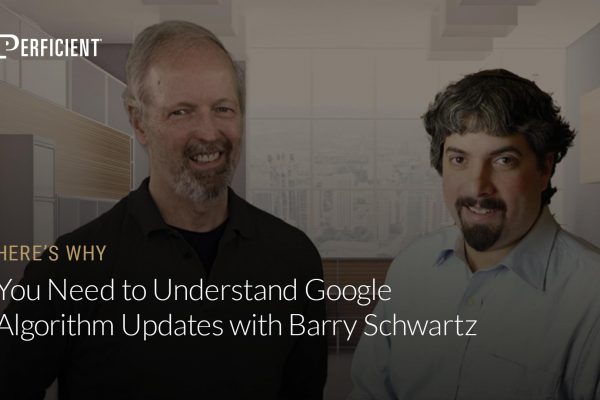 Google makes numerous search algorithm updates each year. Those updates may affect our sites’ ranking one way or the other. But do we really know how?

In this episode of the award-winning Here’s Why digital marketing video series,  Barry Schwartz, Search Engine Land’s News Editor, together with Eric Enge, explains different kinds of Google updates and why it is really important that you understand Google’s algorithm updates.

Eric: Hi everybody, Eric Enge here, and I’m really pleased to have Barry Schwartz with me today. We are going to talk about search algorithm updates. Say hi, Barry.

Eric: Well done. Thank you for the ritual stupid joke. That’s a good way to start this off. But anyway, since we’re going to talk about algorithm updates, why don’t we talk for a moment about some of the moldy oldies: Penguin and Panda. How do core updates differ from those kinds of algorithms?

Barry: I think it’s easy when you look at the Penguin algorithm—it was more focused on links, where you don’t really think or most people aren’t saying that these core algorithms are link-focused.

Panda was more about the site’s content being something that you could trust: is it authoritative? It’s going back to that list of like 23 questions that we all went ahead and posted back when people wanted answers of, “What they should do to fix their sites” around the Panda update. Most people are comparing the Panda algorithm, which is now built into the core algorithm, according to Google, related to the core algorithm, where everybody’s talking about, “Is this site trustworthy?,” “Is the site content something that people would stand behind?” I think when you look at Panda, it’s probably more related to these core updates. I think it’s just terminologies Google is using in order to basically say, “Hey, we’re not really confirming updates but yeah, we did an update to our core algorithm,” this way they don’t have to come up with new names every day around Fred or Florida or whatever you wanna call these updates.

Eric: Well the Fred name was your fault, right?

Eric: Yes, but you’ve spurred him into doing that. Putting that aside for a moment, the Penguin algorithms are actually still around, right? They’re just incorporated in the core algorithm now.

Barry: Both are incorporated?

Barry: Penguin is definitely real-time. Panda is less real-time, according to the last update, but we’re not really getting any information from Google in the past couple years about Panda or Penguin. I think they just stopped updating them or they’ve just embedded them into the core algorithm and it’s Google’s way of not talking about them. They just say, “Yes, it’s a core update.” That’s it; we don’t know much about it now.

Eric: Given that you’re sort of like a journalist for the industry, I think a really good question to ask you is, “What do you see that SEOs are typically doing in response to updates?”

Barry: Most SEOs that are talking about these core updates are looking at the site as a whole and saying, “What could I do to this site in order to improve it, from a user perspective?” Making the site’s user experience better, making the content better, making it just appear that the site’s more trustworthy, authoritative and around the E-A-T topic, and a lot of SEOs that I’m talking to are looking at things around, “Are the authors that are writing this blog post or the authors writing about this evergreen content someone that has the experience and history behind them to actually go ahead and say, ‘Yeah, this is actually authoritative content written by an expert on the topic, as opposed to just some low-level bloggers regurgitating whatever John Mueller says on an SEO blog called Search Engine Roundtable?'”

Eric: Right. I think that’s good advice in general, and there is that low-level blog called Search Engine Roundtable, I understand, but actually I think the guy who writes on that is pretty good, so maybe you ought to read it. But with this whole idea of the quality of the content you’re creating, and having the right expertise behind the writing, I think is a really good one. I think that’s a good area for people to focus

Barry: I just had a meeting with somebody on a high level, just talking about their website, and they’re like, “Should we invest time and effort into our content?” I’m like, “Yes of course.” Even so, you should even invest in building the personalities of your employees through the content of your website, because that’s not going to hurt you, it might help you. If you believe everything around what people are saying around content and authority and stuff like that, that definitely will help Google, but it also might help you get more publicity on news channels. You might be interviewed by CNN or Fox or think to extremes, or you might get on CNBC about a specific topic or be interviewed in some journal that’s related to your topic. It just helps you overall by going ahead and investing in your people and making sure that they shine around your brand.

Eric: Right, and creating that sense of connection with your target audience and understanding the target audience perspective and all that is incredibly important, so I agree with you there.

Eric: Let’s go back 11 months, to last August. We had an update and it got called the Medic update. I think that was your fault too, actually, if I’m not mistaken.

Eric: I’m trying to blame you for a lot of algorithm names. Can you talk a little bit about the Medic update? And what’s Y-M-Y-L or YMYL, for short?

Barry: YMYL. I am to blame for the Medic update name. I did a survey. It was a core update, of course. Google didn’t call them core updates before that; they were…Google wasn’t naming any updates then. People were calling these Phantom updates. I don’t know if you remember them; they called them Phantom updates. I did a survey asking people submit your sites and tell me if you were hit, and I collected like hundreds and hundreds of websites.

One pattern across all those websites was they were kind of medical-focused. Some of it was like health or wellness, some of it was like selling drugs and prescriptions, some of it was anything around health and medical, and maybe even herbal stuff. Like anything around that topic—it could be ecommerce-related, focusing on selling the stuff. It could be bloggers talking about how to do better at it, and it was that pattern there and I would say, like 60% to 70% of the sites that people submitted were all in that topic. There was a huge chunk on financial, there was a huge chunk around this concept of YMYL, but because it was really, I mean the sites, it was literally like almost 70% of the sites were medical focused. I’m like, I’m going to go ahead and name this the Medical update.

Obviously that caused a lot of controversy because somebody’s like, “Oh, I got hit and I’m a site that is on investing and stuff like that.” And then obviously the scope got broader and Google said, “No, it didn’t only impact medical sites.” Because when you say something that’s wrong, Google then says we have to…sometimes they say we have to go ahead and talk about it, because this person’s spewing information that’s incorrect. So as I spewed information that was incorrect, calling it the Medic update, Google went ahead and said, “No, it’s broader than that.” It didn’t just impact the medical space, and I’m glad Google did that, and now people are talking about YMYL (Your Money, Your Life) and that’s obviously broader, whereas talking just about medical things, that is within the realm of Your Money, Your Life. It’s also about your future, your financial future and stuff like that. And Google, I think, recently has even talked about how they do have algorithms that specifically look at topics and sectors that say, “Alright, if it’s on the YMYL basis, financial future stuff, medical health-related stuff, they need to make sure the content they’re showing in the top search results are authoritative and trustworthy,” because they don’t want to lead somebody to go ahead and read a medical website that’s completely spewing fake information.

Barry: I mean that’s why people are talking about this YMYL, which is in the actual Google quality raters guidelines, which is a whole another topic. I don’t know if you want to get into that or not.

Eric: Actually, one last thing we just want to touch base on you mentioned earlier: E-A-T, which is an acronym for Expertise Authority and Trust. I had to remember what it was. I’m supposed to know, I think. It seems to me that this is a really valid concept, but I also think it’s being talked about to excess, to a degree, and there’s a lot more to think about than just E-A-T, especially the way that Google means it.

Barry: Yes, it’s interesting. I agree it’s being talked about to a certain extent, but at the same time I kind of think Google’s okay with it. Meaning that back in the old days, when we used to talk about link building and PageRank and things that were really very—they didn’t really mean much in terms of building a better website—it was all about manipulating Google’s rankings. Google always said don’t talk about it; don’t worry about PageRank, it’s not important. It took them years and years to get rid of that. And now, I think Google’s just sitting back and saying, “Yay, people are talking about building more authoritative websites and building better trustworthy websites.” It’s a win-win for them. Of course, how do you go ahead and measure that?

Now people are talking about their Better Business Bureau ratings or trust symbols on websites and using authorship again; all these other things that are the minutia of this information. I think Google’s sitting back and saying, “Yeah this is okay. I don’t mind if people go ahead and talk about E-A-T. I don’t mind that people go ahead and talk about YMYL.” Ultimately, it’s leading to people building better websites. Of course, people then and go ahead and say, “Oh, we need more links; we need more trust seals on our websites.” That could be a little bit disconcerting, but overall, I don’t think it hurts for people to obsess about making a site that’s more authoritative or trustworthy or that contains expertise on a specific topic. I think we’re better off

Eric: Right. At the end of the day just getting back to creating content that users really value and respond to is what we should try to take out of the whole E-A-T thing.

Eric: Great. Thanks for joining us today, Barry; really appreciate it.

Barry: Thanks for having me. I appreciate it.