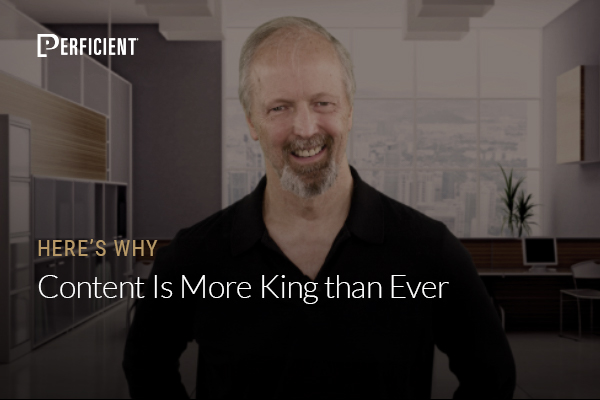 Content is king. It’s still king and it hasn’t really changed. And today, I’m going to show you three case studies that will show you that content is more king than it’s ever been.

Don’t miss a single episode of Here’s Why, click the subscribe button below to be notified via email each time a new video is published.

Content is king. It’s still king and it hasn’t really changed. And today, I’m going to show you three case studies that will show you that content is more king than it’s ever been.
I’m going to start though by talking a little bit about Google’s algorithm updates over the past 14-16 months. I’m currently showing a chart for you that shows all the major updates that were called “core algorithm updates” by Google. 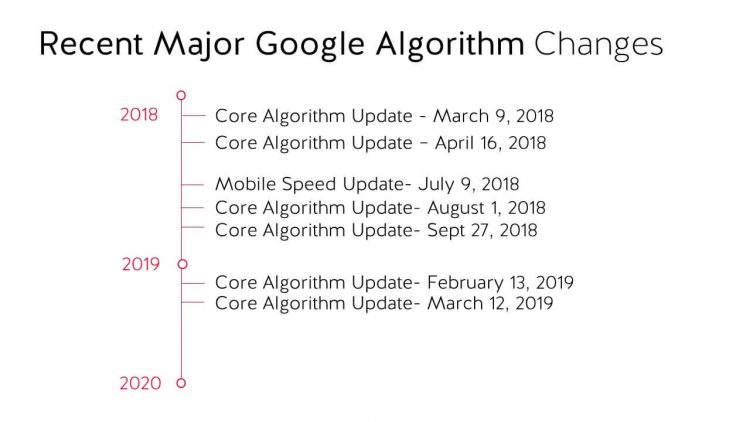 It turns out that these updates all had a certain number of things in common. There seemed to be a pretty big focus on user intent and better understanding of user intent. They were looking to lower the rankings of poorer quality content and raise the rankings of higher quality content. But another element of it that I felt really emerged is a much bigger emphasis on the depth and breadth of your content. So, with that in mind, I want to jump into the case studies and show you some data.

Here’s the first case study. This is in the addiction marketplace. The first chart shows the publishing volume of one particular vendor in that marketplace. 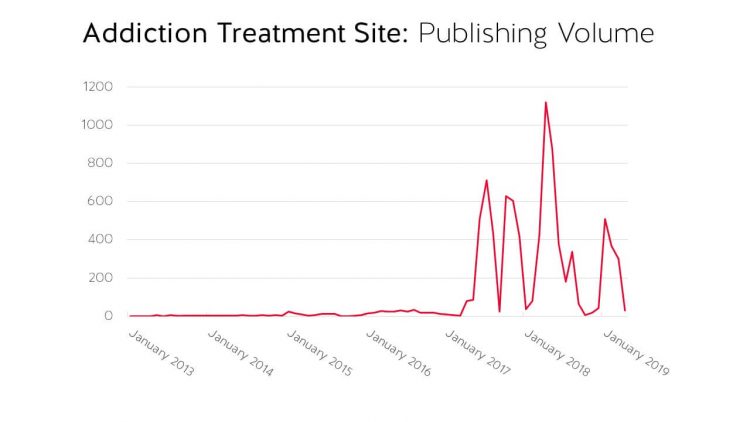 You can see that there are wild fluctuations, but at times we’re talking about hundreds of actual new pieces of content being published every month, some months as high as 700. So, that’s the first data point.

Second data point: Let’s look at the rate at which this site was adding links, that you see in this chart here. 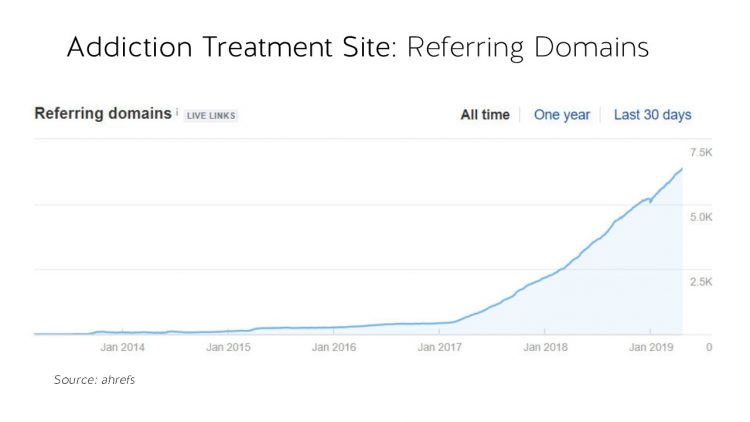 The linked volume begins to grow rapidly around the same time as the content volume started growing.

And now for our third chart. This is the SEO visibility from Searchmetrics. You see that that begins to accelerate rapidly in May of 2017. So, it’s very interesting to see the correlation between the rapid content growth, the rapid linked growth, and how it drove massive changes in traffic to this particular site. 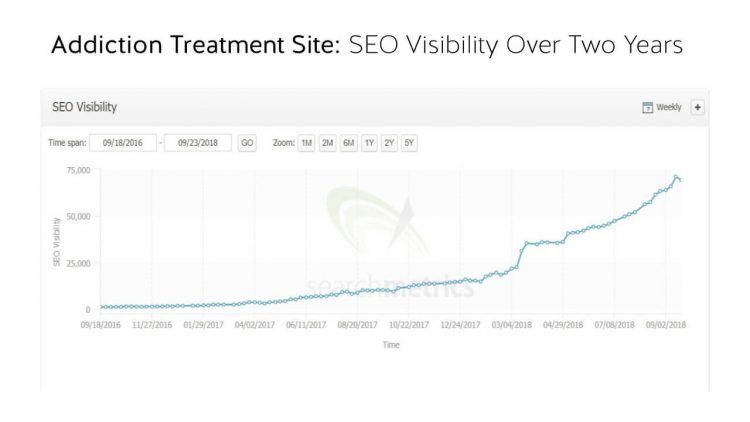 Now let’s look at case study two. This one’s in the career space. And again, I’m going to start with a chart on the publishing volume for this particular company. 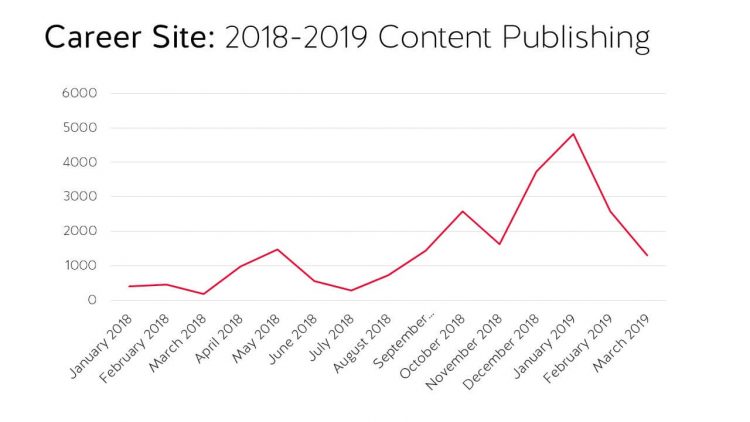 The volume was actually moderately heavy in 2017, running about 45ish pieces of content a month. That’s pretty significant—one and a half pieces a day on average. But in January of 2018, this scaled into many hundreds of pieces of content per month. So, now let’s look at the “rate of links added” chart for this particular company.

Here you see that the links did not really scale until you got into around March and April of 2018, when it has a really sharp spike. 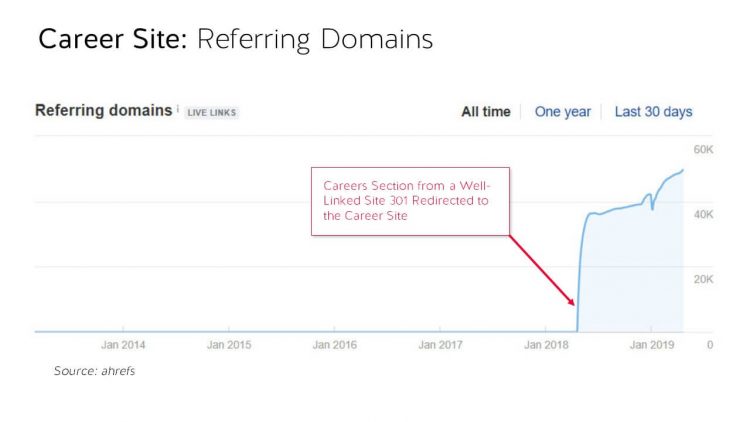 Now, what that sharp spike is actually showing us is: it turns out that that was due to a redirect of another domain to this particular domain, and so a lot of links transferred very instantaneously, if you will.

Let’s look at the traffic chart for this particular company. The traffic actually scaled very rapidly after the links took off in May of 2018. 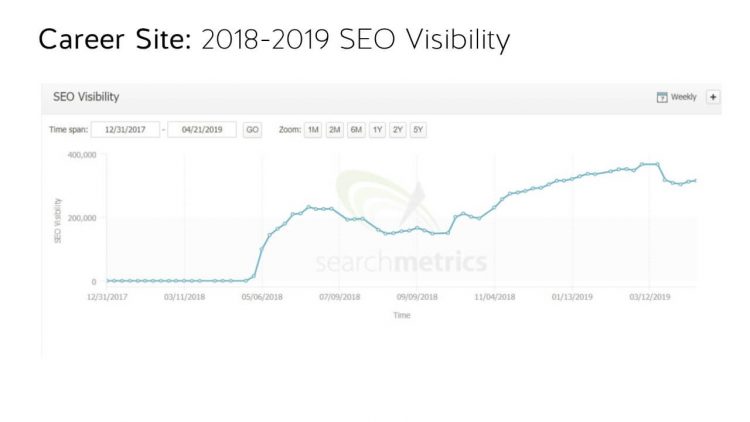 What I like about this case study is that it shows us that the content publishing at a volume where the links aren’t really growing isn’t going to do much for you. You need to create lots of great content. It’s a key part of the picture, but if you don’t promote it effectively, you’re not going to get the right results.

Let’s look at case study number three. This one is a consumer retail sales site. Let’s start with the publishing volume chart. 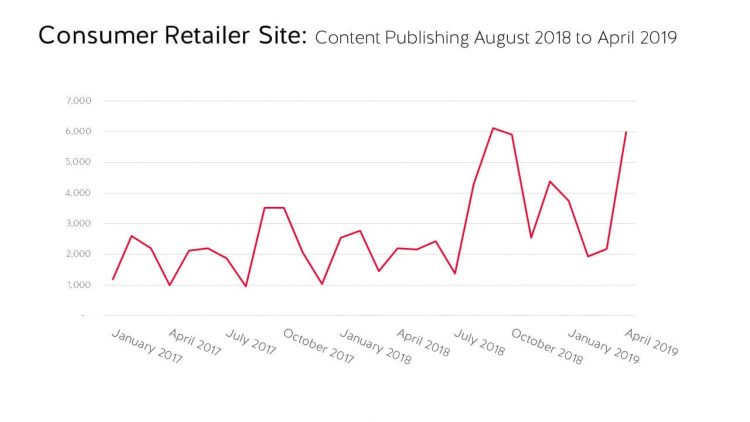 This site has been adding content at a heavy volume for a very sustained period of time—it’s consistently in the thousands per month.
Now let’s look at the rate of links added for this chart. This doesn’t have as sharp a spike as the second example I showed, or even as dramatic growth as the first example. 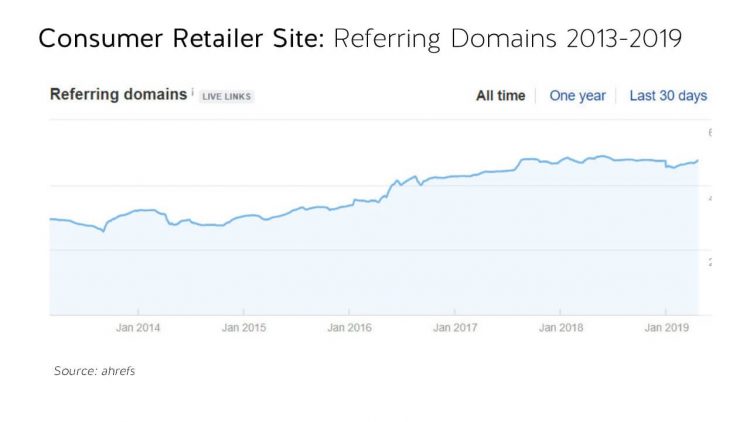 Yet you do see that links are being added steadily over time built on top of a very strong base.

Now let’s look at the traffic for this one. This is actually the SEO visibility chart again from Searchmetrics.

In this particular case, the SEO visibility started at a very high level, but you get continuous steady growth over time, as supported by the strength of their publishing program and the rates at which they’re adding links.

I have two more charts for you before we wrap up.

This chart is data from a company called serpIQ that shows the correlation between ranking in Google and length of content. 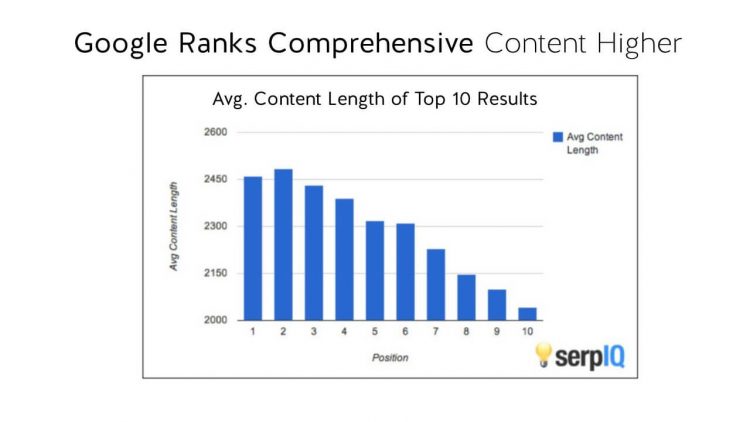 You’ll see from this chart there’s a clear bias for Google to rank longer form content. Now, before we go off and say that every page should have tons of content on it, it’s very dependent on the context. There are plenty of pages where you don’t need a long-form article. I’m not saying every piece of content or every page on your site needs to have a mass of text on it. That’s not the point. But from the point of view of informational content, it’s very clear that longer form is better

And then another chart. This one’s from HubSpot. This data shows that longer form content actually earns more links. 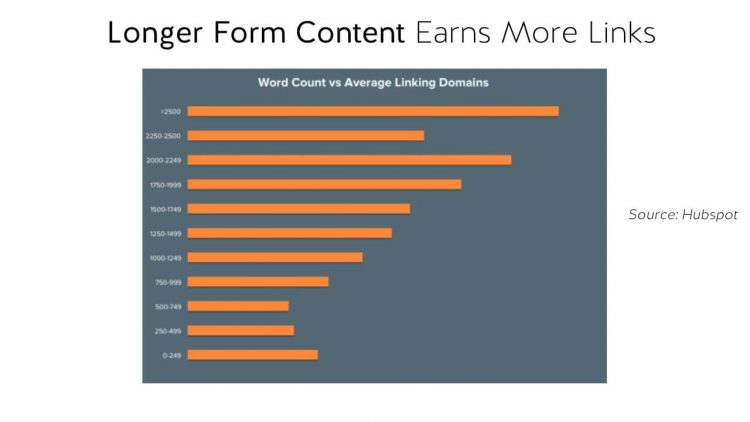 Now you can see how I’m making the connection here and drawing all the pieces together.

One last chart. This one’s a bonus chart from a Perficient Digital study that we published on links as a ranking factor. In this chart, you can see that Google ranks content with more links higher based on a normalized link score that we created. 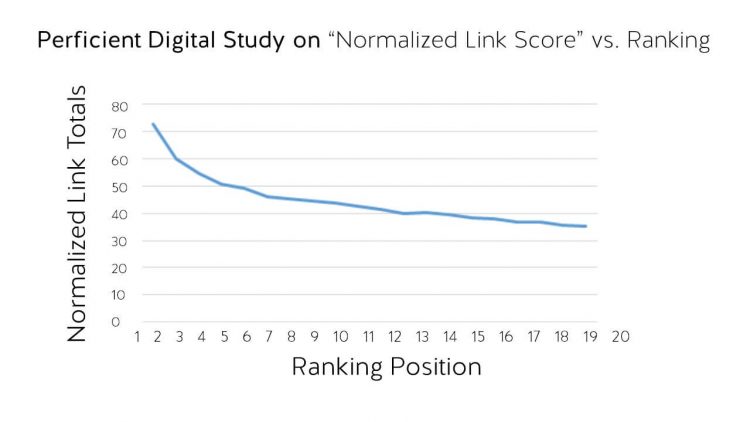 Look at the three pieces: longer form content ranks higher, longer form content gets more links, sites with more links rank higher. These three things are all tied very, very closely together. The reason why content is king is that you’re not going to get the links if you don’t have the right content to earn them. So, content is indeed more king than ever.