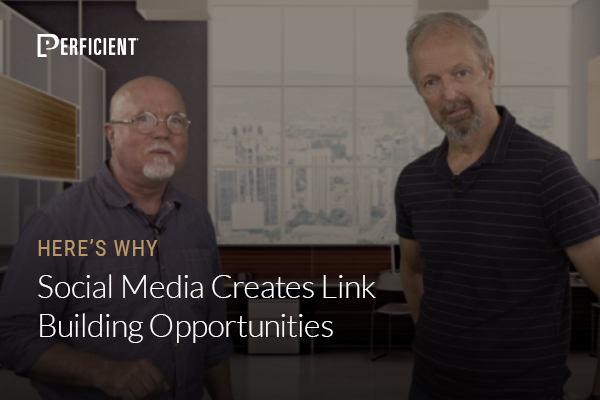 Unfortunately, search engines don’t put much weight on social media as a provider of reliable ranking signals. But that doesn’t mean social media isn’t important to your SEO strategy.

In this episode of the popular Here’s Why digital marketing video series, Mark Traphagen explains how to use social media to increase your chances of earning natural links to your content page. This is part one in a three-part series on social media and SEO.

Eric: Mark, as we kick off this series on how social media can boost SEO, let’s ask the big question first. Do social media engagement metrics and links directly impact SEO?
Mark: The short answer to that is no.
There are reasons behind that, and those reasons really lead me (and I think they’ve led you as well) to believe that Google is telling the truth when they emphatically state, as they have for years, that they don’t use social as a signal.
Now, what are some of those reasons?

Eric: If links and social media posts aren’t direct ranking signals, why do you say social media can still be an effective link building strategy?
Mark: Sites won’t link to content they’ve never seen, right? And social media is still an effective way to promote your content. You need to get it seen? Use social media to get it seen.
That doesn’t mean just posting randomly in social media. There’s the importance of building the right audience. You want an audience that matters to you. You want to use paid social to target people like journalists, bloggers, other media figures, and influencers who when they see your content might see it as the kind of thing they want to share with their audiences, again increasing the opportunities for links.
Eric: Got it. So, what are some specific things people should do then on social media to increase their chances of earning links to their content?
Mark:

Eric: Thanks, Mark. Watch for parts two and three of this series on how social media can boost your SEO.