Why Featured Snippets Churn So Much – Here’s Why #185

Mark can’t decide which yogurt is best, so he’s testing them all. In similar fashion, Google has to do a lot of testing to decide which source makes the best featured snippet for a given query.

In this episode of the popular Here’s Why digital marketing video series, Eric Enge reveals the results of his fascinating study showing how much Google churns the sources for its featured snippets in search.

Mark: Eric, tell the viewers what we did in our latest featured snippet study.

Eric: Happy to. We were interested in measuring how frequently Google changes featured snippets. To do that, we got together with the team at STAT Search Analytics to see if we could use their data to help measure it, because they have an awesome tool for this. We took 5,000 keywords that we had shown featured snippets in previous studies that we did on the topic, and we checked them with the STAT Tool for 124 straight days on both mobile and desktop.

Mark: And what did we see?

Eric: What we saw was really interesting. One of the first findings is, even though we started with 5,000 queries that we knew had historically shown featured snippets before, 522 of those queries didn’t show any at all during the 124 days of the new study. But we also saw lots of queries that were very stable, if they had featured snippets for the entire time. That happened for about 2,200 of the 5,000 queries, on desktop that is. And on the mobile side, about 1,275. 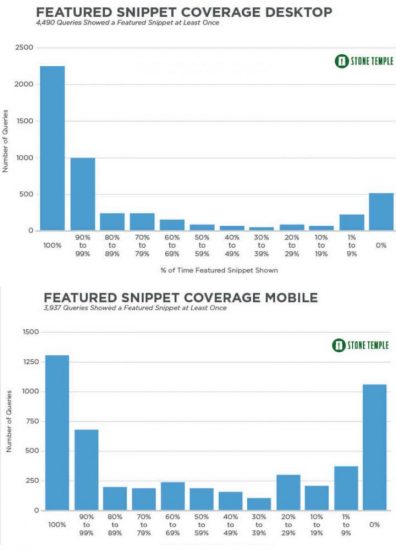 However, and here is where it gets really interesting, we saw many that changed very, very frequently. For one keyword, “What is day student tuition?” we saw 12 different sites that Google used to show a featured snippet during the test period, and eight days that had no featured snippet at all. So, there is a high amount of what I call churn, or thrashing if you will. It’s just amazing how quickly they’re turning all this stuff over. 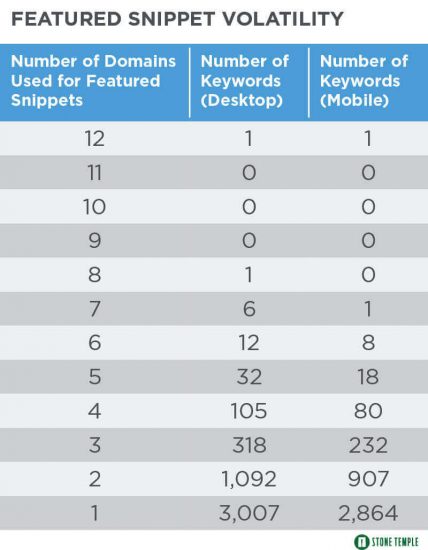 [Tweet “Google continues to churn sites used as sources for featured snippets for a lot of queries.”]

Also, Wikipedia was the number one provider, showing up for 40% of all the featured snippets on desktop and about 35% on mobile. The top 10 sites accounted for only 47% of all featured snippets, however. Even the next nine sites were only another 7%, which tells you that there’s a long spread of a lot of other domains for the rest of these. 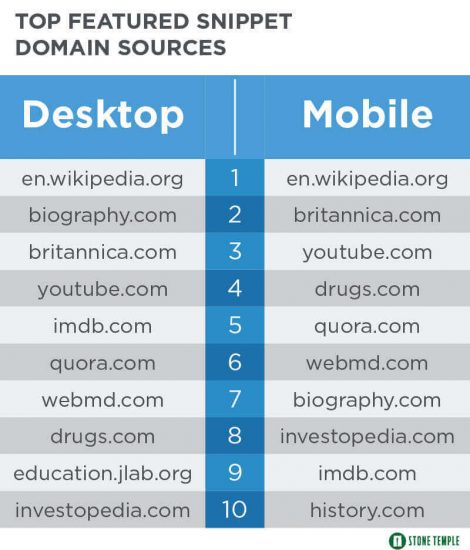 Mark: Were there any significant differences between mobile and desktop?

Eric: There sure were some interesting findings there too. First of all, mobile tended to show more videos than desktop, which is interesting by itself.

Mark: What does this mean for webmasters and site publishers?

Eric: First of all, featured snippets remain incredibly important, and you just have to learn how to obtain them. You have to make that part of your business. We have tons of data that shows that you get traffic increases from doing this, and you need to know that Google is doing a lot of dynamic testing, so you have to expect this to be volatile. You might succeed in getting a featured snippet and then you’ll lose it. But Google isn’t investing all this energy unless it’s incredibly important.

I’ve said it before, and I know other people out there are saying it too, one of the reasons why featured snippets are so important is they play an important role in voice environments. So, if someone does a voice query, and Google wants to be able to give that right first answer, then the whole featured snippet thing is about a whole new algorithm that Google is using to get to that perfect first right answer. In the voice environment, if you’re not that perfect right answer, you’re just out of the picture. So that’s another reason why it’s really important to get it.

But even if you do all of these, the interesting thing that I want people to think about, Mark, is it’s actually Google giving you clues on how to make your content better. Put aside Google for a moment; you’d probably want access to a tool that could help you learn how to make your content better for potential visitors to your site. So that’s a whole other reason to do featured snippets.
Altogether, to me, all of these things are such huge opportunities. You’ve just got to go do it.

Mark: Thank you, Eric. That’s really fascinating. And, you know, as Eric alluded to toward the end there, the value of some of these studies that we do, like this one, is that it not only gives you details about, in this case, featured snippets and knowledge graph results and things like that, and mobile versus desktop, but overall to how Google thinks, how Google approaches search and the process. And as search marketers, that’s very, very valuable.

So, you’ll want to look at the whole featured snippets study that Eric produced. There’s a lot more detail in there; a lot more for you to learn.