The OBIEE BI Server cache is the most effective way of improving response times of OBIEE dashboards followed by database modifications and tuning. Using data present in the cache limits the load on the database considerably. It is also effective for improving network, BI server and dashboard performance for obvious reasons. However, after a certain interval the same cache needs to be cleared since data in warehouse is ever changing and new cache needs to be built for the reports to pick up updated data and use it in nearest future. The most important decision that needs to be taken while deciding cache purging is: When and how to flush the cache.

There are multiple options for cache purging such as:

This article will describe the step by step process of we can automate the OBIEE server and web cache purging using shell script and including it in daily ODI load run. The script runs after the load is run daily incremental data load. The script has been made generic to be used in any environment

As we know that OBIEE uses cache (both at server and web level) to store the query results. After daily ETL run we have to purge both the cache manually (using Manage-> Cache in OBIEE Admin Tool & Administrator option in Analytics) so that users can view the latest data in reports and dashboards. To reduce this manual effort a shell script has been designed that would purge both server and web cache without the manual need to access to OBIEE tool. This script is added as the last step of the daily ODI load plan so that as soon the data gets refreshed the cache gets purged.

Write a shell script by using nqcmd command to clear OracleBIServer cache. The nqcmd utility is available both on Windows and UNIX systems. The syntax of nqcmd command is:

To purge the presentation server cache:

OBIEE 11G has a catalog manager command called “ClearQueryCache” to clear out the Presentation Server cache.

The syntax of ClearQueryCache command is:

1. Create a catalog manager credential properties file. Open a text file and type the following entries.
login=<weblogic_admin_Username>
pwd=<weblogic_Admin_Userpassword>
And save in a directory with the file name as catmancredentials.properties.

2. Assign the catalog manager path of the bi server to a variable called RUNCAT_DIR as shown below:

3. Run the command “uname –a” to get the system details .Then extract the system name and assign it to a variable with the following commands var=$(uname -a)

4. Put the above name to the analytics URL and assign it to another variable.

The above steps 3 & 4 are designed to make the script a generic one so that it would run in any environment (Dev,Test, Prod etc.) without any alteration to it.

5. Run the following command to purge the Presentation Server cache.

1. Login to Analytics and click on some reports and dashboards

2. Open the BI Administration tool and open the repository in online mode. 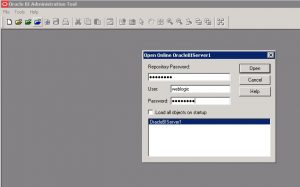 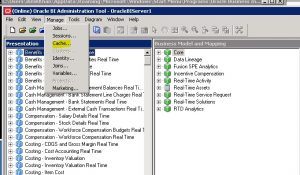 4. Note the cache entries as shown in figure below. 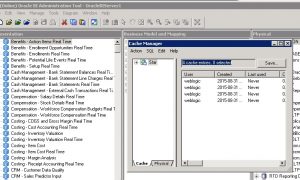 5. Now run the script to get the following output. 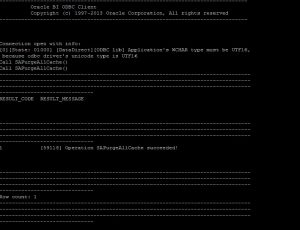 6. Now go to the cache again in the repository and check to see the entries got deleted. 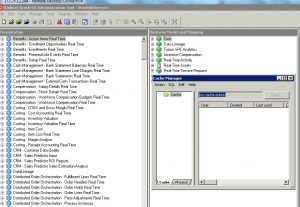 1. Login to Analytics and click on some reports and dashboards.
2. Go to Administration -> Manage session. 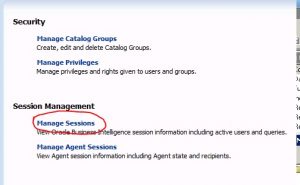 3. Check for the cache entries.

4. Now run the script to get the following output.

5. Go back to manage session again and check to see the entries got deleted as shown below. 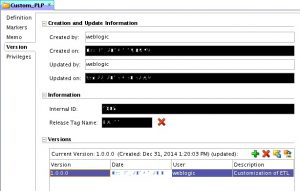 2. Under Custom_PLP folder create another folder ‘PLP_Custom_OBIEE_Cache_Purge’ with proper version. All the realted code for cache purge will be residing under this folder. 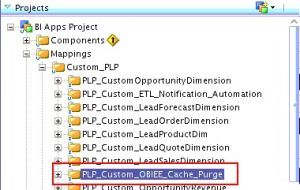 4. Now Go to Diagram tab of the package and add a tool ‘OdiOSCommand’ in the diagram. Provide the details of the OdiOSCommand as shown         below: 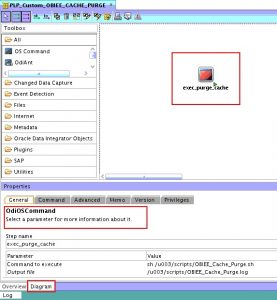 Parameter Details given below:

5. Save the changes. Create a scenario for the above package.

6. Now we need to add this above scenario in the load plan. Open the load plan in which you want to add this cache purging activity. Right click          on the ‘1 PLP Load’ Step present under Start Load Plan Global Variable Refresh Warehouse Load Phase 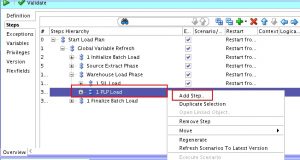 7. Provide the details for the step as given below:
Step Type : Serial
Step Location: Add a child step to selection 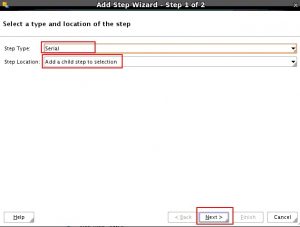 Then Click on Next.
Now Provide th Step Name and click on Finish to create the step. 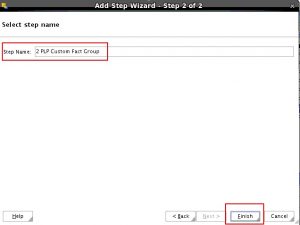 8. Expand the ‘1 PLP Load’ Step and you will find the new Serial Step created there. 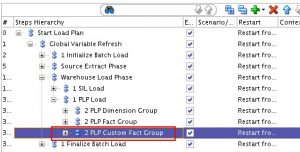 Set the Restart Type option for this step as ‘Restart from Failure’. 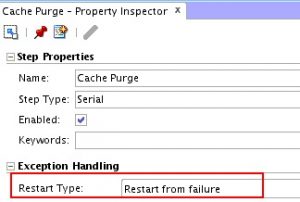 11. Set the property of the newly added scenario in the load plan as shown below: 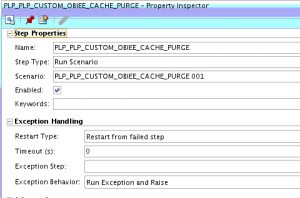 So now the Cache Purging has been added in your load plan as a step and this process will run as a step in the load plan.