We’ve been tracking Twitter’s integration into the Google search results since 2014, and today I’m publishing the fifth of our studies on the topic. The TL;DR of today’s results is that Google’s indexation of Twitter is at the lowest level ever. Read on for the details!
For reference, here are links to the prior versions of this study:

In this data set, we have 693 users who posted a total of 47,799 tweets. On an aggregated basis, only 5.2% of these tweets are in the Google Index. The following shows the breakout of the indexation through all five editions of the study that we’ve done: 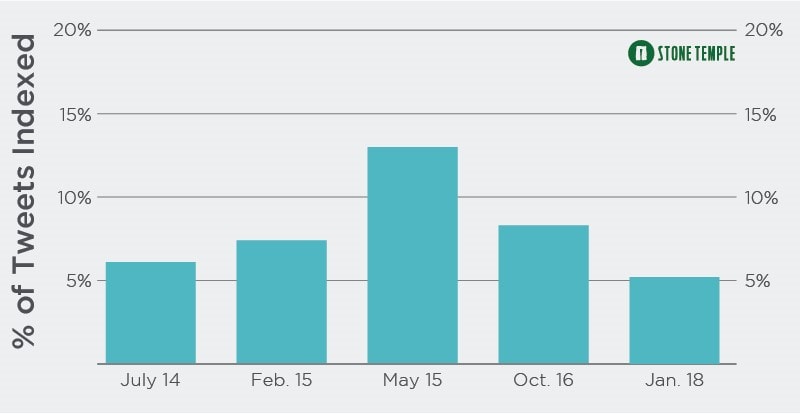 [Tweet “Google’s indexation of tweets falls to its lowest level ever. See the complete study at”]
This is the lowest we’ve seen in all five of our studies. It’s also interesting to see how quickly tweets get indexed. We’ve shown through the history of the study that tweets are NOT indexed quickly. This surprises most people, as they assume that Google looks at Twitter to capture breaking news, but that proves to not be the case. Here is the history of the percentage of tweets that indexed within seven days: 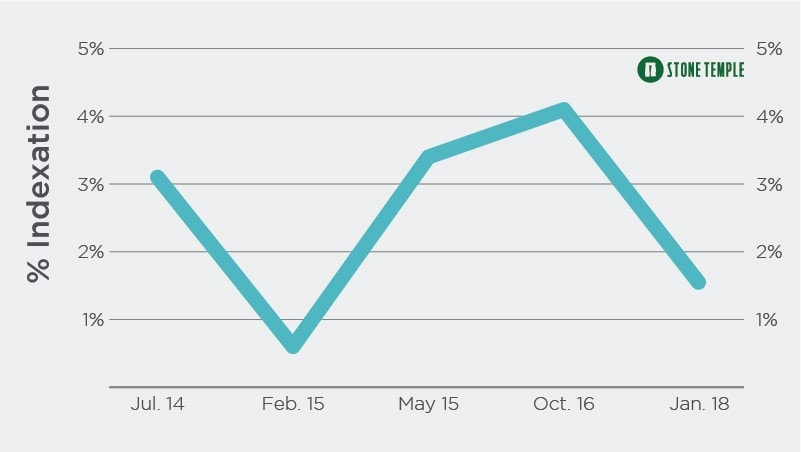 We also took a look to see how the level of indexation correlated with the user’s follower count. Here is what the data shows: 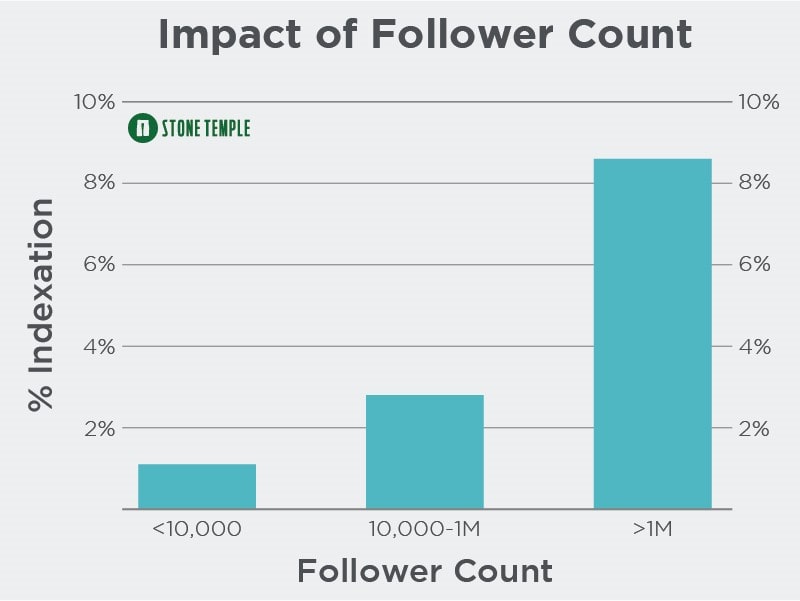 [Tweet “Study finds that percentage of tweets indexed by Google increases in proportion to the tweeter’s follower count. More at”]
I’m in no way suggesting that Google looks specifically at follower count. However, some aspect of the person’s overall authority does matter. That could be the way that people engage with their account (people with more followers tend to get more engagement), rather than follower count, specifically.

That brings up the next question. Do tweets that get more likes (favorites) tend to get indexed more? Let’s take a look: 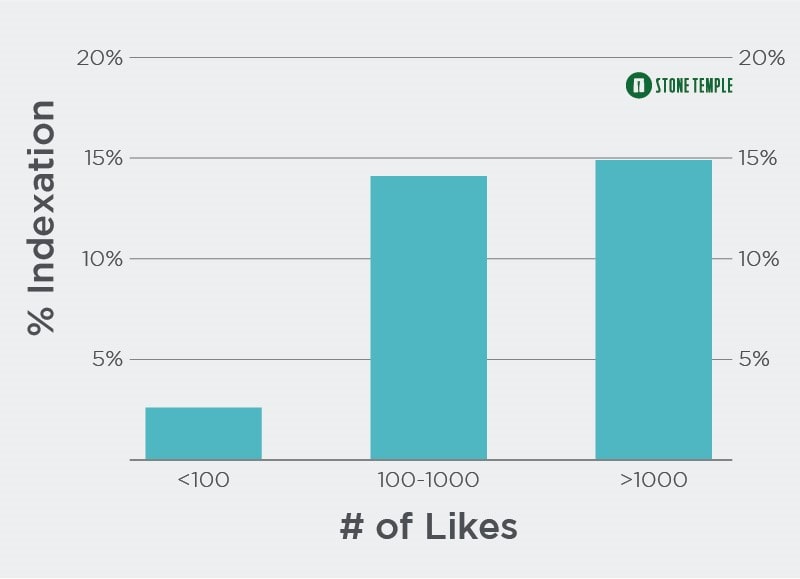 [Tweet “Study finds tweet engagement affects likelihood the tweet will show in Google search.” ]
The answer is a clear yes. Tweets with more engagement do get indexed more. This is consistent across all editions of the studies that we’ve done. Could this be a direct consideration in whether or not Google indexes a tweet? It’s a possibility. 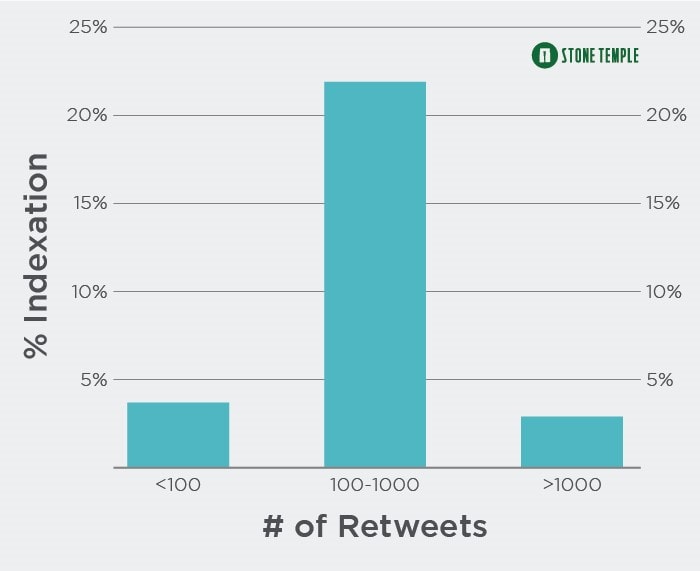 As you can see, a higher level of retweets also correlates well with the potential for being indexed, but only up to a point. However, this occurs at a lower level than favorites. This suggests that the number of favorites is a stronger consideration than the number of retweets, possibly because there are many accounts that are just bots auto-retweeting other people’s accounts.

We also pulled data on the potential impact of having a Twitter Verified account. Here is what we saw: 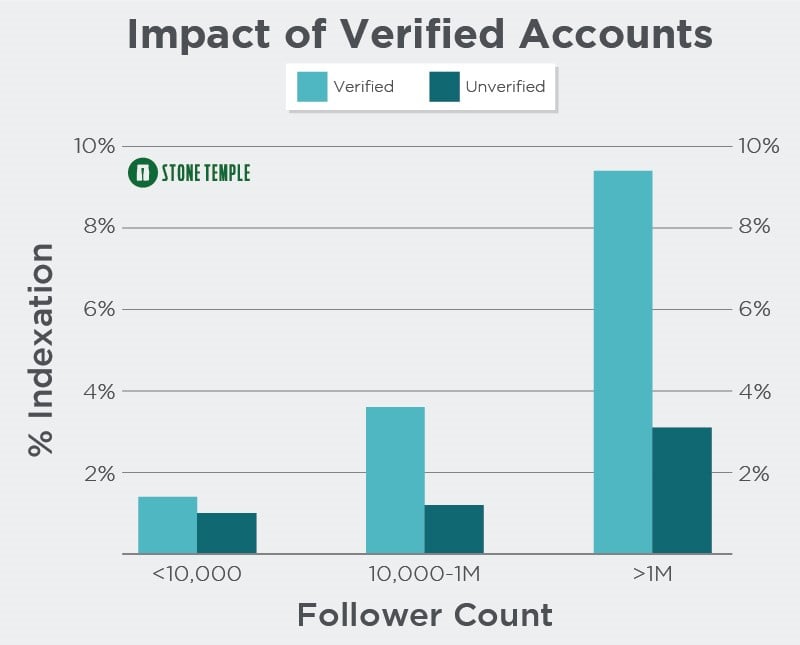 [Tweet “Having a verified Twitter account is highly correlated with having more tweets show in Google search. Learn more at]
So having a verified account does correlate with higher chances of indexation, but it’s not clear that this is a direct factor. It could just be because people with verified accounts tend to get more engagement with their tweets.

Last but not least, we also pulled data to see if the length of the tweet was a factor. Note that due to the timing of our data collection, which was as Twitter was rolling out tweets over 140 characters, we excluded tweets over 140 characters from this data. Google did not appear to be indexing those longer tweets during the beginning of the data collection, but started to near the end of it, and that was going to skew the data. Here is what that data showed for tweets up to 140 characters: 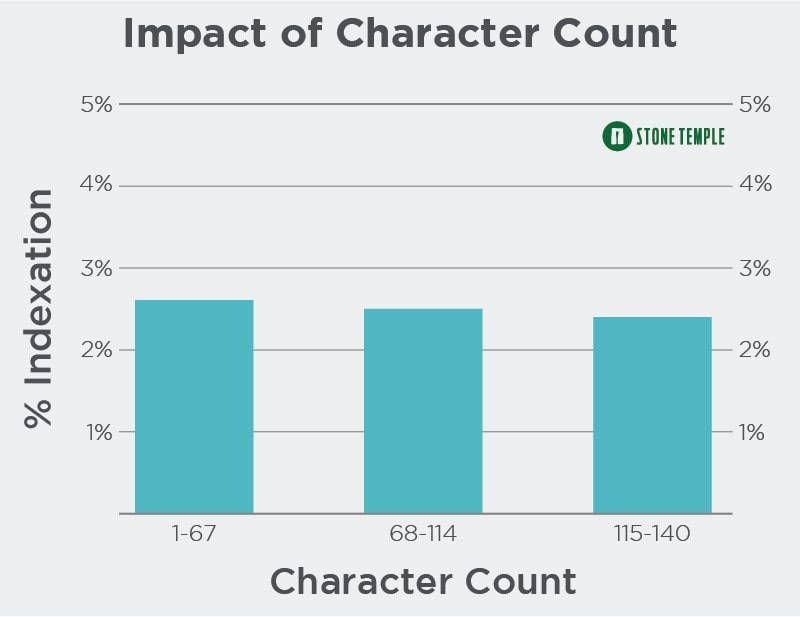 As you can see there is basically, no difference today, for tweets under 140 characters.

The main conclusions of this study are:

Thoughts on “How Much Does Google Index Twitter in 2018?”