It looks like mobile has already taken the biggest piece of the Internet pie. But according to some recent research by Perficient Digital, desktop still wins in some important categories.
In this episode of our popular Here’s Why digital marketing video series, Perficient Digital’s Eric Enge explains why we shouldn’t ignore desktop visitors, while at the same time recognizing the tidal shift toward mobile.

Don’t miss a single episode of Here’s Why. Click the subscribe button below to be notified via email each time a new video is published. Over a half million views on YouTube!

Mark: Eric, we’ve been hearing, for at least a couple of years now, that mobile is overtaking desktop as the primary way people access the web. Now, is the mobile revolution already a done deal? I mean, should we be paying attention only to mobile from here on out?
Eric: Certainly mobile has been growing rapidly, but research we did using SimilarWeb data shows that desktop still has a few tricks left up its sleeve.
Mark: But hasn’t mobile now surpassed desktop?
Eric: That’s true in terms of overall traffic generation. As you mentioned in the introduction we found, via data from SimilarWeb, that about 56% of web traffic, globally now comes from mobile devices, but that’s not really the whole story.

Mark: No?
Eric: Well, in a study we published earlier this year, we dug more deeply into that SimilarWeb data and found that while mobile has edged passed desktop in traffic generation, desktop still wins in some other categories.
Mark: Such as?
Eric: Well, for one thing, we found that about 60% of the time on site is from desktop users. Also, mobile bounce rates are 40% higher than desktop.
[Tweet “Mobile drives more search traffic, but Desktop still has longer time on site, lower bounce. More at”]
Mark: That actually doesn’t surprise me. I mean, some recent Google research shows that mobile shoppers want to find things as quickly as possible, and if they’re looking for information they want to get it in as concise a form as possible.
Eric: Right, so if you’re not providing that kind of experience when people visit your site from mobile, they’re probably leaving quickly and going elsewhere. Despite the fact that the desktop gets more engagement overall than mobile, it’s clear that we can’t ignore mobile since the number of visits coming from mobile is only going to increase.
Mark: How should we change our approach to our sites based on that?
Eric: Well, it used to be that we could design our sites for desktop and just include a mobile version as an afterthought, but we can’t do that anymore. In fact, I’d say that we should actually start with the mobile site design now, so that we’re accommodating what is, or soon will be, the majority of our visitors.
Mark: And that Google research I mentioned makes it clear that designing mobile first means more than just making the site look nice on mobile devices. We also have to think about how people behave differently on mobile. Our sites have to get them to what they’re looking for with as little navigation as possible and make it super easy to carry out whatever actions we want them to do.
[Tweet “Being mobile first is more than just looking nice on mobile. It’s a whole user experience mindset. >>”]
Eric: Right. And let’s not forget that Google has said that they’re working on switching their ranking algorithms to prioritize their mobile index over the desktop. We don’t know when that will be fully implemented, but our own research shows that many sites are poorly optimized for mobile SEO. However, none of this means we should now ignore desktop, far from it. It’s still the case that most conversions happen on desktop so it pays, like, literally pays to keep optimizing the experience there.
Mark: Should everyone with any type of site or business shift to mobile-first thinking immediately?
Eric: How urgent that is varies by industry. In our study, we have a chart showing how the percentage of traffic on mobile changes for various industries.
For example, in the finance sector, only 40% of visits originate from mobile devices. So in industries like that, you might be able to take a little more time. But if you see that your mobile traffic is growing rapidly and your conversions aren’t keeping pace, you might want to get started more quickly on improving your mobile experience. 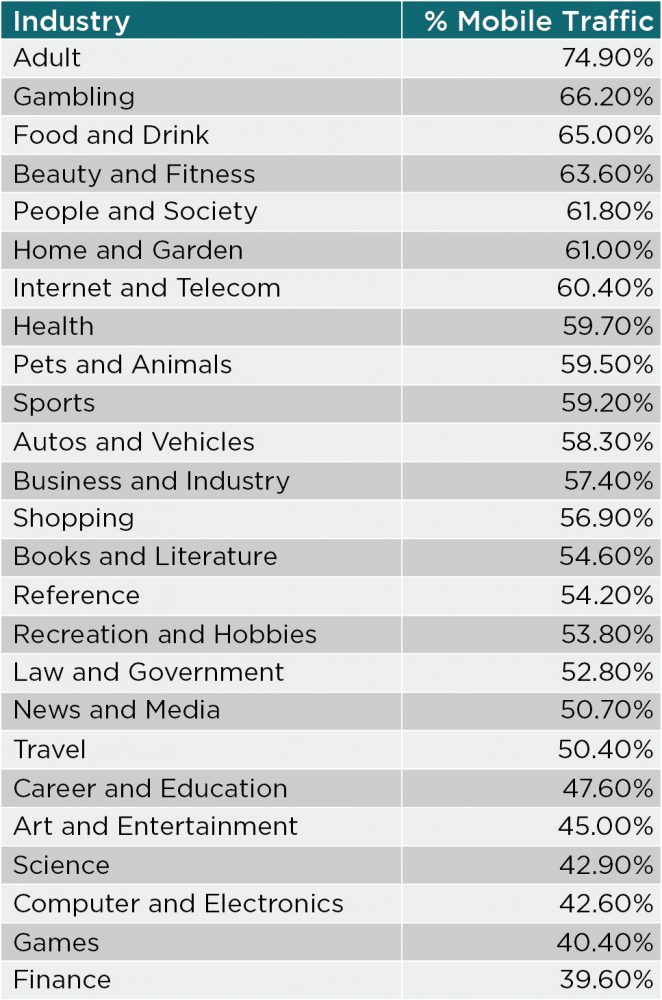 Mark: Thanks, Eric. Now, our readers can find links to your study and my Medium post about mobile user behavior here.
Eric: Great.