Today most android devices in the market has a GPU, we all know that it’s a hardware unit for processing 3D graphics. The performance of your smart phone’s GPU is important, especially when you are playing 3D games. And you may wonder how do app developers build all those complex graphics and animations in a game. Well, one way to do that is through OpenGL ES.

It’s a abbreviation for Open Graphics Library for Embedded Systems. OpenGL ES a flavor or subset of the OpenGL specification, it’s intended for embedded devices like smart phones, PDA and game consoles. In Android platform, several versions of the OpenGL ES API are supported, but why OpenGL ES 2.0? Because it does a great job both in compatibility and performance, you can check it here.

There’re two basic ideas in OpenGL, vertex and fragment. All graphics starts with vertex, a list of vertices can form a piece of graph. And fragments corresponding to pixels, usually a fragment is a pixel, but in some high resolution devices, a fragment may have more pixels.

To understand the fragment better, we need to know about Rasterization. Rasterization is a process to map point, line or triangle into pixels on the screen, every mapping area is called a fragment. So rasterization is actually a process of generating fragments. Here’s a figure shows this process. 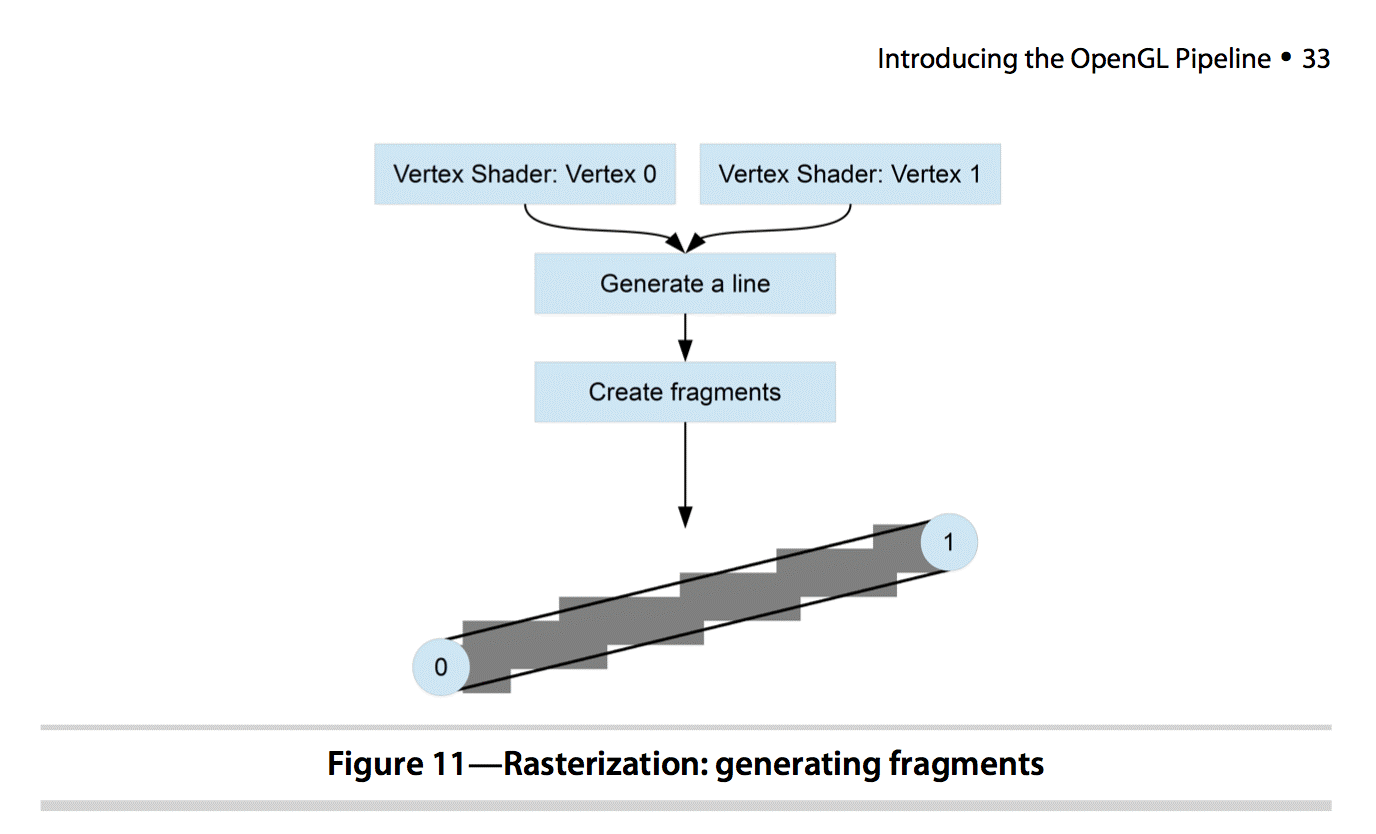 Shaders played a very important role in this process as you can see in the figure. They are used to describe how to render the graphics. There are two types of shader, Vertex Shader and Fragment Shader. The language shader use is called GLSL, full name is OpenGL Shader Language, it’s a C like language.

Another important knowledge in OpenGL is Graphics Pipeline. There are several steps for OpenGL to render graphics. First, every vertex will execute its Vertex Shader to know the final position of each vertex. There must be a global variable called “gl_Position” in its main method, it’s used to assemble all the vertices into dot, line or triangle. After rasterization, every fragment will execute Fragment Shader once to determine the color, and its related global variable is “gl_FragColor“, it’s used to determine the final color of the fragment. 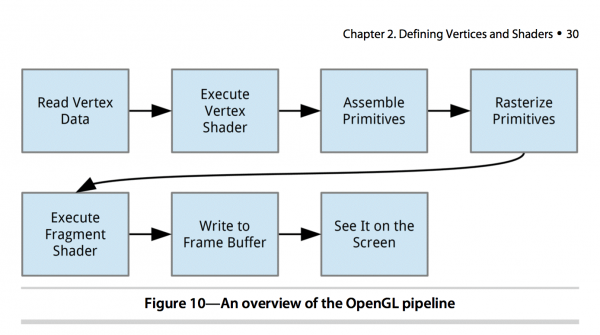 There are 5 different coordinate systems in OpenGL.

Show Me the Code

Ok, enough said, it’s time to do some real work. Here I’m going to show you how to draw a pentagon with OpenGL ES 2.0.

First of all, declare OpenGL ES use in your AndroidManifest.xml:

To implement GLSurfaceView.Renderer, there’re 3 methods you must override: 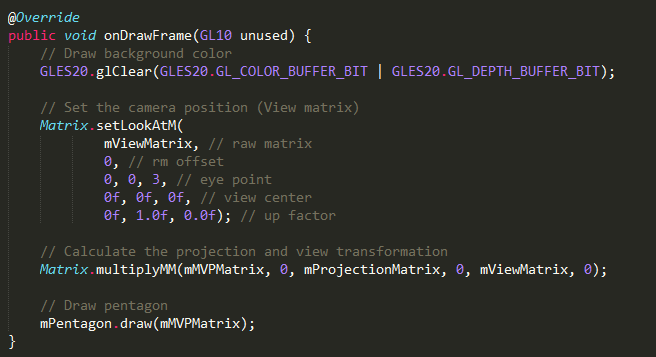 As you can see, we created a manager class called Pentagon to hold all the OpenGL creation and render work. In Pentagon, first there are Vertex Shader and Fragment Shader, we need to define these shaders so that we can draw the shape.

Here the MVPMatrix stands for Model View Projection Matrix, as I mentioned earlier, we need to do a Project for the camera coordinates, so the view won’t be skewed by the unequal proportions of the view window. And as you can see in this GLSL code, uMVPMatrix factor must be first, in order for the matrix multiplication product to be correct.

Then we can define the coordinates and draw order, every polygon in OpenGL world is formed by triangles, so a pentagon needs three triangles:

In the constructor, we do some initialization work like this:

And then we define a draw method to draw the graphics: 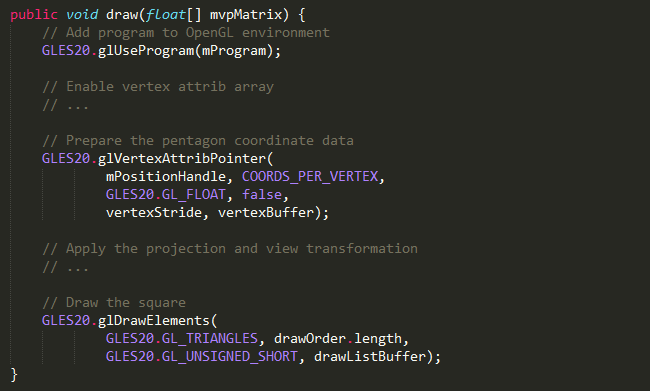 At last, add this customized GLSurfaceView in your activity’s ContentView:

Run your project now, you will see a pentagon on your screen like this: 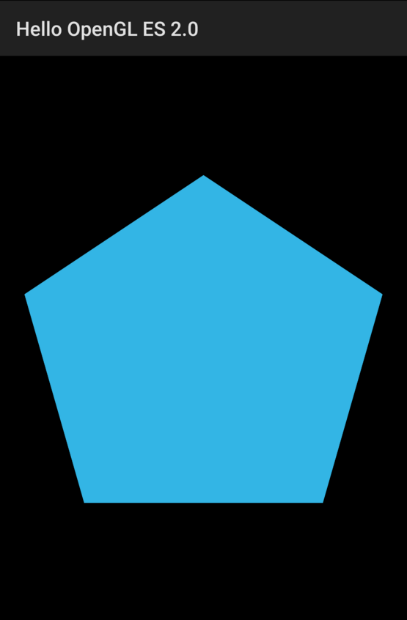 To make things cooler, let’s make the pentagon move. The Android framework allows us combine OpenGL ES object with the touch event, so we can add touch listener on the GLSurfaceView to capture user interactions. 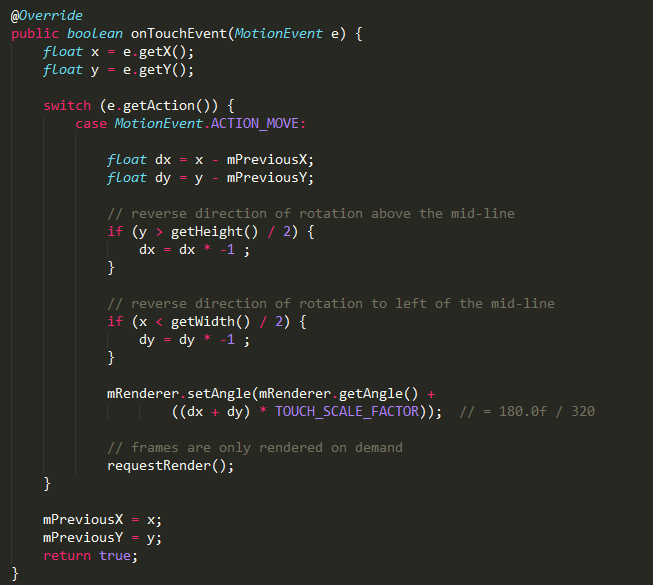 Remember to set your GLSurfaceView‘s render mode to RENDERMODE_WHEN_DIRTY, so that renderer can draw the frame again when the touch event is captured.

With OpenGL ES 2.0 framework, you can make the most use of the device’s GPU, and you can build graphics that are limited only by your imagination. You can even build an Augmented Reality application if you want.