Yesterday, at the Pierre Hotel in New York City, the 2017 Delivering Alpha Conference gathered the most important players in asset management. 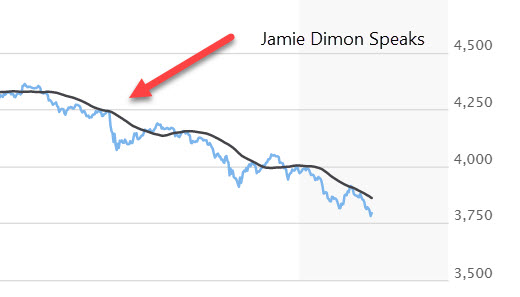 So, what exactly did he say about bitcoin?

This statement is a reflection on one of the most famous market bubbles in history, the tulip bulb bubble. In the early 1600’s, speculation drove the value of tulip bulbs sky high, but in 1637, prices fell and people began selling tulip bulbs at a fraction of their value, causing financial devastation to many investors.

He also said that he would fire any trader trading bitcoin for being “stupid.”

Does this mean that it’s time to short bitcoin? Not necessarily. Dimon stated that “It could go up to $100,000 before it goes down.” But he does believe that one day it will be revealed that the bitcoin emperor, has no clothes.

Although the market did take a swift dip yesterday, the overall trend for bitcoin is up, up, up. One year ago, it was trading at $608 and it is currently sitting at $3,806. When, and if, it will wither like the tulip bulbs, is to be seen.