Skype for Business – How to Install on Windows Server 2016

On June 20 of this year, Microsoft announced support for Skype for Business Server 2015 with Window Server 2016. This comes on the heels of the May 2017 update for Skype for Business Server 2015, and it has been anticipated that this update would provide the support. While Microsoft does provide a basic guide on how to install Skype on Windows Server 2016, I found that article lacking in detail on some of the finer points. This blog post will hopefully provide some additional guidance and support for your installation.
The article above assumes the server has connectivity to the Internet to be able to download the latest updates. It does not address what to do if you are working in an environment where access to Microsoft updates is not allowed or forced through another service like SCCM, nor does it address any changes in the prerequisites required for the server. The following steps outline what I did to install this in my lab without Internet access.
First, when installing the required Windows Roles and Features for a Standard Edition server, the “Desktop-Experience” is no longer available as a feature to be installed. This altered my PowerShell install command to the following:
Add-WindowsFeature RSAT-ADDS, Web-Server, Web-Static-Content, Web-Default-Doc, Web-Http-Errors, Web-Asp-Net, Web-Net-Ext, Web-ISAPI-Ext, Web-ISAPI-Filter, Web-Http-Logging, Web-Log-Libraries, Web-Request-Monitor, Web-Http-Tracing, Web-Basic-Auth, Web-Windows-Auth, Web-Client-Auth, Web-Filtering, Web-Stat-Compression, Web-Dyn-Compression, NET-WCF-HTTP-Activation45, Web-Asp-Net45, Web-Mgmt-Tools, Web-Scripting-Tools, Web-Mgmt-Compat, Telnet-Client, Windows-Identity-Foundation
Next, during Step 2 of the Deployment Wizard, when attempting to install the IIS URL Rewrite module, it will fail but does not explain why: 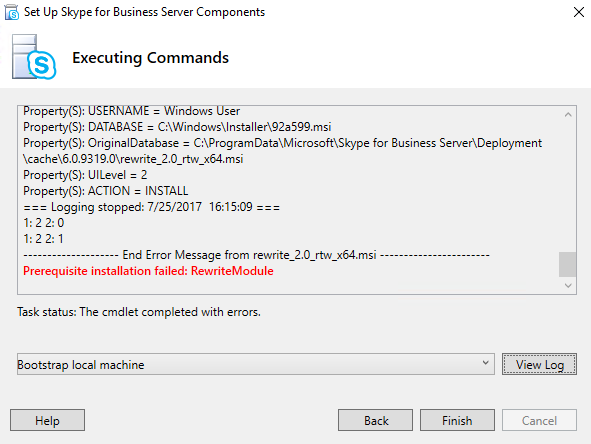 If you browse to the MSI on the installation media and try to install it manually, the wizard displays the following error about need IIS 7.0 or greater to install the module: 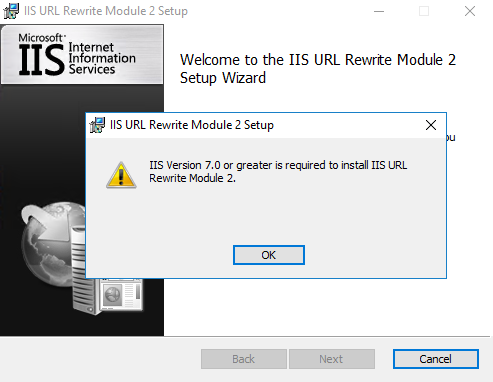 Since this is Window Server 2016, we are obviously running an IIS version greater than 7.0. The issue appears to be with the installer not recognizing the version installed on the server as meeting the requirements (probably some prerequisite checks that are hard-coded). From here you have two options, one “ok” and one preferred. The first option is to modify the registry to change the version of IIS to one the installer recognizes, then install the module, and change the registry back. While this may work, I always err on the side of caution when making registry changes unless it is part of a documented workaround. The second option is to download a newer version of the IIS URL Rewrite module that correctly installs on Windows Server 2016. I went this route and the Skype for Business Deployment Wizard correctly identified that this prerequisite was installed and continued the installation: 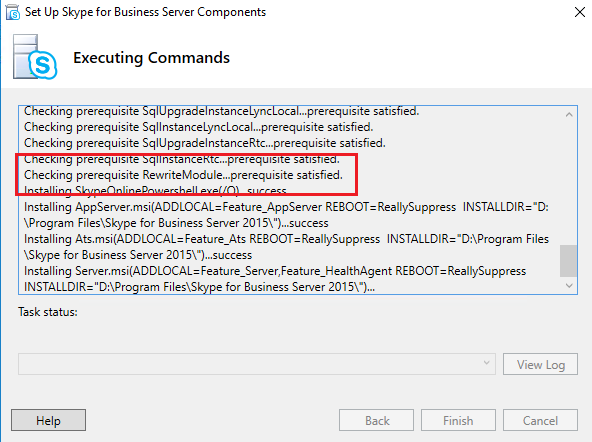 After completing the installation of the components in Step 2, I decided to install the May 2017 Cumulative Update (CU5) into the environment before configuring certificates and starting services. Microsoft has documented that prior to CU5 the RTCSRV service may fail to start or crash on Windows Server 2016. Follow the standard procedures for applying Skype for Business Cumulative Updates found in this Microsoft knowledge base article. Be sure to stop services as there are a few now running after the core and server components have been installed. Once the cumulative update was installed and database updates applied, I completed Step 3 to configure my certificates and started up the services in the pool successfully.
Did you find this article helpful? Leave a comment below or follow me on Twitter (@JeffWBrown) for more information on Skype for Business.

I am a Senior Technical Consultant focusing on Lync/Skype for Business. I have a broad background in Windows system administration and enjoy writing PowerShell scripts.