How to Install a Kafka Cluster in Docker Containers

The Kafka is a stable and real-time communication and message delivery distribution system. Usually the enterprise Kafka application and system will ask for several machine servers supports. But for proof-of-concept or for special circumstances, we want to show you a simpler way to use the Kafka application. Below, I will show you how to install a Kafka cluster on Docker.

Before you start the installation of a Kafka cluster on Docker, you will need a list of required environment and software.

Tips: if you want to use the zookeeper on Docker, please make sure of the port mapping to the server from the Docker Container

As stated in Figure 1.0 as following, I am going to set up 3 nodes based on the Kafka Cluster over Docker. What’s more, we will have the zookeeper installed on Docker. 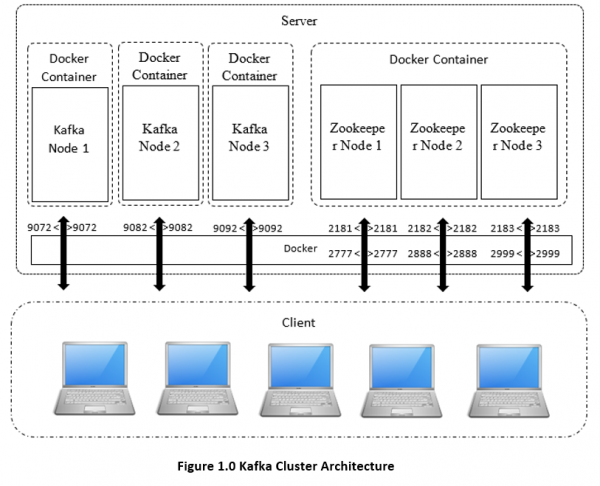 Run the command above and you will get a Docker Container with an identifier ‘077493067ec7’.

After uncompressing the JDK tar package file under a local folder (recommended /opt folder), you can configure the environment variables for JDK. Before you start this, I recommend that you  install the vim application in the Docker Container. It will make it easier for file edition.

Open the ~/.bashrc file and add the following script in the file and save

Execute the script and activate the environment variables.

Open the uncompressed Kafka folder and edit the server.properties file under the config folder.

After saving, you can run the Kafka broker node by the command as below.

When you want to create a Kafka cluster on a local server by Docker, you can repeat the above steps to create more. Therefore, it should be easy for you to have your own Kafka cluster ready in couple of hours.

Thoughts on “How to Install a Kafka Cluster in Docker Containers”