How On-the-Job Training Benefited My Career and Client Project

Recently on a project, I came across an opportunity and needed to further my knowledge of a UI framework. I’m a technical consultant based in our Denver office, and I was working on the project full time. I needed to find a way to learn without spending too much time researching outside of work, or spending too much of my personal time on training. Fortunately, Perficient has some great resources that allowed me to get the training I needed for the project. And I wasn’t the only one who benefited.
The Knowledge I Needed 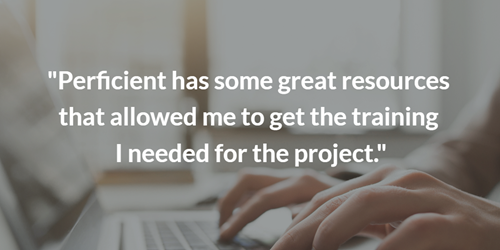 Our development team has been working on converting an ordering system for our client into a web-based format. We have successfully converted all the pieces of the application, and users have been using this web application in production for more than a year. As we have progressed in the web application, we have found areas where Angular would be a high value addition in the UI. Instead of replacing the entire UI in one iteration, we have broken up the sections of the application to “update” the UI to Angular in order to minimize the amount of regression testing needed for each effort.
A couple of the team members are proficient in the earlier releases of Angular, and they were able to implement Angular into a couple of the portions of UI. This was a great help because the team members were able to complete the work in the iteration. We were able to deploy the new implementation in a short amount of time. One concern in our agile development life cycle is being able to support any defects (if any) that may come from these portions of code with team members that are not as familiar with Angular. How can a less proficient team member like myself provide support in the Angular framework?
Sharpening My Skills
Enter one of the many benefits of working at Perficient: the yearly training budget. There is a budget worked in that allowed me to take advantage of training and furthering my own career education. My local business unit was able to provide a yearly membership to Pluralsight. For anyone unfamiliar, this is a great online resource that comes with training videos and sessions with a hands-on approach to learning. There are a ton of courses available online, and they allow you to code along with the training courses.
Teaming Up to Reach My Goal
Our project was comprised of multiple members from different Perficient offices. One of the team members, Amie, was in the same boat as me, desiring to know more about Angular. Amie and I decided to join together and set a training goal between the two of us. Together, we logged into Pluralsight and found some Angular Fundamental classes right away. Due to actual job constraints and being in separate states, we decided it was more efficient to complete the courses on our own and then come together to discuss any questions and how it applies to the code that was implemented in our project’s application.
After completing the training, we are working together to understand the current implementation as well as brainstorm ways we can incorporate our newfound knowledge into the UI that has not been updated. 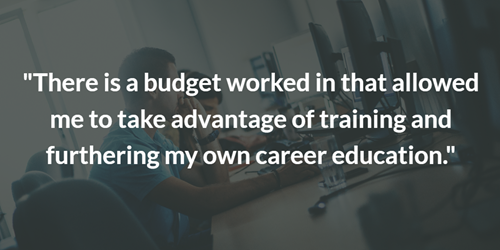 A Win for Everyone
It isn’t always easy to find time to set aside and do training for a job, especially when you are working on a project that demands full-time engagement. Setting some training goals with Amie really helped in completing the training.
We are fortunate to have a company that supports this training and that is willing to cover a membership to a great technology learning platform like Pluralsight. We are now both able to immediately take on changes to the existing code and also work toward implementing new code.
Read about how other Perficient colleagues are growing their careers here.