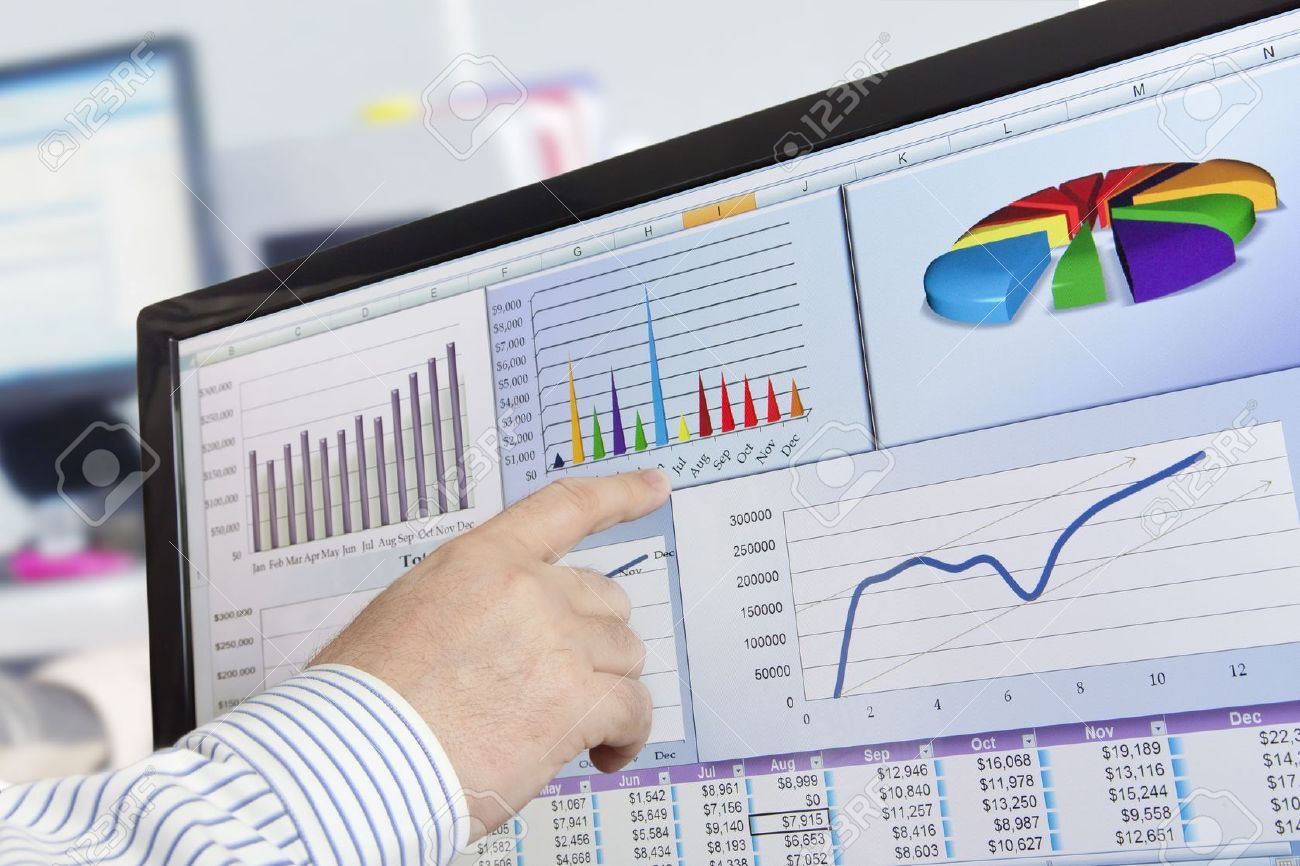 For example, a bank’s goal performance report uses both budget data sourced from Oracle Planning and Budgeting Cloud Service (PBCS) by month, and loan and deposit data sourced from ERP Cloud by transaction date. Since budget data and transaction data are at different Time hierarchy levels, instead of creating two separate logical dimensions for date and month, a conformed Time logical dimension is desired in order for both facts to be reported in the same goal performance report. 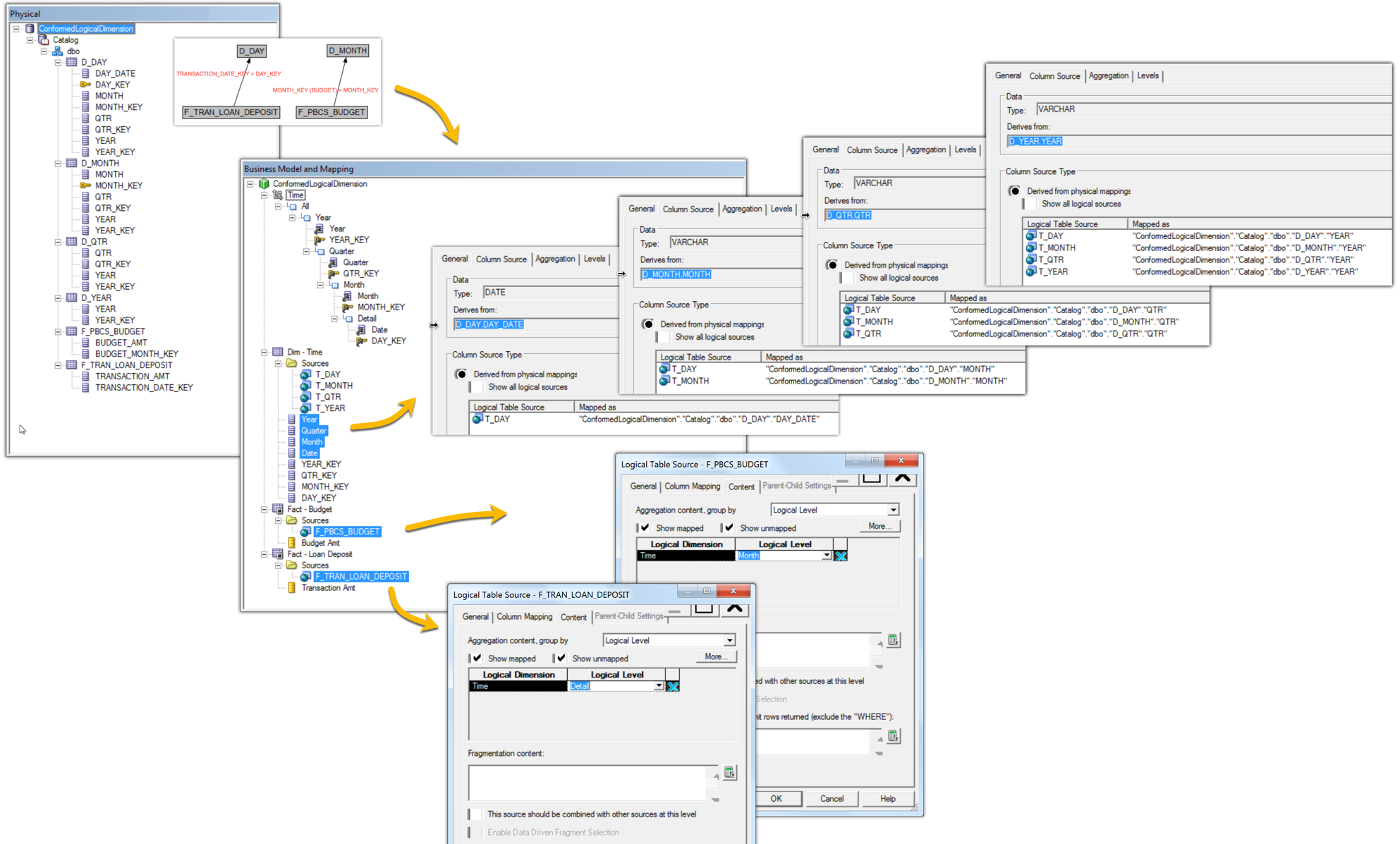 1. Overload the dimension with all hierarchy levels

The DATE_ID is overloaded for Date, Month, Quarter, and Year dimension data and needs to be constructed uniquely to identify the corresponding overloaded dimensions, for example, 20170101 (yyyyMMdd) for the Date, 201701 (yyyyMM) for the Month, 201791 (yyyyQQ+90) for the Quarter, and 2017 (yyyy) for the Year.

The conformed logical dimension created here is just a normal logical dimension.  To create the Time dimension, simply add the D_TIME database table to the model, rename logical columns, and complete the hierarchies. 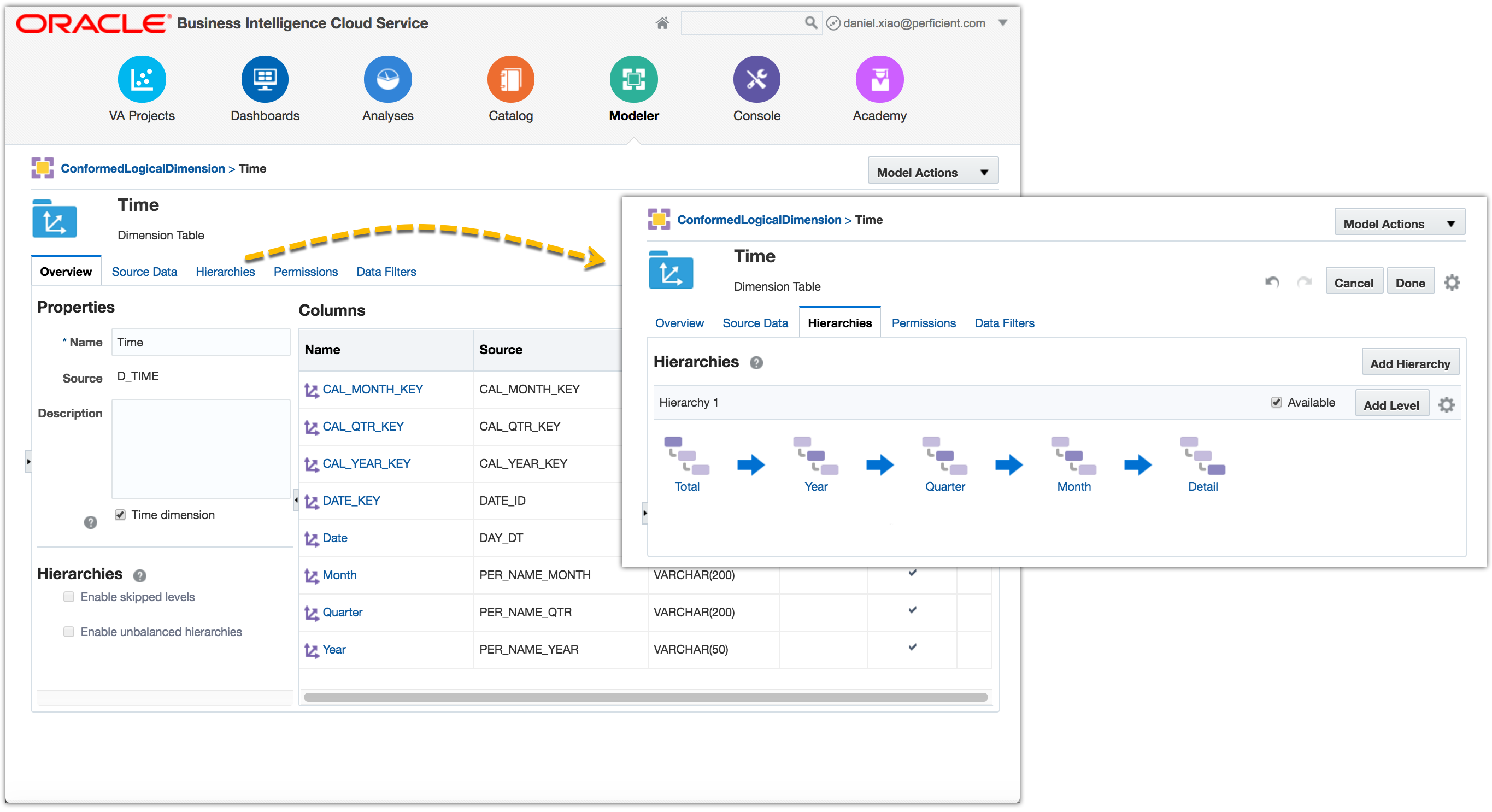 The fact tables are now able to join to the conformed Time logical dimension in different hierarchy levels. 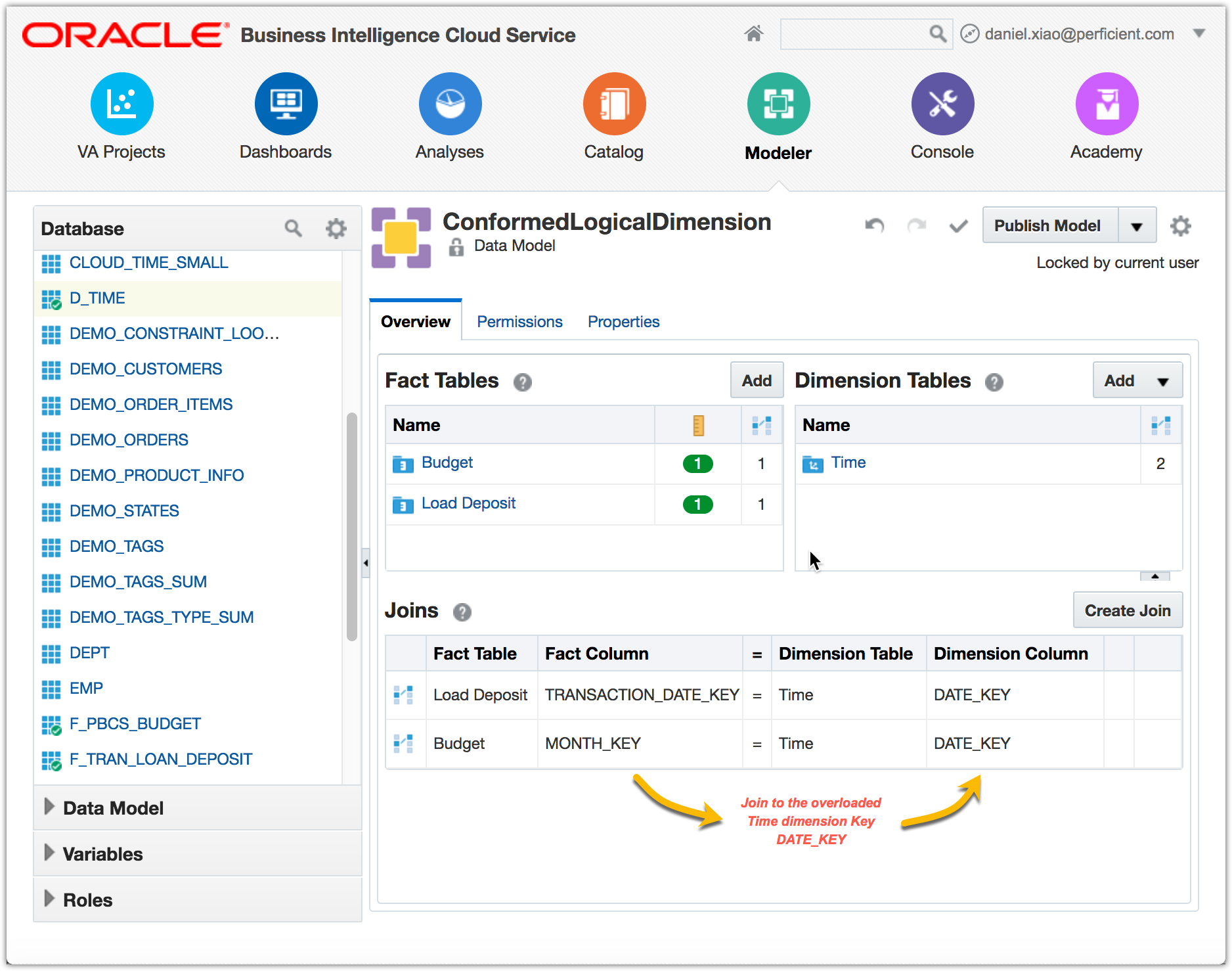 3. Set fact measures to use the proper dimension hierarchy level

One last thing to do is to configure all measures in the PBCS Budget fact to be level-based measures.  This will enforce the PBCS Budget fact to always work correctly with the conformed Time logical dimension even if the report is attempting to report at the Detail (Date) level.  In Oracle BI on-premises, this is set through the Content Logical Level of the fact’s LTS, but in Oracle BICS, we have to handle this through fact’s measures.

Edit and set all PBCS Budget fact’s measures to use the Time dimension’s Month Aggregation Level. 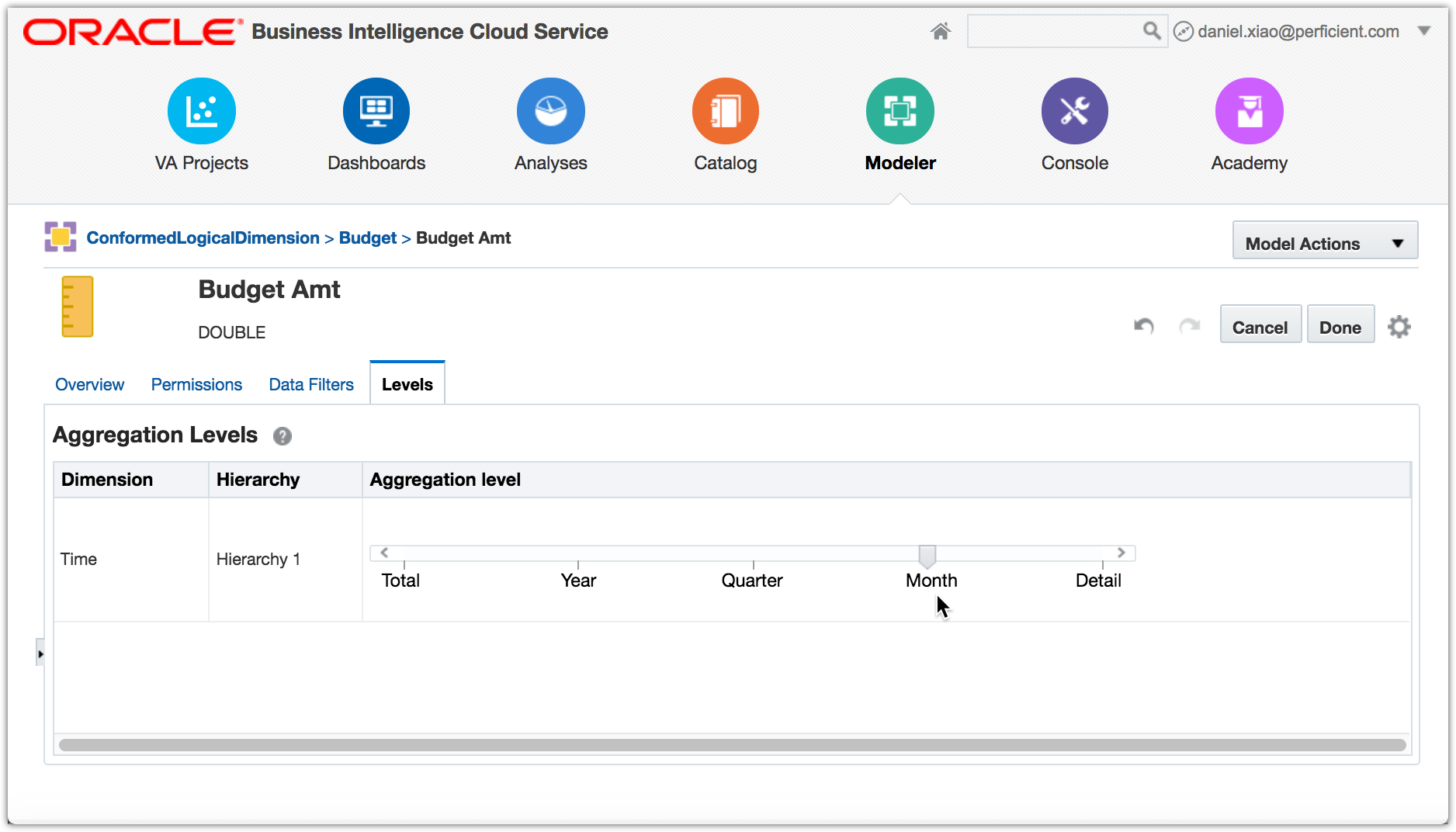 In summary, the same practice presented here in the examples can be used to create any conformed logical dimensions.  In Oracle BICS, it does not have the ability to overload the Logical Table Source (LTS) mappings as that in Oracle BI on-premises, instead, it’s required to overload the actual physical database dimension table with all possible hierarchy level data, and set all necessary fact’s measures to be level-based metrics in the logical data model.