Some people believe that click behavior, such as click-through rate (CTR), influences Google search rankings. Does it? Find out in this episode!

Don’t miss a single episode of Here’s Why with Mark & Eric. Click the subscribe button below to be notified via email each time a new video is published.

Eric: No and yes.

Mark: What? Wait, how can the answer be both no and yes?

Eric: Because I think we can establish that CTR is not a direct ranking signal for Google. At the same time, it can have an indirect effect.

Mark: Maybe we should back up a bit before we dive into that more deeply. So, what is CTR first of all?

Eric: Well, as you said a moment ago, CTR stands for click-through rate, the rate at which people click on something, in this case a particular search result. So if a hundred people are exposed to a certain result, and 10% of them click on it, that’s a 10% CTR.

Mark: And why would people think that might be a ranking signal?

Eric: Well, think about it. Lots of people clicking on a certain result might indicate a real interest in it, and that might mean it’s a better result than the result above it. Notice I said might there. That will be important later. Anyway, many people have assumed that search engines like Google would use such a signal, of course, bouncing it off against other signals that it uses in ranking.

Mark: That all makes sense. So why are you so certain that Google does not use it as a direct ranking signal?

Eric: Well, primarily because Google has told us they don’t. You and I both attended the excellent presentation at SMX West this year by Google engineer Paul Haahr called, “How Google Works: A Ranking Engineer’s Perspective.” Paul told us that Google uses click behavior as one factor it looks at, but only in what he called live experiments. 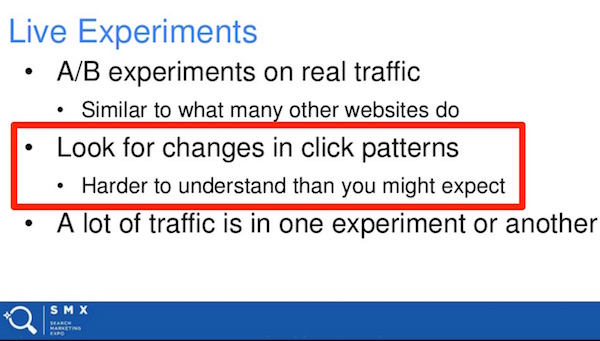 These are time limited tests run with a limited group of Google users. Paul went on to explain that even in those tests, the results aren’t used to influence a particular result being tested, but instead are used in overall evaluation of the quality of Google’s results. You can find a link to Paul Haahr’s slide deck from SMX West, along with a link to another relevant conversation I had with Andre Lapaz of Google, in my article on CTR as a ranking factor.

Mark: So let’s get to the crux of the matter. Why wouldn’t Google use CTR as a ranking signal?

Eric: I can answer that in one sentence. Because it’s a signal that is way too easy to game. And even when it’s not gamed, it’s too hard to use effectively.

Mark: Explain the first part of that. “The CTR is easily gaimed,” you said.

Eric: Yeah, sure. Ever since people first discovered that ranking high in Google can mean income for their businesses, incentive to try to game the search results has been high. If people believe that getting more clicks on a result could raise its ranking, it would not be hard for them to employ armies of low paid workers, or even cheaper bots to click their results. So Google can’t really be sure they can trust large number of clicks on a result as indicating anything real.

Mark: But what about pogo sticking, you know, where a user clicks one result, then quickly returns to results page and clicks a different one? Isn’t that a clear indicator that the user didn’t find the first result satisfactory? 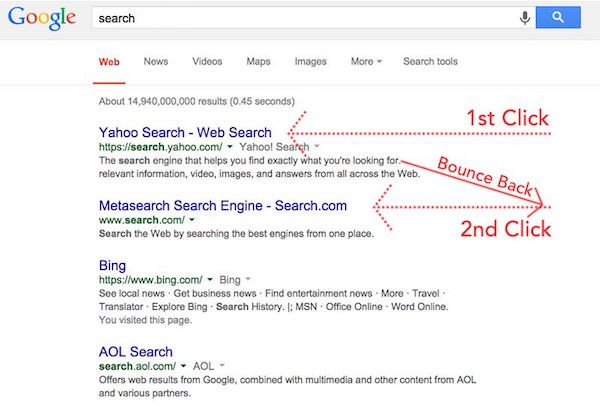 Eric: Not always. What if the user is doing comparison shopping, just wanting to see who has the best price for an item? Or, if they are doing research and want to click multiple opinions on the matter. In both those scenarios, and many others, the user was actually satisfied with the first result. So pogo sticking would not be a negative indication of quality.

Mark: Well, thanks, Eric. That makes a lot of sense. Now there is a lot more to this issue, so you’ll want to read Eric’s article on CTR as a ranking factor. In that article, Eric deals with some famous tests that seem to show that CTR affects search results and offers some useful thoughts about quality factors that more likely actually do affect your search rankings.

Eric: And before we go, if you have any SEO digital marketing questions you would like us to address in these “Here’s Why” videos, let us know in the comments below. If we use your question for a future video, we’ll give you a shout out.

Mark: And you be sure to join us every Monday for a new episode of “Here’s Why.”

Don’t miss a single episode of Here’s Why with Mark & Eric. Click the subscribe button below to be notified via email each time a new video is published.