Let’s face it. It’s getting harder and harder to get the attention for your content. People have a lot of choices, limited time, and they’re tired and weary of the same old same old.
But there’s good news: It is still possible to produce content that earns and keeps the attention of your key audience. In this episode of Here’s Why, Mark Traphagen is going to ask the King of Content, Eric Enge, why there is still hope for content marketers, and how to earn the attention you need.

Mark: Eric, we hear terms like “content shock” and “content overload” more and more. Is there really any evidence that most content is getting little or no attention?
Eric: Indeed there is, Mark. The social media measurement tool, BuzzSumo, did a joint study with Moz that revealed that 75% of brand content had earned no links. And out of the 25% that did have links, only a tiny minority had any links of significance. Furthermore, they showed that most content gets little to no social media engagement as well.
Mark: Sounds pretty bleak. So should we just give up on content marketing as a lost cause?
Eric: No, in fact, I believe in it now more than ever.
Mark: Really? Why is that?
Eric: Well, because what we see is that for those who do discover the secrets of connecting with and engaging their target audience, the rewards of content marketing are really too rich to ignore. Content remains the best way for businesses to establish brand, reputation, trust and authority, as well as to build meaningful relationships with their prospects and customers. The problem isn’t that people are tired of content. People are as hungry for information as they ever were. It’s just that everyone is aware that they have a vast amount of choice in what content they’ll spend their time on. If your content marketing rewards the time they give to it, you’ve earned their love and loyalty.
Mark: But won’t creating and promoting the kind of content that achieves those goals take huge budget? Is it true, as Mark Schaefer said in his widely shared “content shock” post, that only those with deep pockets can win the content wars?
Eric: Well, I don’t believe that only the rich will get richer when it comes to content effectiveness. At least, huge budget isn’t absolutely necessary. There are still many ways to create superbly useful content and build audience that don’t involve throwing piles of cash at the problem.
Mark: And you share six of those ideas in your article: “How to Thrive During Content Shock,” published on the Moz blog. Now, how about you share two of those tips here, and our viewers can find the rest on the URL that’s on their screen?
Eric: Okay. Well, let’s start with the power of being unique. Uniqueness is a huge asset in this game. It’s going to be very hard to get people interested in your 700-plus word article about tips for filling out a college application. Thousands of variants of this article already exist, but if you create an interactive graphic where you ask people to predict what percentage of Americans go to college by income category and then show them the right answer, you could have a hit in your hands. 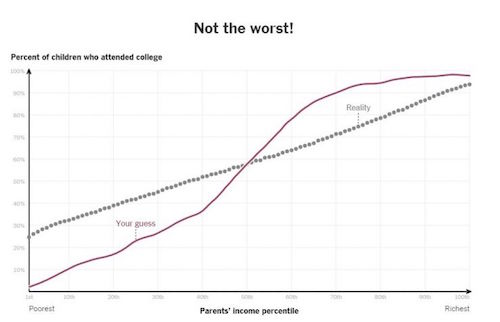 You’re looking at the result I got in this article in The New York Times. It’s fun to see how close your guess comes to reality, but more importantly, it gets you thinking about an important topic. And you’re likely to share this with your friends and see what results they get and generate a discussion. So the takeaway here is to think creatively about how you could take your content, that otherwise would just be about a mundane subject that a thousand people have written about already, and do something unique and different to make it stand out.
Mark: That’s great. Now, when I think about the success that you and I have had with content marketing to build business for Perficient Digital, I think one of the prime factors has been our efforts to get in early on trends and niches. You made that one of the tips in your Moz article, right?
Eric: Yes, I call it the “early-mover advantage,” like I invented that term. But if you’re in a market where content competition is high, look for specific niches your competitors aren’t yet creating content for. Another kind of early-mover tactic is to explore possibilities on new networks the competition might be overlooking. For example, while most businesses were dismissing Instagram and Snapchat as just a playground for teenagers, some smart brands found creative ways to post highly engaging content on those networks and won themselves huge brand affinity with little or no competition.
If you’re unfamiliar with a network and have no existing audience there, one way to gain entrance and blow up fast is to partner with already established stars and influencers on that network. For example, Hewlett Packard reached out to Vine star, Zach King, to co-create some Vine video content. Of course, that got HP exposed to Zach’s huge Vine following, 3.5 million followers. While at the same time, HP put his Vines in their TV post, instantly making their brand cooler to a younger generation. 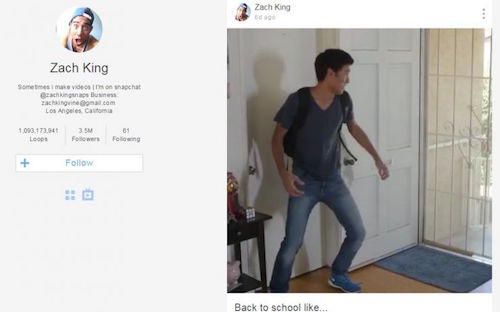 Mark: These are great ideas, Eric. So being unique and being an early mover, those are just two of the tips you find for creating content and content marketing that works in Eric’s article on the Moz blog.