How Much of Twitter Does Google Index? Future of Digital Marketing

In the spring of 2015 Google began implementing its recently-renewed agreement with Twitter that gave the search giant full, real-time access to all tweets on Twitter.
Here at Perficient Digital we had a unique opportunity to assess how much of a difference this made. We had made before and after “snapshots” of over 133,000 tweets and measured how many of them were indexed in Google Search. You can see our results here.
During his recent presentation to Boston-area marketers on “The Future of Digital Marketing and SEO,” Perficient Digital’s (and lead co-author of The Art of SEO) Eric Enge presented a summary of our findings and explained what they mean for the future of digital marketing.
Hear his commentary in the four-minute video clip from the event below. You’ll also see “as it happened” tweets from the event in the video.
You can read my summary and commentary below the video, or view the full-length presentation.

In February 2015 we collected over 133,000 tweets and then checked Google Search to see how many of them showed up as indexed. Here are the results of that study:

As you can see, only 7.4% of the tweets in our sample group showed up on Google. Why doesn’t Google index all tweets? Eric Enge stated that Google never indexes all of anything. They only index what they find valuable. Also, up until the implementation of their new deal with Twitter (giving Google direct access to Twitter in real time), they had to crawl Twitter like any website to find new tweets. (The 7.4% rate was seen over time; as you’ll see below, a much lower percentage of tweets are indexed soon after posting.)
With the new deal in place, we expected this indexation to rise. But by how much?
About a month after Google started making use of its new access to Twitter, we looked again at our sample of 130K tweets. This time we focused on how many tweets were indexed within seven days. In February, that was about 0.6%. 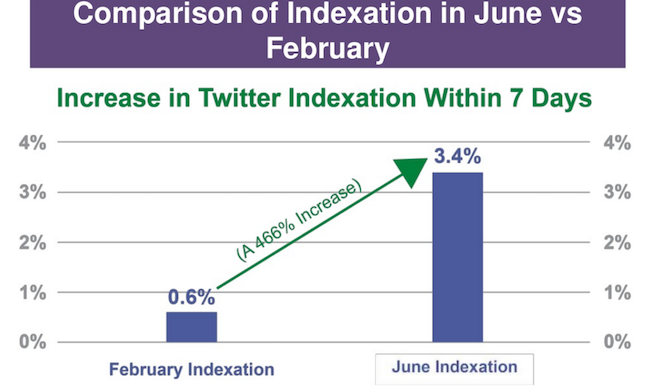 But by June, the percentage of tweets in our sample that were indexed by Google within seven days jumped to 3.4%, a 466% increase!
[Tweet “Study shows 5-fold increase of tweets indexed by Google over 5-month period last year. More at”]
But 3.4% is still quite small. This means that while there are many good reasons to promote your content on Twitter, Google SEO still isn’t necessarily one of them.
We also measured these results by Moz’s Social Authority metric (part of its Followerwonk tool) and by follower count. We found that having a higher social authority ranking increased the chances of your tweets being indexed by Google. Here are the results according to follower count of the Twitter profiles in our sample group: 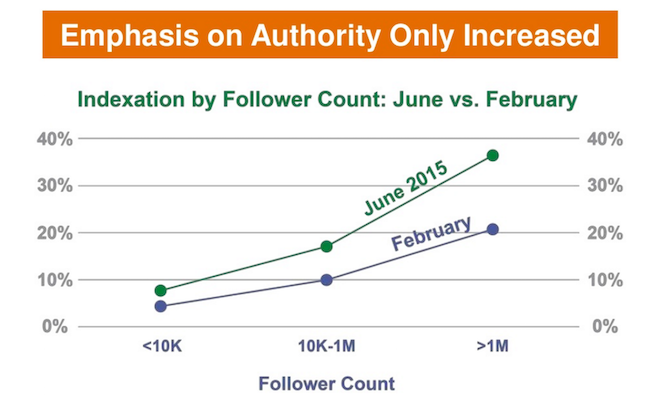 Notice that the percentage of tweets indexed for higher-follower-count profiles was even larger in June than in February.
[Tweet “Study shows that having higher authority on Twitter increases chances your tweets are indexed by Google. More at “]

Thoughts on “How Much of Twitter Does Google Index? Future of Digital Marketing”