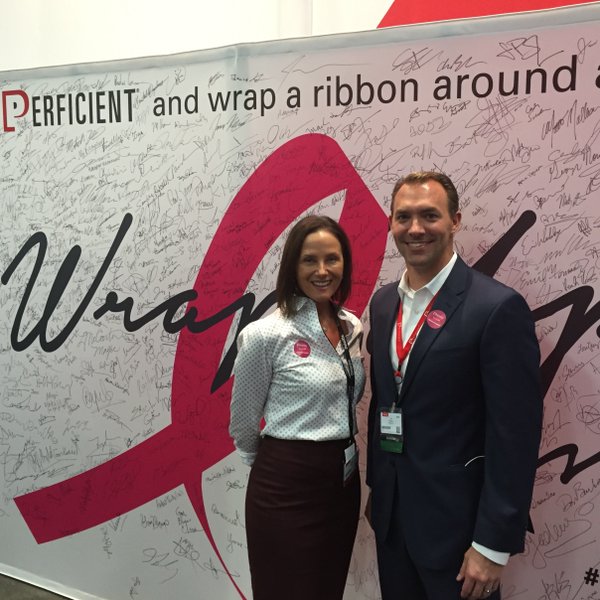 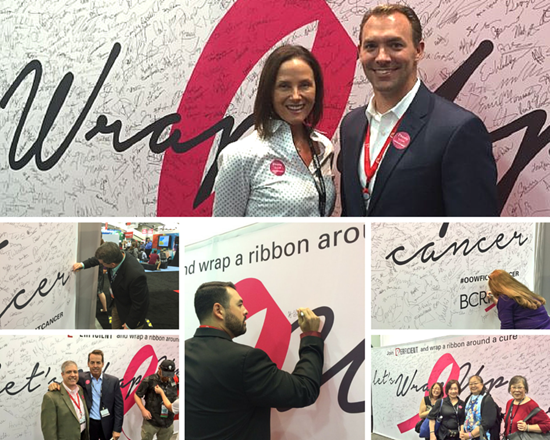 This year at Oracle OpenWorld, our team at Perficient made a special addition to our trade show booth that had a big impact on everyone involved.
Oracle OpenWorld took place during National Breast Cancer Awareness Month, and Perficient worked with the Breast Cancer Research Foundation (BCRF) to raise awareness and funds during the conference.
Visitors to our booth had the opportunity to sign a tribute wall, and Perficient made contribution to BCRF on their behalf.
The goal was to collect 1,000 signatures by the end of the four-day conference, and it didn’t take long to reach that number. Nearly 600 attendees signed on the first day, and the wall filled with 1,300 signatures by the end of the second day.
Some visitors simply signed their names in support, and others wrote special messages for their loved ones.
Our team had many interesting and meaningful conversations with those who signed the wall, said Emil Fernandez, Vice President, Perficient’s Oracle practice. Many were emotionally moved.
“Clients that visited our booth at OpenWorld already know Perficient does a lot of great things for our customers. What they learned was that we are part of something larger, give back to our community, and hope to raise awareness for a good cause and make an impact,” said Steven Bricker, Director Business Development, Perficient’s Oracle practice.
Promoting the tribute wall proved extremely rewarding and gave our civic-minded team yet another way to give back.
“The feedback was 100-percent positive. It felt good, and it was exciting to be there,” said Mariana Huber, Regional Marketing Manager at Perficient.